STATE OF THE COMPANY

I run a transparent outfit. There are no skeletons in my closet save for the ones I put there. I will therefore spare you no detail in regards to our outfit, good or bad. I am not a fur man by birth, though I have killed and skinned many people. I do what jobs I am hired to do and I do them correctly. Although it displeases me to participate in society, I am comforted that this is an industry of death. Industry though it may be, it is an industry of flesh and blood. I despise machines and will see that all activities carried out by the Fouke Fur Company are done with human hands and simple tools. If there is killing to be done, it should always be done by hand.

The few holdouts whose spirits I have yet to crush have gone into exile, splitting the company in a time of great conflict. Undaunted by this impudence, I endeavor to capture complete control over all insubordinate factions in absence of the Colonel. The Fouke Fur Company will be united as one solvent force against its enemies soon enough, whether its employees like it or not.

As it stands the forces are divided as follows. D. J. Halley has allied himself with S. S. Marks and C. A. Freeman. The three are holding out in Illinois as the Eastern Fouke Alliance. Prior to his escape, I managed to break the hands and glasses of C. A. Freeman. He shall not be making any audits in support of this auxiliary group. My scouts in the field believe they have taken with them the son of P. B. Fouke in desperate hope of holding claim to the Fouke name. This tactic shall not succeed.

S. J. Pingree and G. Donald Gibbins were in the field when the Colonel took ill and have ceased responding to telegram, effectively shutting down the U.S. Government Alaska Sealskin Dept. I have sent Indian trackers to find these cowardly men and hold them accountable. I have witnessed Pingree and Gibbins in action, and both are born administrators. They are Englishmen lost in a land so massive it could swallow whole their native island without so much as a mild expectoration. Their frail hands may wield pens with fervor, but they will be lost amongst the combative bachelor seals and the savage natives of the Pribilofs. The Aleuts would not hesitate to strike against the misplaced white skin, dragging him off to some squalid barabara for ritual torture beyond the fathoming of the enlightened man.

The turncoats carry out these actions as the great seal harvest looms just over the horizon. Should we fail the government in our proprietary duty of processing the tens of thousands of seals to be slaughtered, it will be good customers like you subjected to the lashing pangs of want. It will be your backs run ragged with the lacerations of high prices and grave delays caused by continent-wide shortages of fresh sealskin. Surely Pingree and Gibbins know that their actions harm the hundreds of thousands of sealskin consumers ready and waiting for our annual auctions. Surely they will fall in line and beg forgiveness. Else, by my hands or the piercing spears of the Aleuts, they shall suffer such that God himself will gasp in awe and admiration.

I therefore insist that, in celebration of the cowardice, insolence and mutiny carried out by S. J. Pingree, G. Donald Gibbins and similar brood, you kindly add thirty per cent (30%) to all catalogue prices. 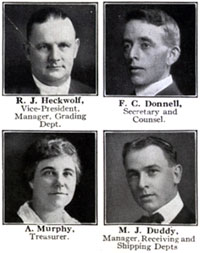 Not all employees have made fools of themselves. R. J. Heckwolf remains loyal to the cause, and with him comes the trust of F. C. Donnell and M. J. Duddy. I have taken A. Murphy as my bride and she henceforth shall be known as A. Grieves. Furthermore, I have retired her from this brutal trade and sent her to dwell in my cabin in Medical Lake, WA. There she will find instructions and blueprints for the children she is to bear me.

The rogue staff members will be caught and will be put in place. I will not tolerate division in the ranks. Such vile measures stand as insult to the integrity of the Colonel. Would a man with integrity such as P. B. Fouke appoint me in his stead in error? Could a man of such integrity even make errors? Piece by piece I will ensure that each hostile element is conflated back into the single entity that answers my every command. I, the Right hand of Fouke, deserve no less.