Fatso will not go with me through the last tunnel. He does not say goodbye. Though I hate the tenders, in a way I feel sad to see him go. The last human face I will ever see is wearing a hood.

The tunnel is wide enough for a truck. It stinks of cattle and a crisp electric smell, like a fire in an outlet. The white tiles are floor-to-ceiling, glistening and polished. The dozens of broadcast towers above are the only thing that can deaden the tone. It's not enough. Not this close to the beast.

My palm is sweating. The detonator taped into my hand feels as heavy as a roll of quarters. My boots click on the tiles and echo down to the last hatch.

I wonder what this angel will look like, what his face will tell me. They are all different, or so they say. The church raves about their beauty and perfection, but the things glimpsed on the horizon at Pleasant Plain were anything but beautiful.

Kay is yelling at me. I spent my money on a motorcycle. I drink too much. God damn it, why did I have to make her mad? I don't care. The words that spill back out are full of anger. Like she is nothing to me.

My words echo down the tunnel. I am almost there. Almost to the red hatch that opens into the sarcophagus lair of the angel they call the Hierophant.

Spencer is only recently born. Ryan is talking so much. He knows what we're saying. What we're yelling at each other.

It's out now. Not a fucking motorcycle. Not my drinking or playing pool at Donner's. I signed up.

It's the coward's way. To throw myself on the sword. Join the army for the labor passes. I've been lying to myself about it being a noble thing. I'm just plain afraid of the alternative. Of becoming outlaws. Moral threats. Of fighting for my family instead of my country.

"It's what I have to do," I say and my words are stolen by the sudden rush of air-exchangers in the tunnel.

The gusts of warm air stink of decay. Is this the smell of my future?

The hatch opens automatically, of course. The tenders are watching on their cameras.

It is dark in the sarcophagus. Despite the name, it is open to the sky. A starless black spitting rain down.

Curious fog covers the ground. Bodies, half-seen and twisted, rotting in the mud. My steps are slow. The mud sucks at my boots.

I realize the carcasses are cattle. Skeletonized, torn apart by thousands of tiny teeth or...what was that? A sound? No, in my head. Wordless, but beckoning. I cannot resist.

Something is moving within the fog. A dark shape much larger than me. I can see it now. I am so afraid. I don't want to see it. I know what it will look like now. I know what it is going to-

The white face appears from the fog. It is not a dream. It is the face. I scream but there is no sound. The rain steams from its body. Blue-gray flesh ripples with strange muscles, limbs split into thrashing appendages like tentacles. Two huge tails sway gently behind it, only barely seen through the fog that I realize is issuing from its neck.

It moves closer. I want to run, to scream. I can't move. The tone is so loud now. Even with the towers they can't keep it out. Glass lenses for eyes. One is cracked and I see the real flesh of the creature. Everything in me belongs to this thing now. Even my body refuses to work. My mind is full of it. Overflowing.

I look at my hand. At the detonator in my palm. 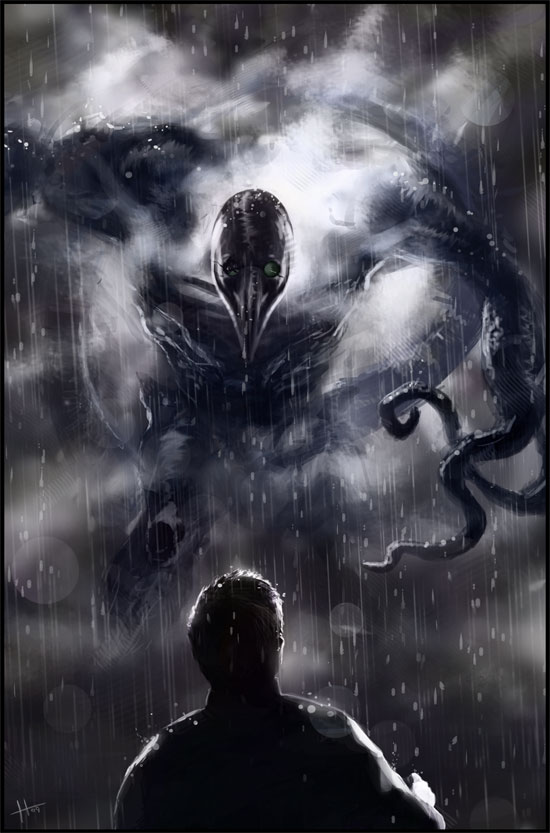 That Insidious Beast will conclude with "Master Copy"...