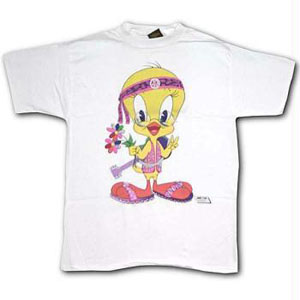 Bought it because the counterfeit FILA merchandise at the flea market was a little too chemically burned for $3.50

Have not seen the character on the front of the shirt outside of merchandise for over 20 years, except on the left buttock of the man who sired at least 1/3 of their bastard children

Are famous for their scrunchies, sweatpants, and open sores

Gave up bras long ago, and instead let the cartoon canopy shield outsiders from the ravages of "the sag"

Went to the state fair to see Journey, but were upset when they didn't play any new music

Married at 18, live in a house that smells like cabbage with at least one incontinent relative

Drive cars, the insides of which are a veritable compost heap of Cheerios, McDonald's fries, and a melange of various crushed candies and Vicodin

Could quite possibly be the only people left who still wear L.A. Gear sneakers 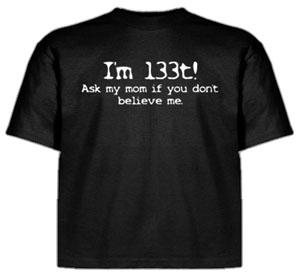 Will often greet you by saying, "Relax, I'm a goon"

Invite all of their friends to private Firefly marathons, but are soon disappointed when they realize these friends ditched them after a big Farscape argument about muppets (more specifically, Grover)

Caused a stink at the last LAN party when someone brought Mountain Dew: Code Red instead of Bawls, upsetting a vital Counterstrike tournament

Were upset when no one "got" their shirt at the latest fauxtest, not even the guy in the pirate monkey robot ninja costume who was holding a sign that said "FREE THE INTERNET ZOMG PATRICK DUFFY"

Are psychotically obsessed with the one "geek girl" in their group, but are so socially stunted that they can only trade lines from Aqua Teen Hunger Force with her and arrange opportunities where their elbows can "accidentally" bump into each other ;)

Have a "No, I will not fix your computer" shirt that conflicts with their natural interest to show that they are better than people in insignificant areas

Possess 90% of all television that has ever aired in the history of broadcasting on DVD-R, but will never let you borrow season 2 of Freakazoid because "you weren't there when Freakazoid needed you"

Are writing angry e-mails to me AT THIS VERY MOMENT!!!