One time I gave my girlfriend a hand-knit sweater for her birthday. I didn't knit it myself, I just found it in a box behind a church, but it still seemed like a pretty thoughtful gift. The next day, though, my girlfriend broke up with me, citing a bunch of totally ridiculous reasons. (She never let me borrow her pillow to make a pillow fort but I was the one who was "selfish in bed?" Okay....)

A few days later, I told my friend Elliot about the breakup. He said it must have been due to the sweater curse, an unexplained phenomenon where anyone who gives their significant other a hand-knit sweater gets dumped. The only way to break the curse, Elliot said, was to destroy the sweater.

Heeding Elliot's advice, I called my ex and asked if I could have the sweater back, but she'd donated it to Goodwill. "It was just like you," she said, "always pilled up and uncomfortable against my body."

That night, I went to the local Goodwill and looked for the sweater, but I didn't see it anywhere. Eventually, I wandered through a door at the back of the store. It led to a room where a bunch of Goodwill employees were standing in a circle holding hands. At first I thought it was a motivational huddle, but then I noticed they were gathered around a pentagram on the floor. Also, they were all wearing sweaters and the latest Belle and Sebastian CD was playing. 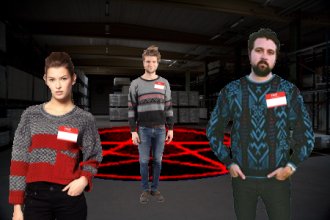 "What are you doing back here?" one of them demanded when he saw me.

"Sorry, I thought this was another part of the store," I said.

"Did you see a sign saying this was another part of the store?"

"Well, you know what happens when you assume," the worker said. "Or hopefully you do, because it involves a swear word I don't like saying."

"What's going on here?" I asked. "And why are you all wearing sweaters?"

"They fit our unique but sensitive personalities," one of the workers said. "That's why we created the sweater curse, to increase sweater donations to Goodwill. Also, single people care less about their appearance, making them more likely to shop here."

"Now that you know our secret, you have to die," another worker said. He made a signal and a dozen sweater-clad Goodwill employees advanced on me, wielding razor-sharp beard combs and cups of scalding hot herbal tea. Their eyes burned with hatred as they recited what was either a satanic chant or a Sigur Ros lyric. I needed a plan, and fast.

"Hey, I just heard the Field Mice are reuniting," I said.

"Really?" half of the workers said in unison. As they all checked their phones for news of the reunion, I slipped out the fire exit.

The next day, I returned to Goodwill with my ex-girlfriend to show her what had really killed our relationship, but mysteriously the door to the backroom was gone. My ex said I was crazy and stormed out of the store. I'm still pretty depressed about the whole incident, but at least now I know how to avoid the sweater curse. That said, I think that witnessing the sweater curse ritual must have triggered some other curse - girls still keep dumping me for trivial reasons like that I'm unemployed, curate bong hit videos and smell like black forest ham.