For the seven of you who read this page two days ago (hi mom!), you'll undoubtedly remember the heart-wrenching and nostril-twisting article highlighting the heroes of the AA-League. These brave and selfless individuals have given up their spare time to fight crime instead of going bowling. Of course the aforementioned people don't really have socially acceptable or even vaguely useful powers, but that's why they're in the AA-League instead of the big-time, high-crime profile of being a governmentally sanctioned "Superhero." Sometimes their not-so-superpowers break apart their marriages, their relationship with their kids, or their relationship with their kid's marriage, but that's the risk they take after slipping into a spandex leotard and painting flames on their forehead with an art brush they found in the dumpster behind a Radio Shack.

However, there is a darker and slightly less silly side to the AA-League. For every hero, there has to be at least one villain to have their crimes thwarted, preferably at the last moment. If the last moment is already booked up, then the hero should thwart their plans slightly earlier; as a hero, you have to be flexible like that. The villains of the AA-League are not notorious around the globe for their many failed crime capers, but for the fact that their crime capers are often so ludicrously stupid that nobody in their right mind would even bother foiling them. For example, your average supervillain usually aims to rule the world, destroy the world, or at least do something to the world. AA-League villains are lucky if they can capture a one-acre plot of land without being defeated by a 10-year old girl on her way home from grade school. Considering that the heroes of the AA-League often have a difficult time remembering their home address without the use of a Magic Marker, the back of their hand, and somebody who can read and write, these villains are considered a perfect match. Let's take a look at eight of the most popular AA-League villains and maybe, just maybe, we'll learn something about life, something about love, and maybe, just maybe, a little more of your time at work will be wasted by reading this site and the run-on sentences that I like to include because I'm not a very good writer but I guess it doesn't matter anyway since every single website is going bankrupt these days and the only entertaining sites that will be left in two years will be CNN.com and some kid's Geocities site dedicated to Charmander. 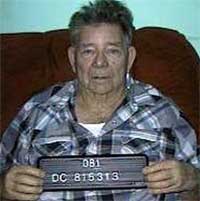 The World's Worst Dad, shown here in one of his many Police mugshots.

- He saw his kid wearing a pink shirt and called him "a filthy faggot," demanding that he go back upstairs and change into a NASCAR t-shirt.
- Whenever he plays catch with his child, he always aims for the kid's head when throwing the ball back.
- Instead of playing catch with his child and aiming for his head when throwing the ball back, he goes out and plays poker and does drugs and drinks and gambles on strippers. How do you gamble on strippers? Only The World's Worst Dad knows that secret!
- For his kid's birthday, The World's Worst Dad gives him a pack of cigarettes and immediately takes them back while muttering, "you're too young to smoke, you little bastard."
- He doesn't buy any cereal that has "sugar" listed in the ingredients. He doesn't want his kid to turn into some hyperactive filthy faggot, and that's just what Lucky Charms will to do you if you're not careful because, hey, look at that goddamn fruity elf prancing all over the place.

The World's Worst Dad never shows up at social events, and when he does, he's either drunk or throwing up. I guess Joe Don Baker technically falls into this description as well.

Henchmen Henchman - Supervillains often employ the services of various henchmen to do their dirty work for them. Henchmen are known as the "can do" guys, the utility workers who have no problem mopping the nuclear missile silo one moment and then getting beaten up by superheroes the next. Not a single member of the Henchmen's Union has ever been able to defeat a superhero in any type of combat whatsoever. The only time they even have a chance at succeeding in any way possible is when about 500 of them gang up and try to subdue the superhero by holding his arms back or shooting a flying net on top of them. However, there are just some jobs that the Henchmen can't get around to accomplishing or simply refuse to do out of their limited dignity; this is where the Henchmen Henchman comes in. He's the henchman for other henchmen, the guy who makes sure all the worthless bolts on the Laser-O-Zapper Ion Beam Cannon are tight and the bathrooms are fully stocked with paper towels (those air-drying hand things are just lame, even to supervillains). When the henchmen have all been beaten into non-bloody pulps by superheroes, it's the Henchmen Henchman's job to bring out the medical kits, swab their wounds, and feed them chicken soup. Henchmen Henchman also takes out the trash, paints decks, and washes villain's cars. 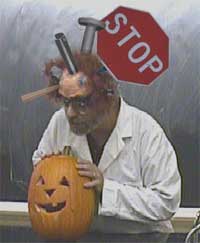 Oh no, what evil scheme is Doctor Shrapnelhead up to now? Who knows, but chances are good that it's very stupid and won't work. At all. Ever.

Doctor Shrapnelhead - When he was a young child at the age of 8, Doctor Shrapnelhead was involved in a horrible accident in the National Museum of Magnets and Social Studies. A terrorist organization, known as Rage Against the Magnets, planted a bomb disguised as a different kind of bomb disguised as a cardboard cutout of "Mannequin 2: On the Move." The explosion caused deadly debris to shoot throughout the air, and a large magnet crashed into the side of his skull, embedding itself in his cranium and amplifying the "evil" portion of his brain. Unfortunately, it also cut off the "common sense" part of his brain as well, so every evil weapon or plan that Doctor Shrapnelhead devises is intensely retarded. Here is a list of the last six items he built in his "secret laboratory," which is just his ex-wife's garage:

- A ray gun that turns donuts into gum.
- A ray gun that turns gum back into donuts.
- An electric hat that, when activated, allows the user to experience the sensation of being electrocuted.
- A box that conceals items when they are placed inside the box and taped shut.
- A time traveling machine that lets you travel forward in time at the rate of one second per second.
- A trick sundial. The "trick" is that it's not really a sundial, it's a rock with a postage stamp affixed to one side of it.

To add insult to injury, the magnet in Doctor Shrapnelhead's skull continues to attract metallic debris and surrounding objects, causing them to implant themselves into his head. He's amassed a collection of over 143 different pieces of shrapnel in his brain, the earliest being the end coil of a Slinky from 1972.

Radio Head - In a frightening merger of man and machine, Radio Head is the result of combining a radio with the body of, well, a human body. Although Radio Head cannot see, hear, talk, or even think, he does have a radio for a head. If that doesn't scare you enough, the radio plays Radiohead music nonstop, thereby attracting a group of hipster dorks who think they're intellectually superior to everybody else on the planet because they like listening to really shitty music. Some day Radio Head's creators hope to equip him with both Aphex Twin and Tool songs, turning him into the world's biggest whiny college student magnet. 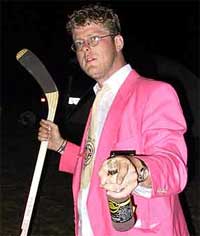 Don't try to avoid the Lifetime Network Ex-Husband Man or try to get a restraining order... he's above the law!

The Ex-Man - She used to be a man but now she's a woman! The Ex-Man lures unsuspecting men into dates via AOL chatrooms or cleverly placed classified ads in the local paper, asks them to come up for "a nightcap" (whatever the hell that is), and then, after performing oral sex on the man and getting him to climax, reveals the secret that she used to be a man. This devious and underhanded trick is particularly able to fool guys who have something stuck in their eye and causes everything to look blurry.

Tetris Master - Ever play Tetris and get all your blocks stacked up into a huge, neat square while you waited for that elusive 4-squared long straight piece to fall down? Well Tetris Master makes sure that you get a nonstop barrage of those squiggly little worthless pieces that you can never do anything with. He's currently devising some scheme to make triangle-shaped pieces available, but he hasn't quite figured out how he'd be able to accomplish this since he doesn't even have his GED.

Wow! What a not-scary and non-frightening trip into the world of AA-League Villains! Keep in mind that these people could be standing next to you and you'd never know it. Well, unless you're at home alone or you happen to notice that the guy waiting next to you for the bus is wearing a cape and has a large picture of a toaster stitched onto his chest. Hats off to you AA-League heroes and villains! We salute you on your ability to continuously fail without ever giving up. In that regard, this website is a AA-League Hero as well! Hats off to us, who are currently not wearing any hats because we took them off for the AA-League heroes and villains, as mentioned before. 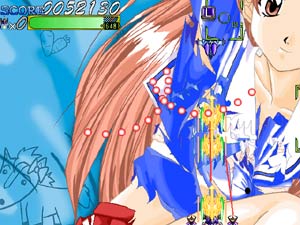 The stage opened with me shooting her socks off and as I traveled up her legs while simultaneously battling the boss, I was treated to a view of her panty-clad crotch. The image of my ship thrusting violently towards her groin while the boss tried desperately to ward me off was only made more comically disturbing when targeting boxes began to spring up on her panties.