Maybe it's the warm summer air that's filling my head and making me forget the murderous video game-inspired thoughts I normally think, but lately I've had a sort of primordial longing. And no, I'm not talking about an erection, but thanks for wondering. I've been longing for the arrival of a lot of things, particularly things that that have been promised to us by the news media, by politicians, and by everyday crazy people like you and me. You know, the things that are going to make an impact on life and the world, changing the flow of the very air we breathe for better or worse. As part of a sort of unsanctioned and dangerous reminder service, I want to list the things that need some sort of closure. If you're in a position to bring closure, please do, so long as it doesn't involve my death.

The Discovery of Weapons of Mass Destruction in Iraq 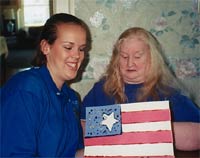 Was this cake baked with deception and frosted with lies?I'm awfully disappointed no weapons of mass destruction have been found in Iraq yet, because I was promised they would be. In fact, I was told this every day for close to six months. Even now, with the war having been a tremendous victory for the human spirit, I am still being told that weapons of mass destruction will be uncovered. I can imagine my government lying to me, since that's pretty much their job. They don't exactly have a long track record of honesty and integrity to back them up, either. But what I just can't tolerate is the British government lying to me. Tony Blair, the Supreme Overlord of the Britons, assured the world that they would be found. Was he lying? And if so, does he think he can pull a fast one on us, the world's only Superpower? I think it's time for America to take a good long look at this so-called "United Kingdom." Just whose side are they on? It sure doesn't look like it's our side.

Back to the issue at hand, each day thus far has been an exciting new opportunity for weapons of mass destruction to be discovered, but each day ultimately ends with the same disappointing sunset. Maybe the Iraqis hid the weapons really well, like under some flying carpets or in a magic lamp or something, I don't know. My knowledge of Iraqi culture comes mostly from Ray Harryhausen's Sinbad movies. Really, though, I'm starting to think that there never were any weapons of mass destruction in the first damn place. As an advocate for hard times and the impending global apocalypse, I'm disappointed whenever a potential murderous despot loses his insane grip on the world. How the hell am I supposed to have my very own apocalyptic themed adventure if everything is hunky dory? Come on Kim Jung-Il, you crazy bastard, the ball is your court!

Totally Mind-Blowing, Earth-Shattering Sequel to 9/11
We were all but guaranteed that terrorism would become a daily part of our lives. At least here in the United States of America, anyway. It has, to some extent, because that's all the government and news can talk about. The problem is that for all the talk, it's just not happening. I'm not saying I want suicide bombers blowing up my local Super Wal-Mart and denying me of the precious back to school savings I so desperately need, but I also don't want stupid colored terror rating systems telling me how high the likelihood of such an event is. Terrorism just isn't happening here, so all this talk is pointless. Like most people capable of absorbing and digesting daily events, I am quite capable of realizing that tragedy can strike at any time. Being reminded of this fact and encouraged to hoard duct tape and gird my home from invisible bio-toxins simply doesn't do me any good. I may be a tad on the morbid side, but it's kind of a downer when the government tells you there is a good chance the world will go kaboom and then nothing happens.

Honestly, I just don't think the terrorist have what it takes to deliver a truly worthy follow-up attack. They zinged us pretty good with a genuinely creative and surprising plan involving planes and important symbols of capitalism, but what are they going to do now? I'd be pretty damn disappointed if their next action is something generic like blowing up another building or sending toxic mail to useless senators and elderly journalists. They really need to innovate and raise the bar to a new level of destruction. I realize they just want us dead, but that's no excuse for them to settle for mediocrity. Face it; if you're going to die senselessly in a heinous attack, it might as well be one somebody put a lot of time and effort into. 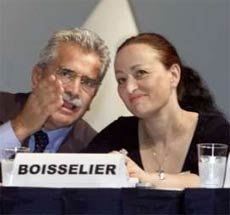 It's the crazy clone lady! She has a face only medical science could love! Somebody cloned ugly all over her face! Am I right or am I right?Although there is a good chance I simply imagined the whole thing, I do seem to recall a rather whorish looking woman – a boxcar virago if you will – coming on TV and telling the world that the very first human clone was born. Seeing as how the Bible clearly outlines that cloning is a sin, this immediately brought about fiery wagonloads of condemnation that raced alongside bandwagons of disdain. I myself recall falling to my knees in emotion while raising my clenched fists into the night sky screaming, "what terror has medical science wrought?" in a fairly dramatic manner. Actually, once I got past the scary science lady's jarring appearance, which seemed to mimic the characteristics of a grisly rental car accident, I was a bit thrilled. Cloning revolutionizes the boring old methods of producing unwanted children by taking pretty much all the fun out of it and adding tons of weird steps. Instead of just having sex and then letting nature and possibly witchcraft carry things to screaming, bloody fruition nine months later, you can embrace the startling frontiers of science, where sophisticated science tools invented by scientists make science come alive – in your womb! I assume somewhere in the equation a pill is manufactured, and this pill contains all your memories and traits and makes you pregnant with your clone when ingested.

The downside to this daring breakthrough in science is that the people responsible for the cloning miracle, a crazy ass religious cult, forgot to offer up proof. To this day their claims of cloned babies remain unsubstantiated, which is a real shame. I looked forward to seeing those wacky clone kids in a zoo some day or at the very least spitting on them and uttering scathing futuristic slurs for clones, such as "Gene Scene" or "DNA Duck." None of those slurs are particularly logical or hurtful, so I guess it's for the best.

The Resurrection of Yuri Andropov 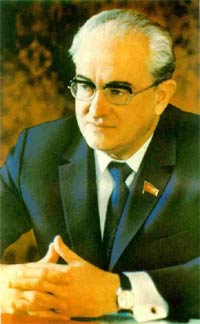 The man everybody can't stop thinking about.I know a lot of people eagerly wait for Jesus Christ to return, but I think he's pretty much missed his window of opportunity. Isn't there a statute of limitations on that sort of thing? Well, if not, there should be, because nobody likes a spiritual slowpoke. Somebody who definitely hasn't missed his window of opportunity is former Soviet leader Yuri Andropov. He may be dead, but he certainly isn't forgotten. It seems like I can't go a single day without hearing somebody reminisce about the golden days of Andropov. It's hard not to think of Yuri, who is famous for the various things he did when he was alive. Yes, if there was ever a time for Yuri Andropov to return from the dead, now is probably about as good as any. Come on back, Yuri!

Hilarity to Ensue
Wait for it… Wait for it…. Ah, screw it, it's not happening here. Maybe this weekend when wonder twins Frolixo and Greasnin do their updates.

I'm pretty sure it was either a wise Indian or perhaps my caseworker that said, "promises are meant to be broken." And while I'm pretty sure they were just taking the old phrase "rules are meant to be broken" and breaking it, it still goes a long way in ending this update with a thoughtful quote that everybody's heard before. I guess that means most of these promises, whether they be about nuclear weapons in strange Arab lands or children produced in terrifying experiments conducted by some harpy in a lab coat, we can expect them to be broken. Finally, on a positive and unrelated note, Zack Parsons has been lying to you. Hermione actually dies when she bites off Harry Potter's finger and falls into Mount Doom.

Hey boys and girls and boys that get beaten up for looking like girls, Taylor "Not Livestock" Bell here. It seems everyone's favorite Haunted Whorehousekateer, Mista T, has masterfully crafted another review of a UT2k3 map that is severely lacking in goodness! And if you don't believe me, let me inform you that the map is called Beta Funnel 2k3.

The map does not look like a funnel to me, but rather like half a barbell, and a pretty poorly made one at that. Actually, I could also say that this map looks like a bad rendition of Rosie 'O Donnell eating half of a goat, but it wouldn't be as accurate as the aforementioned description. There seems to be only one texture in this map, and it's a bland, rock texture. At least the walls aren't some kind of atrocious tye-dye-esque, swirly puke crap, so thank God for small favors.

Read the review quickly before ol' Steve gets mad and starts ripping out his own teeth and flinging them at you. I've had it happen to me, and it is not pleasant.