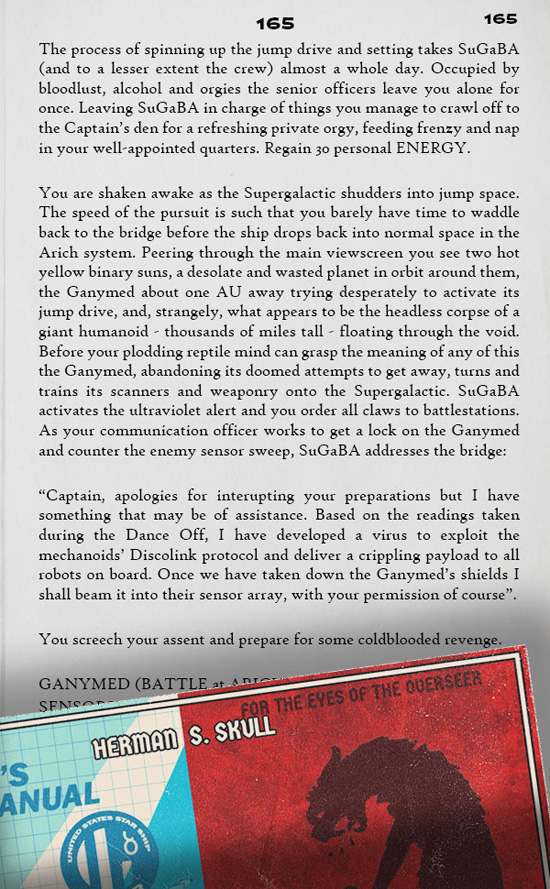 I blocked off the Ganymed's stats because we need to pick a replacement crew before we duke it out. If you don't have any preferences then I'll shuffle the deck and pick randomly.

Leave our crew replacements to Fate.
The crocs don't know what the hell they're doing and neither should we!

The crew is selected: 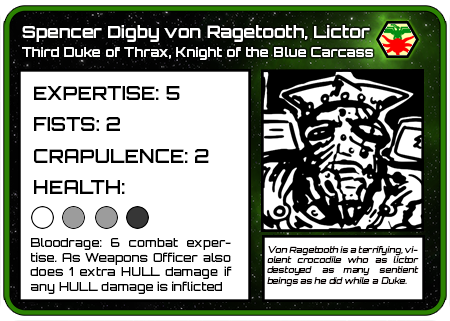 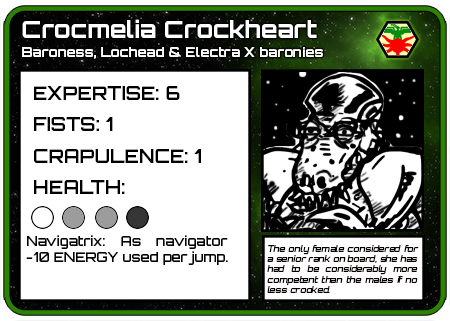 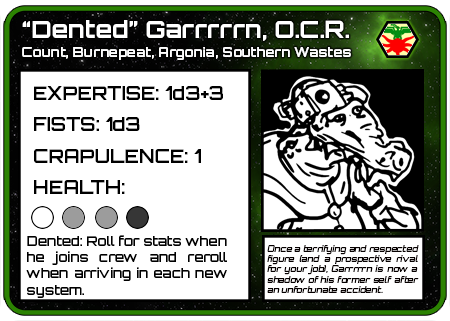 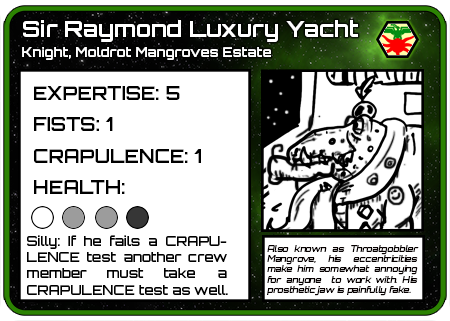 We begin the battle against the Ganymed: 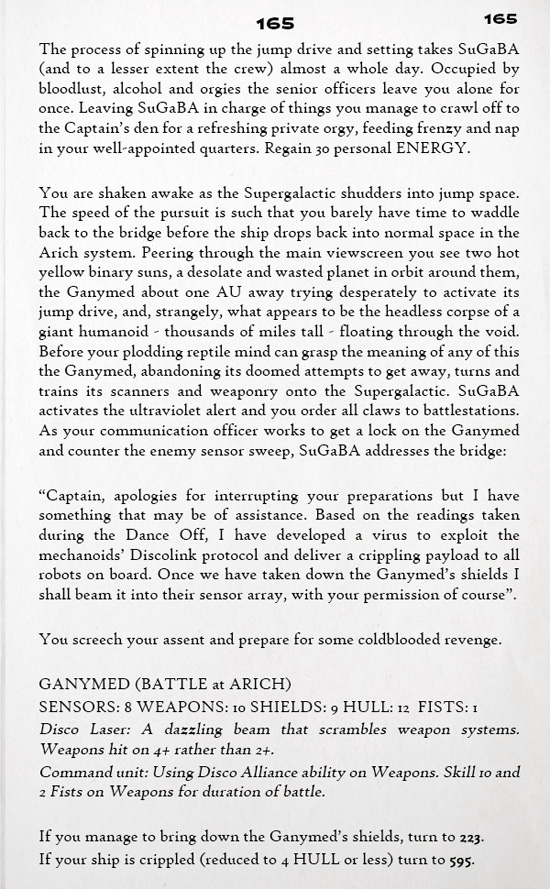 As soon as the fight starts we empty the Cloaca, covering ourselves and the space around us in filth. This allows us to get the drop on them and we fire first, hitting them, knocking their shields out and tracing a melty line into their hull with the Meson Beam Cutter. 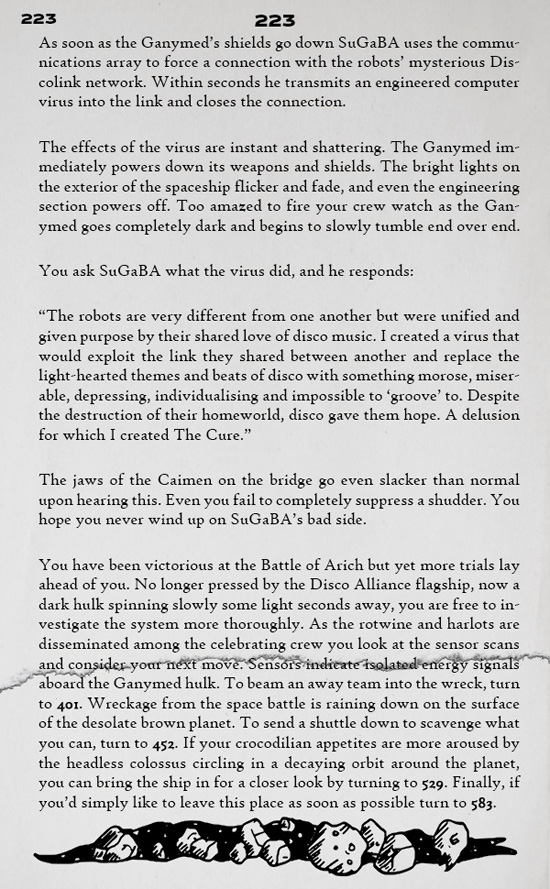 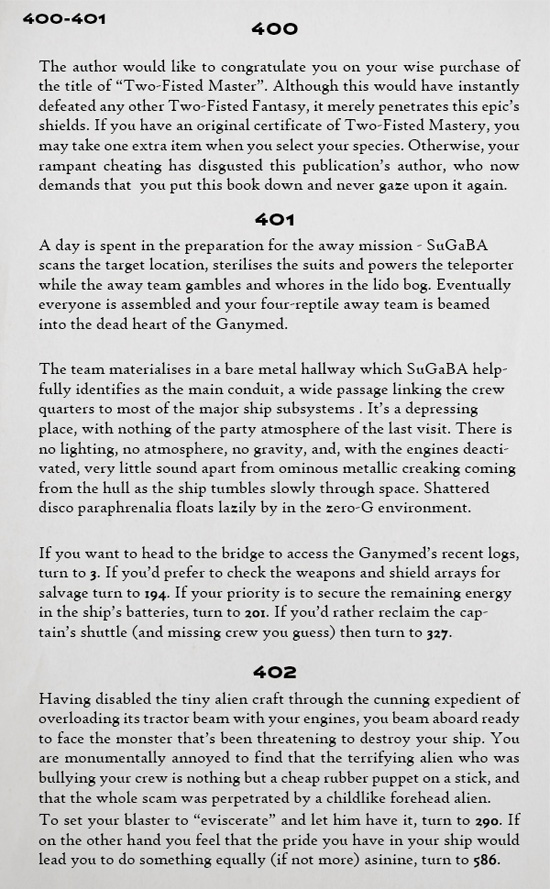 For once we can see all the available choices on the page, but if you prefer this might be a good time to crack out one of the expansion packs for the game. I have the "Blood and Treasure" pack, which adds options during most of the boarding actions in the game, including this one. It's more or less a pamphlet of extra paragraphs that add a bit of risk and reward. It came in a packet of the most revolting cereal I ever ate. "Space Flakes with Meaterite Chunks." It might have been the worst but most appropriate cross-promotion in marketing history. 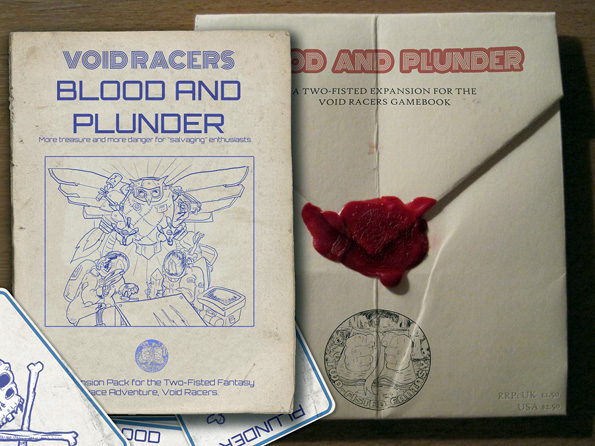 If we're going into the expansion, I might as well tell you something about these things. A number of expansion packs were released for several years after (and, confusingly, a year or two before) Void Racers came out. They usually came in an envelope and included a short booklet that had about 24-36 new entries, possibly a new game mechanic, a few item and crew cards and maybe a dice or map or something like that.

At the start of each booklet, the expansion tells you what paragraph numbers and situations will allow the expansion to link up to the book. In the case of Blood and Plunder, it's whenever the player boards a spaceship belonging to one of the main civilisations and one of the entries (G) is linked to 401 in the main book. These are usually meant for experienced players who want to wring a little more out of what was an expensive book at the time and who won't be worried by minor spoilers in the booklet's introduction.

Here's the page we've jumped to, which starts off the "rescue the crew and mess with technology we don't understand" chain (G): 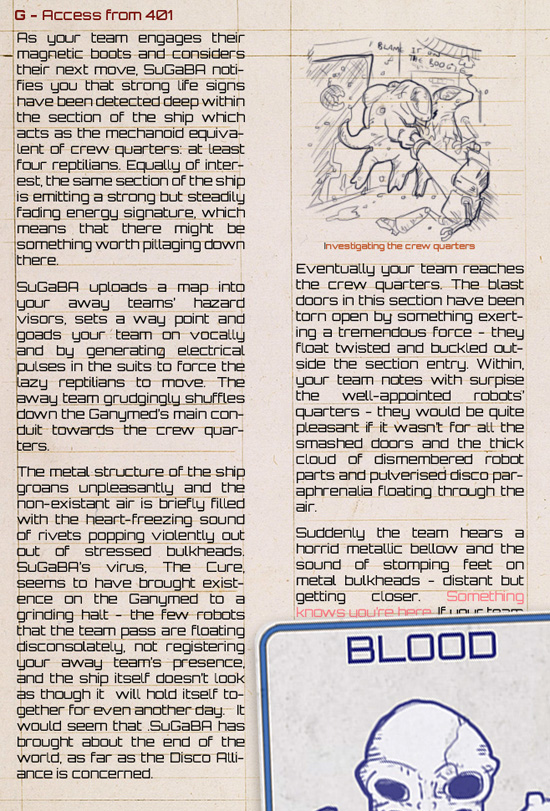 The quality and condition of this pamphlet isn't great (they cut corners like mad on these things to make money on them), but we're only going to be in it for a couple more pages. Unfortunately I accidentally scanned a card on top of the page and I'm too tired to re-scan it, so what's the next move?

Panic Prepare for combat, try not to get killed by the space monster.

bravely send a redshirt to investigate.