Having recently graduated college at the time, I was still living at home and about to move out after the holiday season.

My mom informed me that she was going to give me one of the best presents I would ever receive in my life.

On Christmas morning, in front of the family, she hands me a large blue bag. I open it up and there's a big blue quilt. I question why the quilt was so great, at which point she says, "Well turn it around."

I turn it around and see 16 individually stitched squares with symbols that were all familiar to me. After looking at it for a second, I realized that these were all from some of my favorite shirts.

"Oh, did you make copies of my favorite shirts and stitch them into a quilt?"
"....No."

My mom had snuck into my room about a month earlier, taken 16 of my favorite shirts which were irreplaceable, cut them apart and stitched them into a quilt. A quilt that is currently sitting in my closet gathering dust.

But hey, who needs 16 shirts right?

A friend of my grandmother's, who I have only met maybe once, used to give me a porcelain doll for Christmas every year, until I was about 18. I guess that's not really terrible, but I was always into "scary" movies and shows and books, so I thought they were super creepy.

When my mother died when I was 16, I received some flowers, which I assume were from the woman, with a little notecard attached that said, "The dolls will still come" and nothing else.

One year, my crazy cat lady grandmother gave me a porcelain doll. These are generally creepy enough on their own, but then she decided to say it looked like me.

It was really hard to be polite about that one. Not only was the doll creepy, but it really didn't look like me. It had long, obnoxiously curly brown hair and green eyes, and generically pale skin. Sure, I have brown hair, and I'm female, but that's about where the similarities stop. I was actually pretty offended, but I tried to be nice since she lives in another state, and I rarely see her or got anything from her.

Later on I found out she won it at a bingo game, so it's not like you can even say it's the thought that counts. She just happened to have it sitting around, like the millions of other trinkets she gets from bingo games.

My extended family has agreed to only give gifts to the "kids" (everyone under 18) from here on out.

Sadly this hasn't stopped my crazy Aunt from giving out all of her garbage, each with a teary story connected to it.

Last year I got a creepy-as-fuck witch puppet with a hook hand.

She claimed it was my grandma's favorite, even though the other aunts told me in private that they had never seen it before in their lives.

My ex husband (don't get married when you're 18, y'all) used to get me a coffee maker for every gift giving day. Really shitty, cheap ones. I tried to gently discourage him from getting me coffee makers. You know "I really only need one" "The old one works fine" etc, and then eventually just to straight up "Do not get me another fucking coffee maker"

I love bears, but the thing about bears is that they are specifically a present that my best friend and I share, nothing more. No one else has ever bought me bear-themed items, because it would be a shitty gift idea coming from anyone else.

One of the recurring doodle characters I've conjured up is "super fart girl" who fights crime with farts. It's a stupid joke character that I draw when bored.

A few years ago, my boyfriend at the time decided that these were my two main interests and that combining them would create the ultimate christmas present. He headed over to build-a-bear workshop and made one himself. Not only did he pick one of the bears that my best friend had already built for me (that I had sitting above our bed that we slept in together every night for the past several months), he dressed it up in a spider-man outfit and had a sound-bite put into it that he recorded himself. It said "*loud fart noise* Merry Christmas, I love you!" He called it super fart bear, my new sidekick.

The moment I saw him pull out the build-a-bear box my heart immediately sank. I've never been so bad at feigning excitement over a shitty present before. 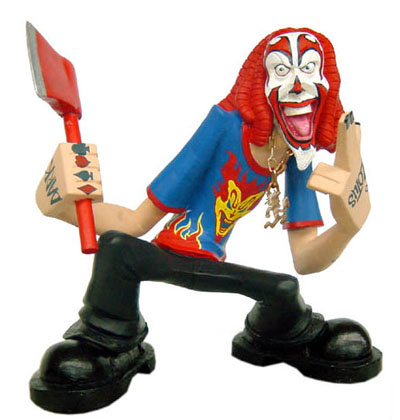 My dad's best friend gave me this thing for my birthday one year (I think I was like 16). I wasn't quite sure what to think since I had never even heard of ICP at the time, so I just threw it in my closet with a bunch of other junk. In retrospect though, I'm insulted that he would ever think I would appreciate something like this.

when I was younger, my brother got a part time job to support his smoking habit; he lived at home, rent free, and didn't pay for shit. So in theory he had money for Xmas. For my mom, he got a cheap white tinsel Xmas tree about two feet tall, on clearance from his work. For me, he got a $3 rubber chicken "for my clown act!" Nevermind that I hadn't done clown work in years.