EXPECTATIONS: All of the buzz surrounding this film revolves mainly around Bruce Dern, who is an actor I forgot people cared about. Did they ever? He's never been a big name, but he's always been a great character actor. The kind of guy that is currently in his "random cameo, semi-retired" phase, then appears in everything. Like a poor man's Harry Dean Stanton. Actually, that's a pretty good way to sell me on a film.

REALITY: Frequent readers will know that one of my favorite sub-genres of film is the "Father-Son Road Trip" movie. And by that, I actually mean "I really like A Goofy Movie." By forcing us to take a look at ourselves and examine our connections to our roots, these films make us question how much of what makes us who we are is original, and how much is inherited. Nebraska adds another question to the mix, however: If nothing in a film, or in a life, is really all that bad, does that make it inherently good? 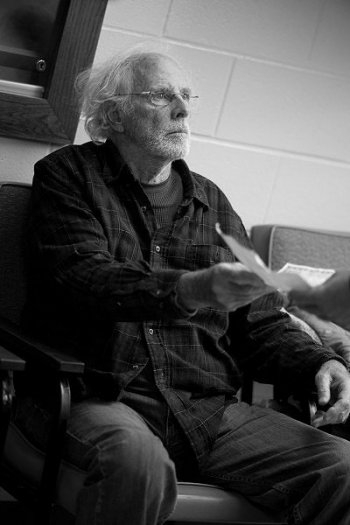 Nebraska follows Woody Blake (Dern), an elderly alcoholic slipping into senility who believes that he has won a million dollars when he receives a sweepstakes letter in the mail. After attempting multiple times to walk from his home in Billings, Montana, to Lincoln, Nebraska, where he will claim his winnings, Woody convinces his youngest son David (Will Forte) to drive him there. David, of course, realizes there's no million dollars to be won, but since his girlfriend left him and his job is going nowhere, he really doesn't have much to do anyway. Fortunately, the film skips over much of the journey, because that would be two hours of the most boring scenery in America. Instead, it waylays the travelers into Woody's hometown, where his extended family and old friends learn of his "winnings" and are ready to pick the disoriented man clean.

This is where the film excels: Capturing the weary sadness of extended family. Most of the authenticity of this film comes in awkward, uncomfortable silences. As David tries to connect with his redneck cousins who only can talk about cars and driving, or as all the men of the family stare blankly at a football game endlessly, the audience relates to it with a sad hilarity that I don't even know a word for. In any case, Nebraska's best moments come from making us explore that tenuous connection of extended family, people we don't have anything in common or even necessarily like, but still are forced to associate with because of arbitrary blood relations.

Bruce Dern and Will Forte both put in strong performances, with Dern having fun making the audience question exactly how lucid Woody is at any given moment. However, I found myself much more drawn to the supporting cast than either of the leads, particularly June Squibb's performance as Kate Grant, the frustrated and short-tempered matriarch of the family. Kate's disdain for Woody's family and town is not well-masked; neither is her misplaced anger at his confusion. Squibb's candor and bitterness is delightful, as she wanders through the town explaining family history to David for the first time, not bothering to spare details for propriety. Also worth noting is the always-good Stacy Keach, who reprises his role of "Smooth-Voiced Bastard" from Every Single Thing Stacy Keach Has Ever Been In. It's a role he plays well, but here there's an extra hint of sadness to it, as everyone involved knows his character has no real power, either inside or outside the town.

Speaking of smooth bastards, Bob Odenkirk also puts in a fun supporting role as David's brother, Ross. Continuing with the theme of "managing frustrations", Ross is the only person in the film who could be seen as remotely successful. At first, the film sets him up to appear jaded and resentful, but Odenkirk is better than that. As the family bands together over Woody's delusion, Ross is essential support for David, a voice of reason that is also willing to fight for his family's dubious amount of honor. There's also a fun bit of characterization here: It's worth noting that Ross clearly has his mother's temper, as well as her slight bit of drive and ambition, while David is more content to drift through life like his father. 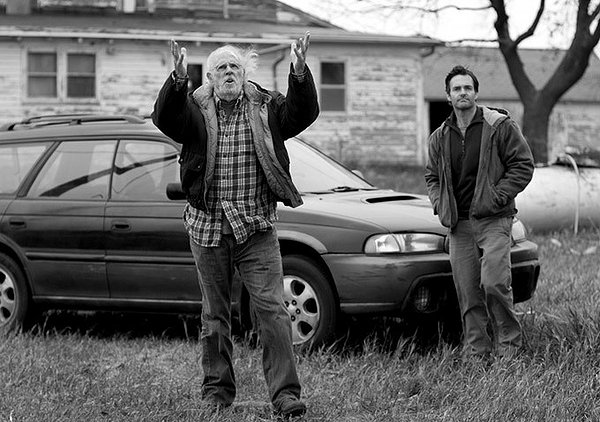 I mean, obviously he's gone off the rails a little.


The stark but softly shot black-and-white landscapes and the low-intensity dialogue give Nebraska a charming, pleasant feel. This is a relaxing movie, a Sunday-afternoon background film. There's certainly nothing wrong with that, but it keeps the film from achieving anything great out of all of its good pieces. It's certainly funny and clever enough, and it's never boring, but the fact remains that I could essentially put Nebraska the film on mute and play Nebraska the Bruce Springsteen album over it, and my experience would be essentially the same. (This is probably not true, but now I want someone to try that in a "Dark Side of Oz"-style experiment.) My point is, this is a pretty good movie. But it is also a pretty great screensaver, and that's a problem.

A common theme thoughout the film is Woody's family asking him "Why do you even need a million dollars anyway?" This is a fair question, since Woody is attempting to travel 750 miles for money he wouldn't know how to spend anyway. In fact, prior to the introduction of the non-existent money, no one seems to realize that they wanted anything. Yes, I mentioned earlier that Ross is more ambitious than David, and his life is certainly better, but David doesn't seem to be aware of it. He's barely aware of the banality of his own life, which is why his girlfriend leaves him. (Another thing he barely understands.) So we are left with, appropriately enough, an unambitious feature that questions the very necessity of ambition. It also questions my ambition as an audience member. This is a good film. Did I need it to be great? Well, no, I suppose I didn't. I am quite pleased with the film as it is. But at the same time, "eh, you've seen worse" is a really lazy metric against which to measure yourself, Nebraska.

MINORITY REPORT: For whatever reason, I always confuse Bruce Dern with Paul Sorvino or Lawrence Tierney. None of them resemble each other, and the only thing they even have in common is that they all have daughters who act. I would suggest they team up for a movie, but it would probably just wind up being one of those wedding movies where everyone gets together and does nothing for two hours. - Joseph "Jay Dub" Wade