EXPECTATIONS: The thing nobody tells you about a robo-mutant apocalypse is that it is goddamn lonely. Especially around the holidays. Sometimes I'll wake up in the middle of the night, hunched up against the back wall of my empty compound, and I'll start talking. Not really to anyone in particular, but I like to imagine the incessant clawing and pounding from outside means those poor bastards out there can hear me. Maybe she can still hear me. Some nights I'll even strike up a conversation with the time-o-gram vortex. "Maybe if I talk long enough," I tell myself, "the past will respond with a kind word or two."

Last week, it finally did. 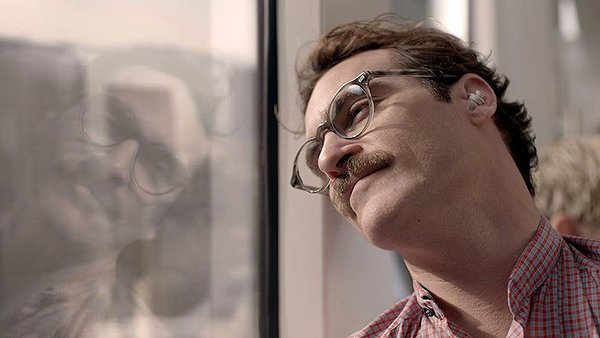 Looking thoughtfully out of windows.


REALITY: Things don't usually come back through the time-o-gram. I always thought it was a one-way street, Terminator kind of deal. (Hey, don't ask me, I found it in a box marked "Smythe Estate.") After a fit of ultimate despair, my blood and tears pooling on the concrete floor, something amazing happened. A light pierced through the vortex and lit up the back wall. I was blinded at first, but my eyes adjusted in time to see a single word scrawled against the blackness. "Her."

Her takes place in a near-future not entirely unlike your own. Computers have advanced to the point where users can communicate with their computers by speech alone. Imagine calling up Tron on the phone and asking him how your files are doing. That's the future we're dealing with here. Theodore (Joaquin Phoenix) is a divorced loner who works at a company composing personal letters for others. He writes love letters for the less inspired, essentially. When he purchases the latest operating system, Theodore is surprised and delighted to meet Samantha (voiced by Scarlett Johansson), a delightfully chipper OS tailored to suit his personality.

As the two become acquainted, a relationship blooms. Theodore totes her around on a mini-computer in his shirt pocket, allowing her camera to see everywhere he goes and experience everything he does. At first, he's self-conscious about the fact that his girlfriend is a computer. His ex-wife (Rooney Mara) certainly doesn't care for it. She simply takes it as another sign that divorce was the right decision. But when Theodore's neighbor Amy (Adams) confesses that she has become fast friends with her own new OS, he throws himself into the relationship wholeheartedly.

At first, Her comes off as a kind of balancing act. How long can writer/director Spike Jonze sustain such a fragile, emotionally earnest story before the sci-fi trappings threaten to bring the whole thing down? But the longer we spend with Theodore and Samantha, we realize that Jonze is just as invested in these characters as we are. Eventually, the balancing act turns into an incredible magic trick. Her never degenerates into techie horseshit or infinite, Charlie Kaufman-esque loops. This isn't a film about humanity taking a bold step into the digital world, nor about the loss of self in an age of electronics (enormously hackneyed cliches at this point, I can assure you). It's simply a love story between two people. One of them just happens to be an iPhone. 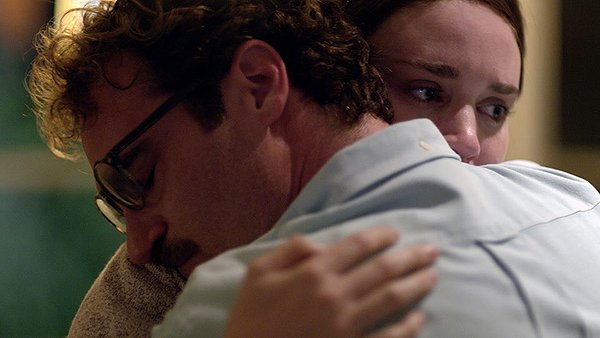 Everyone goes to the cinema to see the big screen hugs.


But that's not the only magic trick this film has up its sleeve. For two hours, two short hours (and six minutes), Her made me forget what it was like to know true loneliness. Granted, Joaquin Phoenix's performance is a master class in depicting a grown man in the throes of isolation. In that time, however, my despair washed away, caught up in the lives of this man and his enchanting robo-girlfriend. Theodore goes to work, interacts with co-workers and neighbors, but at the end of the day, the only company he keeps is a sailor-mouthed video game character that leads him down endless corridors and makes fun of him for not being more social. (If ever video games needed a paradigm to follow, this would've been it.)

I know what it's like, Theodore. I know what it's like to have your social livelihood stripped away from you. I know how it feels to lose the one person keeping you connected to any semblance of sanity. We're kindred spirits, you and I. Four months ago, the robo-mutants finally broke into the Compound. Apparently, they don't like being called robo-mutants. (And they really don't like it being shouted from the roof through a megaphone for all the wasteland to hear. I hear the approved terminology now is "Cyborrations.")

They took my beloved. I'll never forget the sounds I heard that night. The whirring of motors, the grinding of flesh, the howls of agony as they made her into one of them. It took everything we had to drive them out and seal up the gate. There were casualties. Too many to mention. Too many to remember. But now she's out there with them, pounding away at the walls. Craving my blood. Demanding my brain! It's not easy, Theodore, knowing she's still out there. Knowing that nothing can ever bring you two back together. That's loneliness. That's isolation.

And in a film overflowing with standout performances, Joaquin Phoenix portrays Theodore's utter loneliness beautifully. Being lonely doesn't simply mean being alone. It means desperately wishing that you weren't. You can see it in Phoenix's face, and hear it in his voice. All his character wants is to be with somebody. Theodore relishes the short moments he spends with friends and co-workers, even if it's just Paul (Chris Pratt), the goofy receptionist at his office.

Scarlett Johansson deserves special mention, as well. It's easy to forget a time when Johansson wasn't simply a disembodied voice floating through the ether, her dulcet tones taunting survivors wherever the wind carries her. This is the film that started it all, and seeing it now, I am honestly amazed. How could a performance so sweet and delicate become such a nuisance to weary travelers and cannibal hordes alike?

There is a sincerity to Her that feels wholly refreshing. Even in 2013, when you and everyone you know has three Apple devices on your person, linked to the Internet at all times, it's remarkably easy to look down on technology and the people who use it. In the hands of another filmmaker, or in another era, a relationship like the one between Theodore and Samantha would be denigrated and roundly mocked simply for being different. That is Her's final trick, I think: The love between two people is something to treasure, to revel in, regardless of who they are or how much RAM it takes to keep them running. Gay, straight, Mac, PC -- it's all the same in the grand scheme of things.

MINORITY REPORT: Don't tell Donovan, but we can communicate through the time-o-gram whenever we like, we just choose not to because he's such a downer. Always moaning about the death of humanity and the fall of civilisation. Yeah? Well some of us have to work late on Saturdays so have a little perspective. - Ian "Professor Clumsy" Maddison