EXPECTATIONS: I don't actually know that much about this film, and quite frankly I don't need to. My ticket was purchased out of sheer curiosity as soon as I learned that somebody decided to put Andrew Dice Clay in a feature film in the Year of Our Lord 2013. The fact that the "somebody" in question was Woody Allen is just the icing on the baffling cake. Woody Allen is directing a film with Andrew Dice Clay and Louis CK. Sure. Fine. You have my attention, Mr. Allen.

REALITY: When people talk about Woody Allen, they tend to ignore that one of his main talents is garnering audience sympathy for characters that in no way deserve it. This is likely because the person he begs the hardest to gather your unearned compassion for is Woody Allen. However, what this means is that we spend a whole film trying to fight the inevitable connection for characters we have no reason to root for, only to have nothing done with it. The whole thing just feels very cruel.

Such is the case with the tale of Jasmine (Cate Blanchett), a former millionaire who moves to San Francisco to stay with her working-class adopted sister Ginger (Sally Hawkins) after the arrest and subsequent suicide of her scam-artist businessman husband Hal (Alec Baldwin). Having lost her fortune and all that she ever knew, Blanche Dubois- sorry, I mean Jasmine, attempts to enter the workforce and make something of herself, but her delusions of grandeur and obvious alcoholism prevent that from happening, like we all knew it would in the first place. The Stanley Kowalski role here is then split between the three men in Sally's life: Her former husband Augie (Andrew Dice Clay), who hates Jasmine and Hal for stealing his life savings, her current boyfriend Chili (Bobby Cannavale), who hates Jasmine for stealing Ginger's attention, and her quickie fling Al (Louis CK), who never actually interacts with Jasmine and honestly didn't need to be in the film at all, but exists because Louis CK's natural likability is exactly what the film needs to keep us from following in Hal's footsteps. 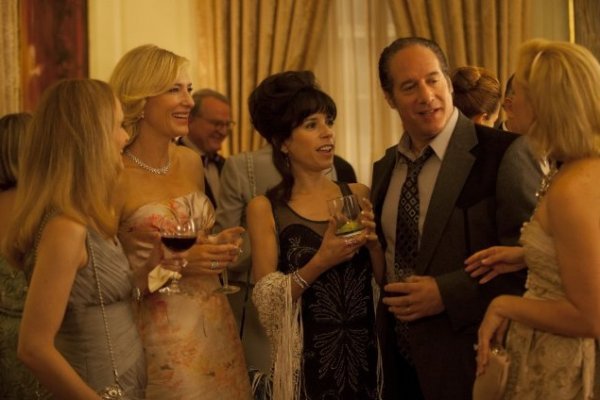 Live it up while you can, Diceman...


Yes, this film is incredibly dark, and with reason. It's the cautionary tale of a woman who has never been asked or required to think for herself, or to work for anything ever. When the world no longer pampers and provides for her and requires her to become an actual person of substance, she responds by going literally insane. Blanchett sells this role, staring into space while reciting memorized anecdotes and recalled rants silently to herself with obviously affected accents. The tragedy of Jasmine is pushed even further when she actually attempts to take classes and get a job, where she is pushed away by a lecherous employer. It's left to the audience whether Jasmine's obliviousness is her own fault or the fault of the environment she was in. The answer is probably both, but Allen make it quite clear that Jasmine never really had any interest in being anything but a "kept" woman. This again, is where the unearned sympathy comes in. Almost every problem Jasmine has is caused by her own refusal to behave like a human being, but we still feel bad for her. Further introspection will make you wonder why you do, but there you go.

The issue here is that the film is extremely light on plot and story, coasting mainly on the power of its cast and concepts. This is fine, except that the extreme heaviness of these themes and the lack of places for plot and character development mean that we're watching the same mistakes, the same Sisyphean faux paus over and over again. (Wow, apparently even writing about a Woody Allen film makes you sound a little more pretentious.) That's why the film feels so battering and sloggish even though it clocks in at barely over ninety minutes. The film is draining to watch, without real payoff. Personally, I much prefer whimsical and charming Woody Allen to dark and cynical Woody Allen. There's not enough story here to justify the darkness, and then everything seems just cruel.

If you are going to coast on a cast though, you could do a lot worse than this one. Blanchett is obviously the powerhouse here, but there are strong performances all around. Bobby Cannavale continues to be one of my favorite character actors, and here his Jersey-Shore persona is a veil for Modern Machismo. He knows that he's not high class, and Jasmine's presence makes him feel inadequate and insecure, which manifests itself while he angrily knocks phones off walls and breaks down crying in the middle of a grocery store. (It's a lot more endearing than it sounds.) In fact, he would the most traditionally sympathetic character... If not for The Diceman. That's right, somehow Ford friggin Fairlane puts in the strongest supporting performance in this arguably-feminist film. He only has a select number of scenes, but his bitterness is piercing. Clay's got a clear control of the character, a man who once believed he had every opportunity in the world, whose plans and ideas have been shoved aside by changes in culture he could not have foreseen, until he's left angry and washed-up and... oh, well that makes perfect sense.

MINORITY REPORT: Stop me if you've heard this one before: So Woody Allen, Alec Baldwin and Andrew 'Dice' Clay walk into a bar... -Joseph "Jay Dub" Wade