EXPECTATIONS: In any other boardroom on the planet, "Harrison Ford vs. Gary Oldman, Part II" would be all the pitch you'd need for a greenlight and a summer fast-track. Paranoia, however, managed to find its way to the one pitch meeting where that simply wasn't enough. "Who's the sexy young lead? Who's the love interest? Old people can't relate to other old people who use computers! Throw a hitman or two in there! Technology! Smartphones! Hooray!" And thus, a motion picture was born...

REALITY: The existence of Paranoia defies explanation. Here, we have an espionage thriller about the world's smartest computer engineers and software developers who all seem to have a fundamental misunderstanding of the application and use of the very products they created. The only excuse for the flagrant stupidity in this film is that if computer people actually understood the way their computers worked, there would be no movie.

Adam Cassidy (Liam Hemsworth) is a young tech whiz working for communications magnate Nicholas Wyatt (Gary Oldman). After a night of heavy drinking on the company's dime, Wyatt presents Cassidy with a golden opportunity to pay him back: Wyatt will land Cassidy a top job working for his competitor, Jock Goddard (Harrison Ford), and in return Cassidy delivers him files and intelligence on Goddard's secret tech project. Cassidy falls for Emma (Amber Heard), one of Goddard's top marketing people, and when it becomes clear just how deeply illegal Cassidy's actions are, he attempts to play one off the other in order to get away scot-free. 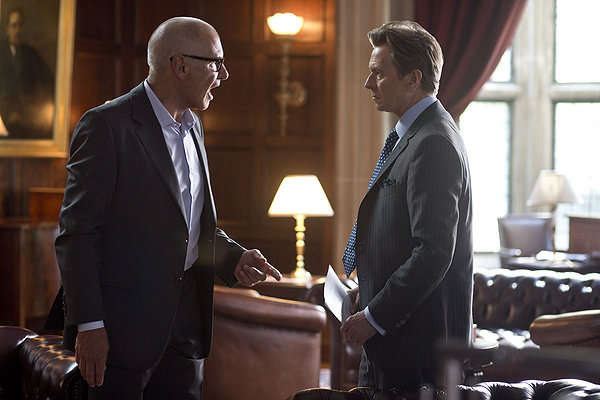 Oh yeah? Well I 'something something' computers, too!


That may sound like I'm giving away the entire movie, but it's really no more than we learn in the trailer (which, incidentally, does give away the entire movie). The real thrill of this movie comes in finding out exactly what secrets Cassidy is being tasked with discovering, and watching with bated breath as he escapes certain death at the hands of Wyatt's hitman (Julian McMahon, one-time Dr. Doom).

The rest of the movie turns out to be exceedingly dull. Two men enter a fancy room and sit down at a table. They talk about technology in broad terms so as not to give away how little they actually know about technology, then they threaten one another over whose technology is better. Then one of them leaves while the other sits and stews about losing the technology-insult fight. Cassidy smirks at someone; everybody has a good laugh about it. Wash, rinse, repeat until bleeding from the eyes.

Even the initial draw of Gary Oldman and Harrison Ford as rival tech tycoons isn't enough to save this sinking ship. The two share a small fraction of the film's running time together, and when they do, things almost start working. Ford exudes his trademark grumpy old man rage, while Oldman goes to town with his best Brick Top impression, but when all of the talk revolves around smartphones and GPS surveillance, things sure get old in a hurry.

For a brief moment, Paranoia tries to make a bold statement about today's digital culture in which everyone's personal information can be accessed by anyone. Goddard's secret device is a wallet-shaped bracelet that contains everything anyone in the world would ever want to know about you. He says the genius of this device is that people are too distracted these days to even realize they've just given away their personal information to the world's largest companies. I would laugh at how stupid that idea is if it weren't already a thing being rolled out for guests at Walt Disney World. 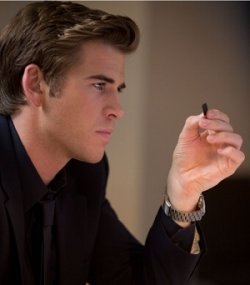 This does something. I'm sure of it.Less disappointing than the Ford/Oldman showdown, but still pretty high on the list, is Paranoia's almost complete lack of action. They call them "action thrillers" for a reason. (Or am I the only one who calls them that anymore?) For an action thriller to be missing half of that equation is kind of a big deal. It means there's suspense, but without any sort of cathartic blast of energy to pay it off. There's one scene in which Cassidy runs from Wyatt's bodyguard in a sparsely populated borough of New York, but for the most part the "action" is relegated to things like frantically waiting for a file to download, or hoping Cassidy's nerd friend (Lucas Till) can find a way around a cell phone being turned off. If it's thrilling heroics and derring-do you're after, you'd be better off trying to get a movie theater cop to chase you around the parking lot.

In the age of smartphones and Wikipedia, I never thought I'd see the day when computer hacking and espionage would seem boring. Paranoia completely fails at generating tension or delivering thrills, and the only genuine laughs the film gets come courtesy of Richard Dreyfuss, who plays Cassidy's ailing father. In his five minutes of screen time, he injects more warmth and humanity into the film than it deserves. That the film wastes so many of the great actors at its disposal, while focusing entirely too much on the one actor whose only emotions are 'smirking' and 'wide-eyed terror', is a crime of cinema.