EXPECTATIONS: "From above the world of Disney's Cars," states the unimaginative tagline to Disney's Planes, their latest entry into the monstrously anthropomorphised vehicles canon. Why do these vehicles exist? Who built them? Why do they even have crop dusters? Do they eat? What happened to all the people? How does a film this ugly even get released? Who even likes Dane Cook? All these questions and more come immediately to mind every time I am invited to put my head through a Planes standee and pretend my face is an aeroplane cockpit.

REALITY: Children's entertainment has a long and noble history of anthropomorphising inanimate objects. It's an easy way to condition them toward two things: societal compliance and poetic thinking. When a dish can run away with a spoon, anything is possible, so long as we continue to live in a world where dishes and spoons exist. Bravery can be applied to a little toaster to teach our children that they should stand tall and be bold, so long as that boldness doesn't go so far as to say "Hey, let's not do any of this any more." How does this apply to Planes? Well, sometimes it's important to teach your children that societal constructs, such as the objectification of women and the natural inferiority of non-whites and non-Americans, are absolutely A-okay! 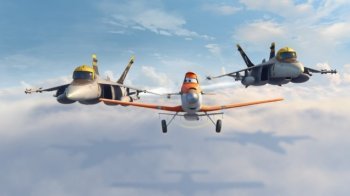 Dirt road to the... DANGER ZONE!

Dusty Crophopper (Dane Cook) is a sentient crop duster who dreams of being a racing plane. Okay, read that last sentence back to me. Yes, that sounds like the ravings of a madman. Okay, where were we? Dusty gets some training from a grounded Navy plane called Skipper (Stacy Keach), who is now a flight instructor (for sentient planes), and enters a worldwide plane racing championship, which he is improbably capable of winning. Oh, this sounds familiar to you? That's because it's the same plot as Turbo, but with aeroplanes instead of snails.

Cast your mind back a little way and you'll recall Joe hoping that Turbo would be secretly racist, just so he'd have something to talk about. Well, be careful what you wish for, Mr. Wade, because that's exactly what Planes is. This is a film that seems to have been designed with the sole purpose of putting me in a bad mood. It's political themes are offensive, its basic premise is terrifying given any scrutinisation and the whole thing is ultimately depressing and enraging. It certainly may make for an interesting conversation starter amongst film critic circles, but is it really something you want your children watching?

Let's begin in earnest by discussing the actual world of the planes, these terrifying homunculi exist on the planet Earth, the exact same planet upon which we currently live. They move around independently of human pilots and yet they continue to perform whatever task it is that they were designed for. They intake fuel directly to their tanks and yet they also ingest it orally, presumably into some stomach. Their mouths have teeth and tongues. In one scene, two planes visit the Taj Mahal, now overrun by sentient vehicles. Cars drive along its walls, taking in the sights for themselves, no longer restricted to the act of transiting their human owners to tourist destinations and then sleeping silently in the car park until it is time to leave. 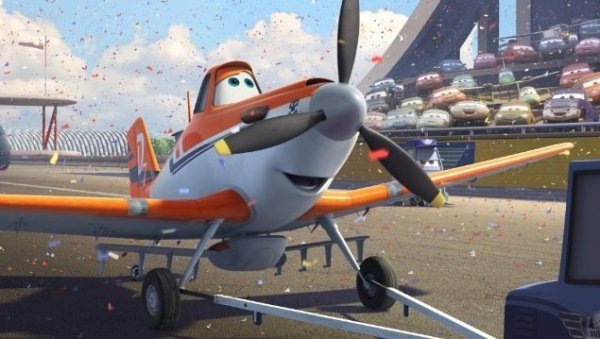 Which cars make confetti in this universe? And out of what?!

The planes themselves somehow remained in their service roles, fit only for carrying out the tasks for which they are designed. Dusty, for example, is a crop duster whose crops are presumably harvested to make some kind of fuel. Plant life thrives in abundance, but not one living animal remains. I think it's pretty clear what happened here: we humans, in our infinite wisdom, have built this world for our own future generations, then we somehow gave sentience to our vehicles and they ate us all. That's the only backstory I can glean from what is implied. The cars are free without their human masters, the planes are restricted to their specific jobs and schedules and the fork-lift trucks are essentially the slaves, living only to appease their new masters.

In spite of the lack of humans, there still exist many human ideas and constructs in the new Earth. Obviously this class-division is only the beginning. The planes have managed to take on all the most stereotypical traits of their respective nationalities. Why do they have nationalities? Wouldn't sentient flying machines live in a world without borders? Dusty meets a menagerie of various stereotypes, chiefly a Mexican who wears a cape and mask and sings with a mariachi band. The Mexican plane, who we will refer to only as the Mexican plane for he has no identity beyond that, falls in love with a French Canadian ladyplane. Why do planes have gender? I have no idea, they presumably do not reproduce sexually. In fact, they don't seem to reproduce at all, they could well be the last and only of their kind, with no knowledge of how to make more planes. Dusty's dream of freedom is not just that of the average middle-class, stuck-in-a-rut Joe Everybody, but the death cry of an entire planet. Are you having fun yet, kids? 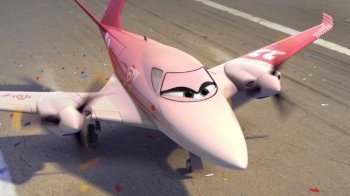 I'd like to get some frequent flyer miles on that plane, if you know what I mean.The female planes are apparently designed by someone who has no idea what a female plane would look like. The idea of introducing gendered identities to normally non-gendered objects so often treats the familiar as inherently masculine. Female planes are painted hot pink and granted the enlarged, fluttery eyelashes so often used to distinguish women from men in lazily drawn cartoons. "Look at that propellor," declares Dusty and he gets a look at one of the ladyplanes' rear end. In one scene, the film even eroticises the tilting of wingflaps for a disturbingly long time. You could argue that it is a joke. I would argue that it enforces the idea of objectifying women to all the five-year-old boys in the audience by applying it to literal objects who have gender but no sex. Gotta start them off early, after all.

In a film so concerned with class division, racial stereotypes and gender-inequality, it seems odd that the heavy-handed "moral" of the story would be that Dusty's success is an inspiration to all the little guys who were designed to be less but who can learn to try to become more somehow. It's like the persistent right-wing (ha) argument that minorities already have equality and that by insisting that they do not, these groups are merely seeking to gain an upper hand. The belief is that these people are naturally unequal and can only be considered equal in legal terms, because the truth as they see it is that anyone who is not society's favourite is only in a marginalised position because they can never aspire to truly be more than they are allowed to be.

MINORITY REPORT: The backstory you describe is a scenario more terrifying, more revolting, and more unknowably horrible than any Lovecraft story I've ever read. This is the film I've been dreading we'd see all year, and I have to pat you on the back for taking it like a champ. Welcome to the club, Professor. - Joseph "Jay Dub" Wade