EXPECTATIONS: Reese Witherspoon is cruising for Oscars this year, and The Good Lie is her first of three separate passes. That's probably the wrong way to look at it, though. The film is based on the story of the Lost Boys of Sudan, children forced out of their country by long-raging civil wars. That puts it in roughly the same recent history ballpark as Machine Gun Preacher, though I don't really expect Reese Witherspoon to show up out of nowhere with guns blazing. Not gonna lie, though, that'd be fun as hell.

REALITY: Conceptually, The Good Lie is more or less unimpeachable. You certainly can't fault Ron Howard and Brian Glazer for wanting to produce this story, or writer Margaret Nagle and director Philippe Falardeau for attempting to tell it. Where the film ultimately falls flat is in its execution, which threatens to turn The Good Lie's honest humanitarian intentions into an amazingly thin piece of cultural tourism. 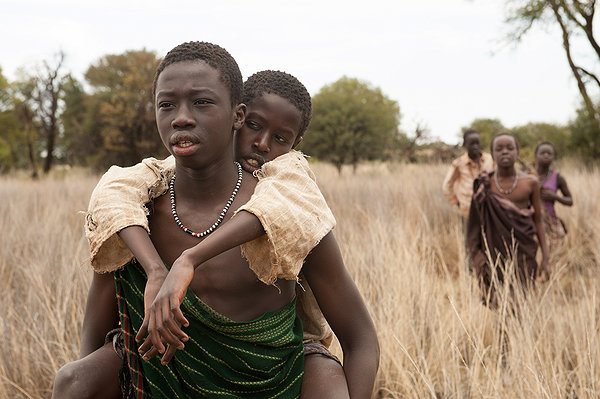 "But there are five kids in this picture." Yes. Yes, there are.

The film follows four Sudanese children as they flee the rampant violence in their country. The first half hour sees these kids escape murderous soldiers that shoot anything with a pulse, walking nearly 600 miles through sweltering heat and ravenous wildlife before happening across a refugee camp in Kenya. After surviving in the camp for thirteen years, Mamere (Arnold Oceng), Abital (Kuoth Wiel), Jeremiah (Ger Duany), and Paul (Emmanuel Jal) are selected by faith-based charities for immigration to the United States. While Abital is shipped off to unknown horrors that await her in Boston, her three brothers are sent to the sparkling metropolis of Kansas City. There, they meet employment agent Carrie (Reese Witherspoon), who finds it a complete and utter headache helping them adapt to their new surroundings.

From here, the film becomes a limp fish-out-of-water comedy akin to Million Dollar Arm, as Carrie throws her new clients headfirst into a culture they hardly understand. They stare in utter confusion at a ringing telephone, and she explains it to them like a snot-nosed teen trying to explain to her dad how Kik works. It's played for laughs, but it comes off more mean-spirited than anything else. They've never seen a McDonald's before, Carrie. Pointing at the golden arches and saying, "It's McDonald's," is the opposite of helpful. It says a lot about Carrie that she at one point needs a whole bottle of tequila to help her make the effort of helping someone else. Reese Witherspoon is fine in the role, but she's stuck with such a thankless, one-note character that it's kind of a relief when she disappears for whole chunks of the film. 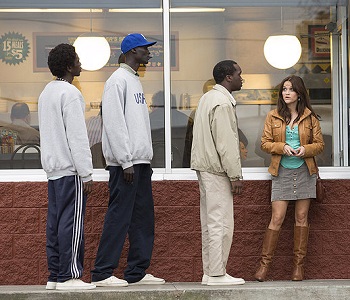 "I'll be honest, you guys... I'm terrible at my job."At first, I thought this was a mistake, like the film got so wrapped up in its honest portrayal of African refugees that it just plain forgot to write Americans like real people. But as the film rolled on and nobody's attitude seemed to change, I realized this had to be intentional. The Americans in The Good Lie live such a completely insular existence that even the thought of helping an outsider assimilate just plain does not compute. Carrie never thinks to explain that these are refugees from Africa and not simply out-of-work locals, so no one ever bothers to ask. The only person with an inkling of what these four have gone through is Jack (Corey Stoll), a friend of Carrie's who is himself a war veteran. He can at least relate to Mamere, who is intensely troubled by the horrors he experienced as a child. For that reason, it seems like a job on Jack's cattle farm might be just the answer they're looking for.

Not so, as it turns out. Jack provides Mamere with some impromptu grief counselling, but otherwise has zero role to play in the actual story. Even after establishing how taken the three brothers are with Jack's cattle, it never occurs to anyone that this place might be a good fit for them. The film is full of moments like this, where an obvious solution to a simple problem is right in front of everyone's faces, even taking long pauses before moving onto the next one. It kind of plays like Blue's Clues for old people, waiting for the audience to shout out the morally appropriate solution. I wouldn't have even made that reference if the old lady in front of me hadn't done exactly that.

"Can you see an opportunity here?" Give them a job!

"What about here? Anything?" Let him give food to the homeless lady!

"How about now, folks?" Stop treating everyone like a potential terrorist!

Of course, that's all easier said than done. Businesses aren't quite so willing to just hand out jobs or give away unbought food, and the idea of not doing the right thing because of laws and reasons shines a light on how dumb and broken our system sometimes is. Mamere is eventually forced to think outside the box in order to help his family. This is where the title of the film comes into play. "The Good Lie" refers to Huckleberry Finn, who lies about his relationship to Jim in order to do right by the both of them. The film waits until its final act to reveal this, ultimately implying that "fake it til you make it" is complete bullshit unless it's coming from Mark Twain.