EXPECTATIONS: I asked for a ticket for the movie where the girl went missing. Instead, I got the one where they ALL go missing.

REALITY: Jesus would hate this movie.

Chloe Steele (Kristin Bell-dopplegänger Cassi Thomson) has just completed her freshman year philosophy class, evidenced by the fact that she picks a fight with a woman talking to reporter Buck Williams (Chad Michael Murray) about Jesus in an airport. Her mother Irene (Lea Thompson) wants her and her cheating jerkoff pilot husband Rayford Steele (Nicolas Cage) to be prepared for the End of the World. Rayford is busy piloting a jet to London, where he hopes to seduce Stewardess Hattie (Nicky Whelan) after a U2 concert, and gets stuck in the air when passengers start to vanish and the whole world turns to fire and looting. 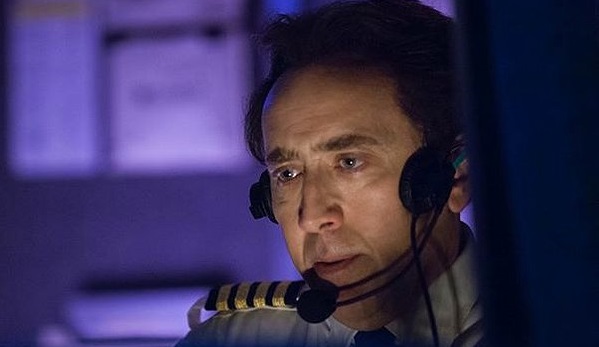 
Every opportunity for a genuinely moving or terrifying moment is squandered with poor editing. As Chloe is racing home, trying to find her Raptured brother/info-dump machine (Major Dodson), she sees an unmanned school bus topple over a bridge. It's a visual that should twist at the deepest part of our core, but as soon as it starts, the film cuts back to Rayford staring out just past the camera and looking mildly depressed, like he'd just found out that they were out of hazelnut creamer at craft services. By the time we get back to crushed bus, we've more or less forgotten about it.

I, for one, was genuinely happy to see sweet Irene ascend into Heaven. Everyone was an asshole to her about her faith, like it was a huge burden on them that someone had different beliefs than they did, but the way she preached it was much the way your own mother tells you to buckle up or put on a sweater when it's cold. She was concerned, and she was right - so maybe Chloe wasn't saved because she didn't get right with The G-Man, maybe she wasn't saved because she was a rotten little bitch whose seemingly sole existence is to shit on what other people do with their lives. I'd hate to see what happened if she ever came across a Brony, or someone who didn't think Taylor Swift was, like, totes deep.

The majority of Left Behind focuses on a group of first-class passengers and their sad, wealthy lives, lending the film a slight Atlas Shrugged vibe. None of their names are ever given, though, and they're given pretty generic traits - a pretty drug addict, a wealthy businessman, a mean short guy - to distinguish them. I kept hoping the movie would force them to confront and confess their sins (I really wanted to know what they old lady did that kept her from getting Raptured with her husband) but no such luck. They're just chess pieces being moved into place for a sequel that will probably never get made. 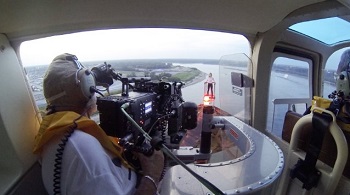 This is your motivation: We're taking this helicopter and leaving you here.

Left Behind half-asses everything except its utter nothingness. It's a Christian film by a Christian studio based on a best-selling Christian book series, and although "God" and "prayer" are mentioned, the name Jesus Christ never crosses a character's lips. I'm not a Biblical scholar by any means, but I'm pretty sure Jesus is a pretty big part of Christianity. So why hedge your bets? Are you worried that Chloe is going to jump out if the audience and start hitting you with her Vera Bradley purse while screeching about earthquakes? Hell, you couldn't go five minutes in The Identical without hearing The J-Man mentioned, and that was little more than a shitty faux-Elvis movie.

So then, what is the purpose of Left Behind? It's not an entertaining action-thriller designed to appeal to a mass audience. It's not a film that probes deep in the questions of sin and salvation and how we approach faith. It's just a live-action picture book with no real thought given to what a movie should actually consist of, like plot or character development or dialogue that moves the story ahead rather than smashing it repeatedly into a wall.

MINORITY REPORT: They didn't need to say the name of Jesus Christ in the movie because our Lord and Savior was already there, playing a handsome airline pilot. -Martin R. "Vargo" Schneider