EXPECTATIONS: I'd be more excited for this if it were actually an official entry in the new James Wan horror canon (Wan-on?). Instead, this is clearly a studio-demanded offshoot from a director who also brought us renowned masterworks of crap like Mortal Kombat: Annihilation and The Butterfly Effect 2. (Yes, there WAS a Butterfly Effect 2! No, seriously!) Part of the reason horror films are made so often is that they usually make ridiculous amounts of money off of extremely limited budgets. So between this guy, and a writer whose only other noteworthy credit is a direct-to-video film titled BloodMonkey, I'm guessing the goal was to make Annabelle for roughly the cost of a certified pre-owned Volkswagen Jetta.

REALITY: To be a little more fair to director John Leonetti, he also served as the director of photography who helped make The Conjuring and the Insidious films so good. Unfortunately, as we saw earlier this year with Transcendence, that's not enough to make a cohesive film. As a director, Leonetti's calling card is "cheap knockoff," and here he's called in to ape James Wan's original style in The Conjuring, which was itself an homage to vintage horror aesthetics. So it's an imitation of something whose entire schtick was looking like it came from the 1970s. Watching Annabelle is essentially like paying to see a Kings of Leon tribute band. 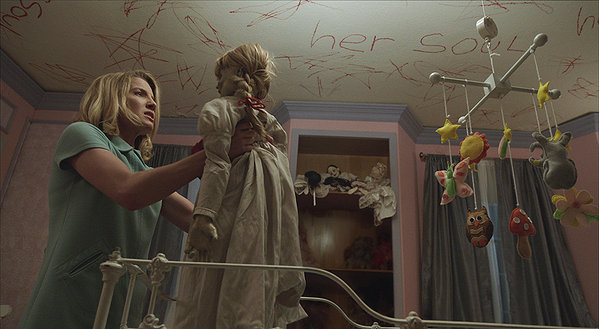 "Yeah, and I'll bet the word gullible is up there too..."

Taking place several years before the events of The Conjuring, and keeping discussion of Ed and Lorraine Warren to a minimum, Annabelle follows John (Ward Horton) and Mia (Annabelle Wallis), a young expectant couple who move into an apartment building after surviving a home invasion from a ritualistic cult which is Totally Not The Manson Family, although those murders are referenced directly. (Look, I know Roman Polanski is a rapist asshole and all, but it's still pretty tacky to shoehorn in his wife's murder while simultaneously ripping off his movie.) After the birth of the child, Mia begins seeing things and having demonic and ghost-like experiences. She determines that these oddities are linked to a creepy ceramic doll John bought for her that a demon has attached itself to and blah blah blah you have seen this movie before.

Annabelle does succeed in its recreation of the unsettling feelings that the rest of the Wan-on caused in their audiences. Leonetti's cinematography and composer Joseph Bishara's score are a huge part of the reason why those films worked, and here they work together again, with Leonetti's unusual hard camera angles matching with Bishara's piercing staccato. It's because of this attention to atmosphere that the scares in Annabelle work as well as they do. A lot of work goes to building tension from ordinary sounds (or the lack thereof), and the sound shifts and editing in the film are top-notch. Although the pacing is unusual, with a great amount of buildup before the doll or the haunting even become major factors, the handful of actual demonic-intervention scenes do provide fun and effective scare moments.

While the look and feel of the film are solid, most of the problems stem from the film's screenplay, a Rosemary's Baby reference run through a James Wan filter. The lack of originality doesn't mean that this film is necessarily ineffective, mind you, just that it's unsurprising and predictable. Horton and Wallis give nothing-special performances from nothing-to-work-with material, and from the moment our expository character arrives, the film's resolution become painfully obvious. Because of the half-assed nature of this story, I wouldn't be surprised to learn that this was a completely unrelated script which had been retrofitted to squeeze in the requisite creepy doll. Despite what Seth McFarlane may believe, a script cannot work on references and homage alone. Annabelle's biggest failing is that it steadfastly refuses to play with or build upon the far superior works it is trying to impersonate.

MINORITY REPORT: Where does one buy a haunted doll? Asking for a friend who has a bunch of baby showers she doesn't want to go to. -Libby "Gentleman Loser" Cudmore