EXPECTATIONS: Have you ever actually seen someone on their 21st birthday bar-crawl, around midnight or so? It is one of the saddest, most pitiful things you can ever imagine. No matter how much drinking you did in high school, bar-drinking is a different beast entirely. Letting them go off like that is like throwing a four-year old into a wading pool filled with candy, complete with a similar amount of crying, vomiting, peeing themselves, and pathetic attempts to convince themselves they're having fun. I feel that this is probably a strictly American phenomenon, because no other civilized country that I'm aware of makes young people wait as long for bar booze as we do.


In any case, I have a bit of a soft spot for intoxicant-fueled misadventure comedies like Harold and Kumar and Dude, Where's my Car? Given that this film comes from Hangover creators Jon Lucas and Scott Moore, who are not afraid to explore the darker side of drinking, I'm hoping this film doesn't shy away from showing the sheer sadness involved in this bizarre ritual. Yes, folks, this is what I want in my drinking films: Melancholy existentialism. I am just a blast at parties. 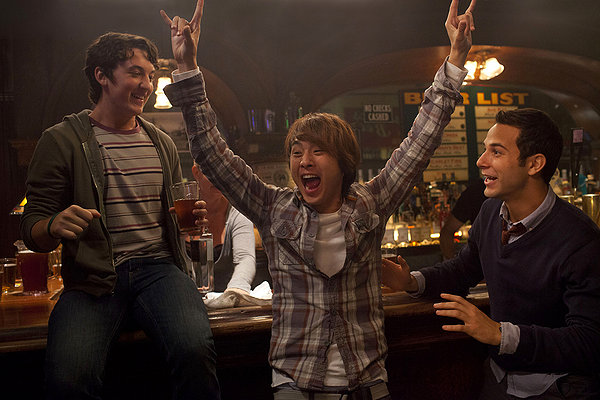 
REALITY: As obliquely referenced in the Jack The Giant Slayer review on the previous page, the dramatic principle of Chekov's Gun states that if a play/movie introduces a gun into the story in the first act, that gun had better be fired by the third act. The dramatic principle of R-Rated Comedies states that if a film is set anywhere near a college campus, you will see approximately five seconds of boobs that will have absolutely no bearing on the story. It makes me happy to know that the founding principles of art are still being observed.

I've often said that the reason that the first Hangover film is so good is that at its core, the script is actually a pretty decent find-the-clues mystery story. That surprising intellectual component sets The Hangover apart from similar films that do not understand their own points (including its own sequel). Now that the writers are in charge of their own movie, and don't have to force their ideas through the DudeBroDude filter of director Todd Phillips, they've chosen to stick to many of the same concepts, but they've also made the bold decision of having the perpetrators of the drunken shenanigans be the actual socially acceptable age to do it. This eliminates the "midlife crisis/re-capture the youth" motif of the Hangover films, but that was the worst part of those movies anyway. 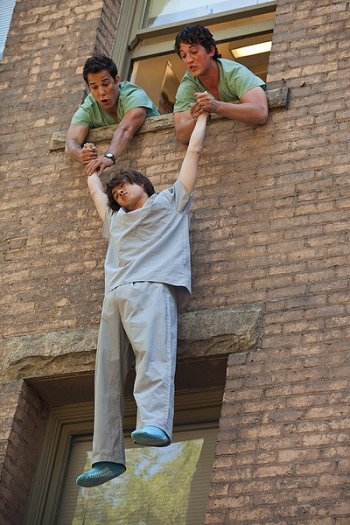 I think this officially qualifies as one hijink.

21 and Over follows former high school friends Casey (Skyler Astin) and Miller (Miles Teller) as they reunite during their final year of college on the occasion of their friend JeffChang's (Justin Chon) hallowed 21st birthday. Their plans to take JeffChang out for a night of drinking are almost thwarted by his Stereotypical Asian Father (François Chau), who needs JeffChang dressed and ready at 7:00 AM for his Big Med School Interview. Of course, the boys go out, JeffChang goes through his intoxication montage (giving me the pitiful sadness I asked for!) and as Casey and Miller attempt to be responsible and get the passed-out JeffChang home, they come to the conclusion that they have no idea where he lives.

As the boys attempt to discover JeffChang's address, they uncover secrets of their friend's life, discovering that JeffChang is kind of a loner with an attempted-murder arrest on his record. Like I said, it doesn't deviate too much from the Hangover formula, but goes beyond this to touch on some pretty heavy concepts, including college suicides and that rift in friendships that happens after high school, along with our societal guilt making us pretend these rifts don't happen. Also, a bunch of dudes get gored by a buffalo.

I was pleasantly surprised by how much I enjoyed 21 and Over, mainly thanks to the natural and goodnatured banter between Astin and Teller. Miles Teller is one of my favorite young actors, ever since Footloose. He has this uncanny knack for rural dialogue, making lines flow so naturally, even the most awkwardly written ones. Astin's straight-man performance is a perfect balance of shock and flat non-reaction. Speaking of straight men, and awkward segues, let me get my one major complaint with the film out of the way. Not only does the film deal with the "Two girls kissing=hot, two dudes kissing=gross" double standard, it also makes it a major plot point. Now, the scene in question is actually incredibly homoerotic, which made me think it was bordering on satire. Even if it was, though, the target audience means they can't actually make the point they wanted to. Without any real evidence one way or the other, I'm going to assume the worst.

If anything, though, most of the film seems to be mocking frat-boy attitudes, and by extension, Todd Phillips. I don't think it's coincidence that Lucas and Moore chose to traverse into deeper territory with this film. It means that the film where the people acting like drunken college kids are actual drunken college kids is actually the more mature one, and by comparison, the one with men in their thirties with jobs and responsibilities looks incredibly shallow. I'm not knocking The Hangover here; I'm saying that these movies were made by the same people, but one of them also involved a dude whose films, Old School especially, are a celebration of frat-house mentality. Meanwhile, over in this movie, when someone asks Casey why he's not in a fraternity, he answers "Because I'm not angry and secretly gay." I don't know of any actual bad blood between Lucas/Moore and Phillips, but if there is, they're not being subtle about it. And I love that.

MINORITY REPORT: Stolen police cars and buffoonery? Gosh, this sure feels familiar. Blackout drunk is probably the only the way to enjoy this film, I'll bet. - Sean "Keanu Grieves" Hanson