EXPECTATIONS: Is Dwayne "I'm not sure if we're still allowed to call him The Rock" Johnson officially an actor yet? It just feels like he's spent way too long in "actor puberty," where even though he's usually enjoyable, he hasn't quite come into his own enough to be taken seriously at his craft. It's as if no one can really decide what Johnson is supposed to be. At first it looked like he was trying the Schwarzenegger approach to film in fast-forward, skyrocketing past the action-franchise phase right into the family-friendly kid's movie phase. This is a real shame, because Johnson has more screen presence than Schwarzenegger ever did.

Yes, Dwayne Johnson is a big charming guy, but I know he's capable of being more than a "big charming guy," though he's seldom given the chance. Now that Johnson seems to be going for this year's Bryan-Cranston-Award-for-Being-In-Every-Movie-Ever, maybe this will finally be the time in Dwayne Johnson's 10-year acting career when we can think of Dwayne Johnson as an actor.

REALITY: Sometimes while writing commentary, critics will use the phrase "Oh, the movie's awful, but ____ is great in it!" It's a useful phrase that can be strategically bandied about to safeguard a reviewer against accusations of being contrarian or excessively negative. The problem is that with a film like Snitch, the central performance is literally the only thing worth mentioning. 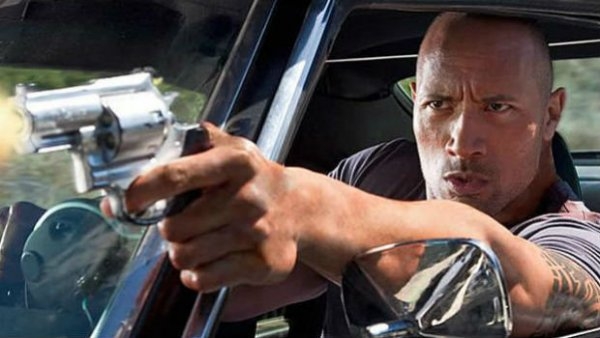 Oh, come on. Shooting guns and driving cars at the same time is like day one of acting school.


When young Jason Collins (Rafi Gavron) gets caught by Federal agents with a whole buttload of Ecstasy, he's sentenced to ten years in prison, thanks to mandatory minimum drug laws. Because Jason is unable and unwilling to set anyone else up, his father, construction company owner John Matthews (Johnson), makes a deal with a US Attorney/Congressional candidate (Susan Sarandon) and the DEA (Barry Pepper) to shorten Jason's sentence in exchange for John's help in gaining large-scale drug busts. With the help of his employee Daniel (John Bernthal), a former dealer trying to get his life back, John goes undercover as a drug transporter for mid-range dealers.


Fans expecting to see Johnson to go through and beat everyone's ass are going to be sorely disappointed. In fact there's only one "fight" scene, and it consists of Johnson getting beat up. This is a major "John Wayne falling off the horse" moment. Snitch plays on the fact that its star is basically built like a Paul Dini-drawn superhero, and that's why the best scenes are the ones where Johnson has to bring the humanity. It doesn't take much to make a giant look invincible, but it takes a lot to make him look helpless, and that's what Johnson does.

As John watches his son's condition grow worse and worse through visitor windows, Johnson gets a real chance to stretch as an actor. These are the highlights of the film, and unfortunately no other part ever gets a chance to live up to these moments. This is particularly interesting because director Ric Roman Waugh spent twenty years as a stunt coordinator, yet the best parts of his film are the ones where two people are sitting and talking through phones. (Okay, there's a semi-truck crash that's pretty cool too.)

The film goes out of its way to tell us how unfair American minimum mandatory non-violent sentences are, then proceeds to introduce us to a bunch of violent drug dealers and users who definitely should be in prison for a long time. It also explicitly details all the ways to get around these laws. Other than the fact that it doesn't really understanding its own message, I have no real complaints with this film. I don't have much to praise it for, either. But hey, Johnson's great in it!


MINORITY REPORT: Dwayne Johnson matured into a fully fledged actor during Faster, where he played an unnamed spirit of vengeance out to do bad things to bad people. He gave that role - and that entire film - a gravitas it wouldn't have had with someone like Jason Statham in the lead. - Ian "Professor Clumsy" Maddison