EXPECTATIONS: Someday, The Last Exorcism, which was better received by critics than audiences upon release in 2010, will get its due as a masterpiece of a genre that's frequently underrated and misunderstood. Filmmakers often abuse the formal elements of found-footage horror, using them as an engine for cheaply made jump scares. The Last Exorcism, however, was going for something deeper. It's simultaneously an exposé of faith-healer theatricality, a psychological thriller about the effects of sexual abuse and zealous parents, and a horror film that may or may not be about demonic possession.

The trailer for The Last Exorcism Part II is somewhat promising, a highlight reel of scary images -- even if director/co-writer/editor Ed Gass-Donnelly, taking the reins from Daniel Stamm, seems to have ditched the found footage elements. Oh well. Here's hoping for the best. 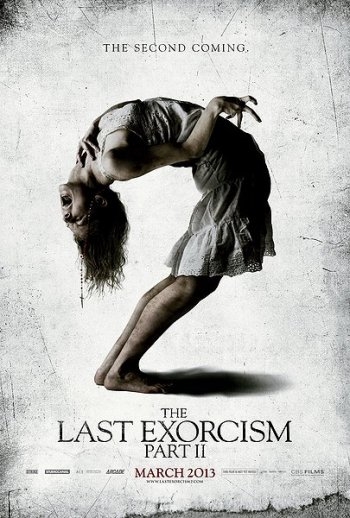 The movie is irredeemable so here's the famous poster everybody seems to love.

It's telling that Nell Sweetzer (Ashley Bell) and Louis Sweetzer (Louis Herthum) are the only two characters to return for The Last Exorcism Part II, and Herthum's contribution amounts to an extended cameo. The Last Exorcism Part II appears to be a direct sequel -- after a "last week on..."-style recap of its predecessor, we catch up with Nell in the hospital -- but it's all so rushed, there's neither immediacy nor a sense of continuation.

By abandoning the found-footage format this time around, because that worked soooo well in Book of Shadows: Blair Witch 2 and [REC]³: Genesis, Gass-Donnelly finalizes the disconnect between The Last Exorcism and a sequel that's a sequel in name and characters only. Gass-Donnelly also abandons the clever writing, the Southern-fried atmosphere of rural isolation and the sense of Louisiana's pluralism. As The Last Exorcism Part II speeds through its first act, Nell is released from the hospital into a halfway house for wayward teens, where she cottons on with Gwen (Julia Garner), who, in a grand gesture of friendship, allows Nell to sit next to her and share earbuds while they listen to generic nu-metal and smile awkwardly.

Bear in mind, people aren't born with an appreciation for generic nu-metal. That's a love cultivated over a decade of sitting in Walmart parking lots and snorting OxyContin with uninsured Todds and Steves in battered mid-'90s hatchbacks. That's the kind of music that gets you pumped for a graveyard shift in housewares. But as it was revealed in the first film, Nell was raised in a vaguely incestuous bubble by her overprotective father miles away from nowhere. Piping generic nu-metal into her country ears should provoke a cry of protest or a burning desire to sprint to the nearest Walmart, not a dull smile, but it does and, in that moment, Gass-Donnelly and his co-writer, Damien Chazelle, reveal how little they know about character development, continuity and basic logic.

I'm not usually a stickler for logic when it comes to horror, but as The Last Exorcism Part II cycles through clichés while never getting around to explaining how Nell recovered from the extensive physical damage she suffered by the end of The Last Exorcism, the questions start piling up: Why doesn't her psychologist (Muse Watson) spend much time talking to Nell about the traumas she has endured? Why does Nell get soppy over the first boy she meets (Spencer Treat Clark) after an adolescence of systematic rape at the hands of her rural community? Why is some tourist the only guy in New Orleans with a cell phone? Why do the continuity errors number well into double digits?


Gass-Donnelly and Chazelle want the horror to emanate from the possibility that Abalam, the demon who possessed Nell in The Last Exorcism, has returned and also from the threat the previous cult poses to Nell as she goes about rebuilding her life. What they don't understand is the horror emanates from Nell's adolescence of rape and false imprisonment. They don't have to add further plot to the already-horrific situation, but they do, and it's muddled, and they punctuate the narrative beats with a never-ending stream of false jump scares. And what are we left with? A horror film that goes everywhere but where we want it to -- into the reaches of Nell's shattered psyche.

In the absence of any meaningful relationships and with only brief glimpses into Nell's past, we're kept a mile's distance from a protagonist who's in every scene. When The Last Exorcism Part II finally asks us to care about Nell's fate, it's next to impossible because we still don't fucking know her. It's an appalling oversight, magnified by the contrasts any fan of The Last Exorcism could draw between that film and its sequel. Most of the tension in The Last Exorcism stemmed from the conflicts between religious belief and religious ceremony, the search for rational explanations for irrational behavior, our concern for the fragile victim of a great number of abuses -- and the further abuses Nell's father might inflict should the documentary crew leave the Sweetzer farm.

The Last Exorcism Part II is all about punishing a victim (in a safe-for-the-Friday-night-crowd PG-13 manner) for trying to start anew instead of exploring why such victims are stuck in spirals that lead only to their pasts. Exemplifying the worst in Hollywood horror, this film treats the past only as a breeding ground for malevolent ghosts and stock characters screenwriters Gass-Donnelly and Chazelle are too lazy and/or stupid to develop. There are a couple neat ideas and a few striking images kicking around the dim spaces of The Last Exorcism Part II, but they too remain undeveloped, ensuring this film remains a prison for elements that deserve better films.

MINORITY REPORT: I was kinda just hoping that The Last Exorcism Part II would just be an extra fifteen minutes to the end of The Last Exorcism that makes that movie's ending not suck. - Martin R. "Vargo" Schneider