EXPECTATIONS: I have high hopes for this one. The trailers make it look like a very interesting take on the special-and-unique-teenager fad that we're seeing right now. Instead of magical powers or vampires, though, Stoker promises actual criminal insanity and sexual deviancy. Throw metaphors out the window, why the hell not? 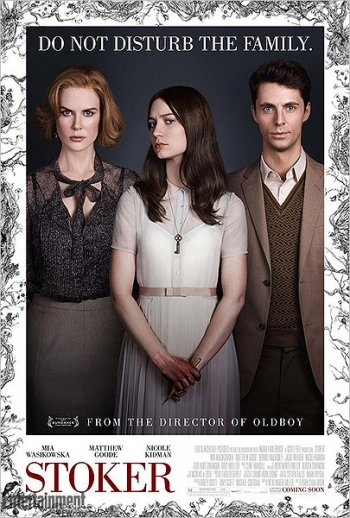 And here's a boring poster that nobody seems to love.

REALITY: Stoker, unfortunately, did not blow me away as I had hoped it would. There's a lot of good cinema to be found in here, but in the end it's like a lesser version of Killer Joe, with a young girl coming out of her adolescence and finding a sexual awakening at the hands of a dangerous sociopath. It's admittedly a lot more watchable than Killer Joe, but Killer Joe never set out to be a pleasant viewing experience -- well, neither does Stoker, particularly. It's a more palatable, less angry take on similar subject matter. Trouble is, if you want to tackle the same subject as Killer Joe, the only way you're going to top that film is to go full-on nasty, sticky, horrible and hateful. Go big or go home, as the saying goes. This just isn't going to cut it.

With Richard Stoker (Dermot Mulroney) dead at the start of the film, his daughter India (Mia Wasikowska) is left with her botox monstrosity of a mother, Evelyn (played by real-life botox monstrosity Nicole Kidman). The pair has never really bonded and finds the situation not to their liking until Richard's brother Charlie (Matthew Goode) shows up and turns everything on its head.

You see, it turns out that Charlie likes murdering people, and he wants India to join him in that endeavour. She's game; she finds the whole thing intriguing and it reminds her of the hunting trips she used to go on with her dad. Unfortunately, with her, the line between violence and sex becomes blurred and everything gets a bit weird and off-putting. It starts as a subtle incestuous desire for her father that she overcomes by killing animals, and becomes an unhealthy sexual desire for her uncle that awakens when she watches him murder a boy who tries to rape her (the would-be rapist is played by Beautiful Creatures' Alden Ehrenreich, an actor worth keeping an eye on).


It's all very grotty and uncomfortable, but is it grotty and uncomfortable enough? Do we watch films like Stoker to enjoy ourselves or to make ourselves feel sick and unliked? There's a certain point at which art needs to pull out all the stops and forsake its audience's enjoyment. Would anyone be talking about Funny Games now if it hadn't done that? Stoker just doesn't quite have the strength of its convictions. 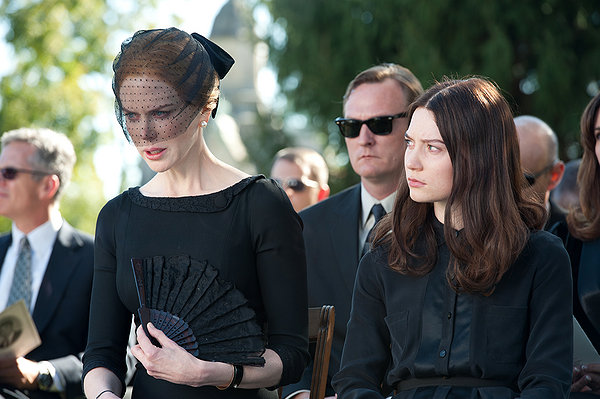 Sorry, I can't stop staring at your botox face. It's like a trainwreck.


There is some stuff in here that is well worth seeing, though. The cast is mostly great. Mia Wasikowska (the lone revelation from Tim Burton's Alice in Wonderland) is brilliant in the lead. It's one of those performances that deserves an Oscar nomination, but it won't get one because the film was released in March and the academy have short memories. Matthew Goode is equally impressive as the murderous uncle with secrets. There's even an appearance from one of my favourite character actors: Ralph Brown. What knocks it down a peg is Nicole Kidman, or this mutant that used to be Nicole Kidman, now a mess of overacting and breathy whispers.

Director Park Chan-wook shoots dialogue scenes the same way John McTiernan shoots action. His camera sweeps around the dinner table as people interject and change their attentions. It's all very dynamic and exciting in a way you wouldn't expect. There's also the liberal use of flashbacks that dip into the Cloud Atlas school of playing with chronology, as though the current scenes and the flashbacks are somehow happening at the same time, which makes for some very impressive cinema. It just doesn't amount to an awful lot. It's a well-crafted film that suffers from its proximity to a similar yet better film.

MINORITY REPORT: How perfect is Nicole Kidman in this? I don't mean she does great work in it - it's passable - but it's like she was cast for the work she's had done on her face. She's so plastic now, it practically screams out at you, and yet here, it feels like a choice. Her character is exactly the type of woman who would console herself with endless nips and tucks and needles. It sells the character in a way her acting could not. - Donald "TheBigBudgetSequel" Hallene III