EXPECTATIONS: As far as talking animals and things that aren't people are concerned, Dr. Seuss has a pretty sterling track record (live-action adaptations notwithstanding), so I'm not too concerned about The Lorax sending me into another week-long depression as so many of these films tend to do. And what better way to take in a family film about conservation than with a giant tub of popcorn and a large soda filled with corn syrup? The Lorax may speak for the trees, but is anybody speaking for the corn?

REALITY: The next time you get into a spirited discussion about what's wrong with Hollywood filmmaking, run over to your nearest movie theater, point at the poster for Dr. Seuss' The Lorax and scream, "This! This is it! This is what's wrong with everything!" The people behind the oddly charming Despicable Me took Dr. Seuss' simple story about the dangers of industrialization, modernized the dialogue, threw in ten more characters than the story needed, and set the whole thing to a bunch of horrifically garish musical numbers. The result is a candy-colored nightmare that says more about the state of Hollywood than I think anyone was intending. 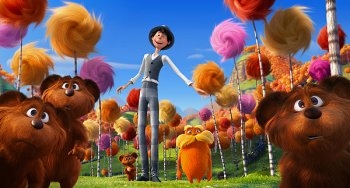 Saving the environment, one IMAX 3-D screen at a time (don't forget to buy popcorn).The Dr. Seuss book "The Lorax" is about a young boy wandering through a smog-filled wasteland who meets the reclusive Once-ler. The Once-ler tells him of The Lorax, a furry little creature who spoke for the trees while The Once-ler cut them all down for his million-dollar invention, the Thneed. The new film by Illumination Entertainment frames that story around the story of Ted (Zac Efron), who sets off to find The Once-ler (Ed Helms), who can help him find one of these mythical trees so he can impress a tree-loving girl named Audrey (Taylor Swift, in a non-singing role, oddly). As The Once-ler tells him the tale of The Lorax (Danny DeVito), Ted is spied upon by an obnoxious little shit of a businessman (Rob Riggle) who looks an awful lot like Edna Mode from The Incredibles.

While I'm not categorically against fleshing out a children's book to fill 90 minutes, if this is the best they could do with The Lorax, maybe it's time we stop adapting Dr. Seuss books. The film absolutely nails Seuss' visual style, and it's honestly one of the most visually lush animated films to hit theaters in a while. Elsewhere, though, Seuss' poetry and eco-conscience are almost entirely jettisoned to make way for a conservation message that's about as subtle as a tack hammer, hidden underneath a thick veneer of wacky antics and egregiously unmemorable songs.

Every film critic who makes fun of The Lorax in rhyming couplets has automatically written more poetry than the writers of the film. What little of Seuss actually survived to the finished film is dumbed down and stripped of any possible weight. "I am the Lorax, I speak for the trees" has been filtered through modern humor into "I am the Lorax, I speak for the trees. So, y'know...yeah." What does this add? Is it supposed to be funny? I guess it is. It's clear that we're not supposed to take the Lorax character at all seriously. They apparently want us to look at the Lorax the way The Once-ler does: as an unfortunate annoyance with a funny accent and nothing important to say. To Danny DeVito, or whoever added that last little "So yeah," to every sentence, I'd like to thank you. Your contribution to the arts is an everlasting one that will sadly be remembered on DVD for years to come. 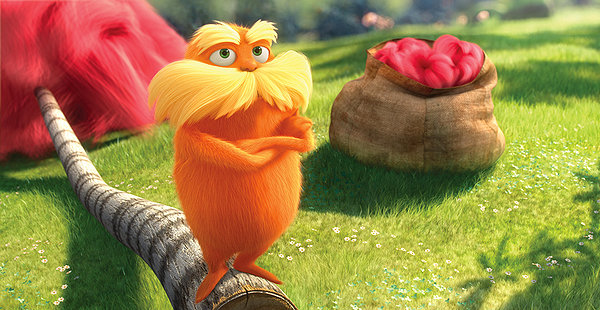 When the film isn't concerned with regaling us of The Once-ler's story, it spirals out of control with a story of espionage and corporate greed made up out of whole cloth just so we can have something resembling a hero/villain dynamic. The subplot of O'Hare Air producing more smog in order to drive up sales of bottled air is not an entirely terrible one; in fact, it parallels the Once-ler's story quite nicely. But while the core story is a succinct parable about why unchecked industry is dangerous, this subplot winds up becoming a Big Brother-esque cartoon about businesses wringing money out of people for buying stupid, stupid products.

And the musical numbers feed into this as well. Each of the film's songs, including the ones featuring Ed Helms doing his best to ape Steve Martin's banjo shtick, is an over-produced, electronic-pop hellscape. These songs seem specifically crafted to move units and rack up iTunes downloads. I want to say these songs are meant to be some kind of a satire of over-produced pop music with nonsense lyrics, but that might be giving them too much credit. "How Bad Can I Be?", The Once-ler's song justifying his business to the Lorax, comes the closest to hitting its mark, but it's drowned in so much gaudy choreography and noise that it's difficult to even follow at times.

Now, you might be sitting there reading this and wondering "What does any of this have to do with Hollywood?" To my eyes, everything about this film feels like a cold, calculated effort to take a children's book about a serious subject and turn it into a big, flashy piece of candy to hide its subject from its target audience, and then make as much money off them as possible. I'm not saying that children need to be confronted with the realities of commercialism and deforestation at the movies, but it would be nice if the film at least approached its own subject matter in a way that didn't treat its audience like a pack of morons. If all they wanted to do was cash in on another Dr. Seuss title, they could have found a simpler way to do it. Children aren't stupid, and I feel like adults that enjoy watching animated films are often pretty smart too.

At the climax of the story, the Once-ler declares that "unless someone like you cares a whole awful lot, nothing is going to get better. It's not." This speaks for the trees, but it also speaks just as much for the state of family films. The only way to elevate a film like The Lorax above the dregs of the family-film trough is to treat the source material and its message with the respect and due diligence they deserve. You can add all the cute little barbaloots and truffula trees and Taylor Swifts you want, but if you end up drowning out the Lorax's message, what have you accomplished?

MINORITY REPORT: At first glance, I thought this film was called Dr. Seuss' The Lowtax, a whimsical, poetic account of how our fearless leader valiantly fought and defeated the evil Uwe Boll. - Ian "Professor Clumsy" Maddison