EXPECTATIONS: Hey, remember back when That '70s Show was on the air, and your dad kept saying "Soon they're gonna have to make That '80s Show hurr hurr hurr!" Remember when they actually tried to pull off That '80s Show? Neither does anyone else, but I swear it happened. Anyway, two of the producers of That '70s Show and one of its stars have teamed up to give the '80s another shot, because apparently we love that decade now. I'm leery about this film knowing that it's been tried and failed already. On the other hand, there is some hope. I mean, it is based on the third best Eddie Money song. (After "Two Tickets to Paradise" and the theme from Quack Pack, respectively.)

REALITY: Man, that's a lot of cocaine. Seriously, the last movie I saw that had this much on-screen cocaine use was called Blow. This movie has out-coked a film named after coke. I'm making a big point of this because Take Me Home Tonight finished filming more than four years ago, and it has been waiting for a distributor since then. Topher Grace claims that no studio wanted to risk releasing this film because of the excessive drug use in it, and you know what? I believe him. No, totally. You were ahead of your time, man. People weren't ready for cocaine in 2006, five years after Traffic was nominated for Best Picture. In fact, Hollywood was just waiting for the right time. They were waiting for Charlie Sheen! They were waiting for the word "cocaine" to be on everybody's lips (not just the upper one), and then they would make their move! That is absolutely... bullshit, Topher. Studios don't avoid movies for four years because they have drugs in them. Studios avoid movies for four years because they aren't very good.

Let's get one thing straight. If you're going to make a movie with a member of the That '70s Show cast, it should be Topher Grace. He and Mila Kunis are the only two whose careers have found the balance between being infuriating (Ashton Kutcher, Wilmer Valderrama) and not actually existing (everyone else, Wilmer Valderrama). Grace is a pretty decent straight man, he really is. He has a great deadpan delivery that hammers the film's scant funny lines, and he has beautiful non-reactions to insane stimulus, and that counts for a lot in comedy. However, being a straight man is only successful if there's anything interesting going on around the character, and here, there's not. 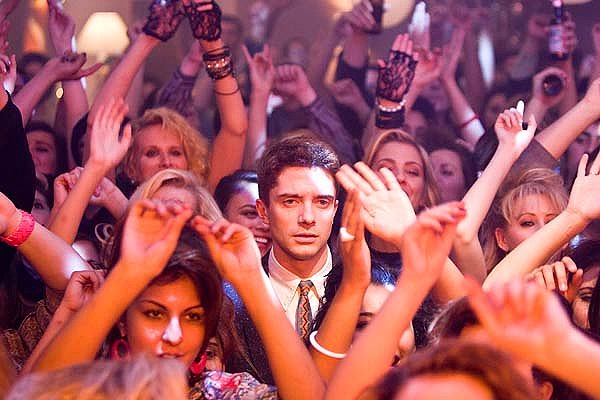 In a brief and rare moment of self-reflection, Topher Grace wonders whatever happened to the first syllable of his name.

Grace plays Matt Franklin, an aimless MIT grad who lives at home and works at the local Suncoast Video. Yep. Matt runs into his high school crush Tori (Teresa Palmer, who stole I Am Number Four in 30 minutes of screen time), and in an effort to impress her, he lies about his career and claims to be an investment banker with Goldman-Sachs. Yee-up. With his wacky best friend Barry (professional bag of sweat Dan Fogler) and his responsible twin sister Wendy (Anna Faris), he goes to a party and continues the lie to impress her. Along the way, he and Barry have wacky misadventures, like snorting cocaine and stealing a red sports car. Oh. Yeap. Chicka-chik-ow. All the while, Matt gets to say things like "You can trust me. I'm a Goldman-Sachs man." Fucking. Yeeee-uuup.

I don't mean to harp on That '70s Show here, because we shouldn't compare the two. But in the early episodes of the show, they had this really weird habit of making sure that the audience knew "Times are different HERE IN THE '70S, YOU GUYS. I can't fill up the car, Dad, because of the GAS CRISIS OF THE 1970S! I hope JIMMY CARTER can fix this, since HE'S THE PRESIDENT BECAUSE WE'RE IN THE '70s!" Take Me Home Tonight does the same thing, but so much worse.

Wendy's boyfriend Kyle (Chris Pratt) is the quintessential '80s Douchebag Movie Guy, complete with comically popped collar and challenging Come-At-Me-Bro attitude. At one point, someone comments on some shoulder pads, and Duran Duran plays throughout. (Let me just say real quick, if you name your movie after a popular song, you should be required to use that song SOMEWHERE in your movie. At least as the first song of the credits.) Hell, Anna Faris is clearly trying very hard to emulate Drew Barrymore's character from The Wedding Singer, and that's not even really an '80s movie, it's a movie from 1998 that takes place in 198-whatever! This movie had more overt references than Hot Tub Time Machine did, and that was damn near a parody. Take Me Home Tonight plays it completely straight, as though all the characters periodically forget what cultural decade they're in, and need to remind each other occasionally. (OH MY GOD, WHEN THE HELL ARE THEY? Oh, I just made a Back to the Future reference. Either it's the '80s or I'm a huge nerd.)

You know what? I want to take a break from reviewing this movie and tackle an important question: Why the hell are we so in love with the '80s right now? Both this film and last year's Hot Tub Time Machine celebrated and lampooned the decade to the point of extremity, and recently Jay Dub criticized Easy A because all its characters lovingly referenced films made before they were born. So why all this misplaced nostalgia? Because we're back in the '80s again, that's why. I just played a damn video game that had Christopher Lloyd as Doc Brown. We have our own Madonna (Lady Gaga), we have our own Hulk Hogan (The Rock/ John Cena), we have our own Jimmy Carter (Obama) who will probably be dethroned by our own Ronald Reagan (Take your pick, then submit it to the Republican party.) Hell, we have our own AIDS. (It's AIDS.) We're heading back to that period in our society, people, and even though I wasn't around for most of it, from what I can tell, that sucks ass. And it's the reason films like Take Me Home Tonight should not be praised. They are dangerous revisionist history, and they should be condemned.

Anyway, back to the movie itself and its damning shortcomings: Take Me Home Tonight absolutely fails to make us care about Matt's plight. At no point in time is Matt portrayed as anything but a whiny child, and it's hard to sympathize with him. I have no reason to want Matt to get together with Tori, and judging by Grace and Palmer's lack of chemistry, neither does she. It's not unreasonable for Matt's dad to expect him to put his degree to use and get a real job, yet he acts like it's asking the world. (More evidence that this movie was not held back on purpose: It would have been a lot more powerful four years ago when it wasn't commonplace for people with Bachelor's Degrees to pump your gas.)

Barry, on the other hand, is a genuinely likable guy who is having a really shitty day, and you want him to succeed by hooking up with Holy-Shit-Is-That-Michelle-Trachtenberg? (Michelle Trachtenberg). Instead of playing off the buddy comedy idea by using Topher as a foil for Fogler's eccentricities, the two mostly go their separate ways and have adventures off on their own, which isn't very interesting at all when we have to watch Topher Grace whine about how hard life as a white, upper-middle class, genius MIT grad is. I'm not saying Dan Fogler is great; he's not, but he's certainly the best thing in this film. He's the movie's McLovin: A subplot that's vastly more interesting than the main story. To top it all off, the film climaxes with Matt stealing a moment that should by all accounts belong to Barry. Man, Dan Fogler, mop off your disgusting brow and get your shit together.

Actually, Dan Fogler, if you are reading this, I'd like to thank you for saving this movie. Your wacky misadventures in perspiration were the scant bright spots in an otherwise dreary 114 minutes. However, I do have a concern for your future, Dan. I'd like you to read this review of Gulliver's Travels and rethink your career path a little. It's very clear that you want to be the next Jack Black, and you certainly could do that if you had the amount of talent he does, but do you really, really want to? It's pretty clear that Jack Black doesn't want to be Jack Black anymore. Just like I don't want it to be 1987 anymore. Unfortunately, Take Me Home Tonight makes it difficult for anyone to get what they want.

(By the way, the number that Tori gives Matt is a real phone number, a la '80s hit "Jenny (867-5309)." If you call it, it disappointingly directs you to an out-of-service number at Universal/NBC and other numbers you can call for their offices, so don't bother. Or do. Tell them to make better movies.)

MINORITY REPORT: I have very little memory for the 1980s, but there is one thing that remains with me vividly, and that is unchecked substance abuse. Not to say that I partook in any of it, but I certainly remember the ease with which fatal drug overdoses could be swept under the rug of an "accidental death" verdict. Simpler time, halcyon days. - Montague "Legally Sane" Smythe