EXPECTATIONS: 127 Hours is one of those "Also Ran" Oscar contenders that everyone's heard about but nobody actually wants to see. Go ahead and ask around: Nine people in ten will say "That movie about the guy who cuts his arm off? That sounds gross." While James Franco can almost certainly carry a movie like this on his own, Danny Boyle's films always seem to suffer from terrible third-act plot twists. Sunshine becomes a slasher film, 28 Days Later... becomes a rape thriller, Millions becomes some kind of weird Christmas movie, you get the idea...

Given that we already know how Aron Ralston's real-life story ends, I can't even begin to imagine what kind of ridiculous turns of events Boyle has planned.

The movie begins with thrill-seeker and potential crazy person Aron Ralston (James Franco) leaving home for a fun-filled weekend in a Utah canyon. Ralston bikes out to Blue John Canyon like a BMX stuntman with a death wish, and he happens across two lost hikers (Amber Tamblyn, Kate Mara). After guiding them through the canyon and seeing them off, Ralston soon thereafter slips on a loose boulder and winds up on the canyon floor with his right hand pinned beneath the boulder. After screaming for help for a moment or two, Ralston comes to realize that he never told anybody where he was going, and that he might very well die in this canyon.

Now, ninety minutes of a man standing in a canyon screaming for help would've made for a terrible movie. Fortunately, Danny Boyle is one of those directors who knows how to spin an interesting narrative out of just about anything (See: The Beach. Wait, no, don't see The Beach.) While following Ralston through his predicament and watching his various attempts to escape, Boyle also doubles back and shows us glimpses of the man's life before this incident. This is where the real heart of the story lies. Through multiple flashbacks, we see Aron Ralston's childhood and teenage years. We see his father taking him out to watch a sunrise over the canyon; we see young Aron playing around with his parents' camcorder; we see a bored Aron berated by an ex-girlfriend. 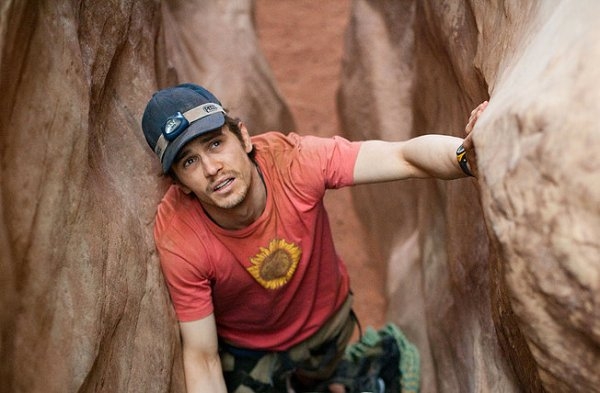 All of these flashbacks and visions combine to give us a picture of what kind of person Aron Ralston is. These glimpses into his younger years color exactly the Aron that we see in James Franco's portrayal: an energized adrenaline junkie who loves being alone in the wilderness. While there are certainly subtleties to his character, that's the broad stroke. We're led to believe that it's Ralston's disdain for society that brought him to that canyon, and it's the same stubborn selfishness that he's going to have to break in order to stay alive.

In some ways, Ralston's story echoes the Mark Zuckerberg we see in The Social Network. Just as Jesse Eisenberg plays Zuckerberg as a detached genius who passive-aggressively hates the people around him, James Franco plays Ralston as a similarly detached hiking savant with some kind of odd grudge against the world that can only be expressed through rock-climbing. Both movies eventually come around to the fact that even though we're well within our rights to think everyone around us is a fucking idiot, we still need those people around to keep us sane.

That grudge against the world is ever-present in Franco's performance. While there is an amazing energy to his performance, there is always the sense that the energy is a bit of an act. After a couple days of being stuck in that canyon, we see Ralston start to crack as he starts acting out the five stages of grief. After days of wishing he'd done this or not done that, he begins his morning by impersonating a talk show host and interviewing himself on camera about his predicament. This scene runs the emotional gamut from hilarious to downright depressing, and it's the one they'll probably use in James Franco's Oscar clip next month.

And then, of course, there's "the scene." Watching James Franco cut off his right forearm with a dull pocket knife isn't scary or horrific in any kind of horror-movie sense. It is the tensest moment in an already emotionally draining film, but it's also fairly clinical in its approach. Despite being warned that it was exploitative and done strictly for shock value, I found that scene every bit as tense and "heroic" as the film wanted us to think it was. It's hard to watch a film about a man trapped and doomed to death and not want to cheer him on as he escapes by any means necessary. Is it perverse to cheer someone on as he cuts off a limb and escapes certain death? Maybe, but if seven Saw movies can do it, then so can this one.

Is 127 Hours life-affirming? Yes, in the sense that it makes you really appreciate having two arms (or any arms at all). It's the kind of movie that actually makes you feel better about the human race. We learn about Aron Ralston as a character; why he did the dumb thing that he did, and what kind of person he became as a result. Can any of the Saw movies say that much?

MINORITY REPORT: I certainly had a very visceral reaction to the iconic moment, as did the audience around me. However, 127 Hours is not really a film about survival so much as it is a film about regret. Aron deliberately changes his memories so that he says the right thing or isn't so stupid, and then he builds images of loss and melancholy upon that. 127 Hours is entirely a film about its narrator, and the narration itself is handled in such a uniquely visual and powerful way that I wouldn't be disappointed if it did win Best Picture. - Ian "ProfessorClumsy" Maddison