REALITY: An Open Letter to Christian E. Christiansen, the Director of The Roommate:

Let's just get this taken care of right off the bat: You have a douchebag name. There, now that that's out of the way, we can get to the important business at hand. Mr. Christiansen, you have made a film that causes me to fear for an entire generation. No, not the college-age characters in your movie, I couldn't care less about them. What you have made me do is worry about the thirteen-year-old girls in the theater with me, the ones who think you have made a good film because they don't understand what a bad one is yet.

Now, I don't claim to be a filmmaker, but I am a guy who watches a lot of movies. Clearly you are, too, sir, as your movie goes through every possible cliche and trope that has ever existed. What you don't seem to understand, though, is that even though you're ripping off paying homage to existing material, that doesn't mean you are absolved from having to provide any kind of plot or character development of your own.

Let's start from the beginning: Sara (Minka Kelly) arrives at college, checks into her room, and starts up an immediate friendship with Tracy (Aly Michalka). You base their entire friendship on two lines. They're not even interesting lines, they're essentially "Hi, I'm Sara" and "Hi I'm Tracy, sorry I bumped into your stuff." Then they become the closest of friends after that and go to parties together. This is what you're telling your audience, Christian: "Hey kids, everyone who says 'Hello' to you is a nice person. Go wherever they tell you to."

Which brings me to another point: No one, absolutely no one, starts up a relationship by literally crashing into someone and spilling some sort of drink. Screenwriters who do this are lazy hacks, and everyone knows it. Yet in your movie, you do it twice, to set up two different characters, within five minutes of each other, in the first seven minutes of the film. If I weren't so angry, I'd be impressed by your ballsiness. But I understand, you don't have time to make anything like "protagonists" or "story structure," you need to get going and proceed to The Roommate herself, Rebecca (Leighton Meester). Well, I'm glad you hurried through the beginning to make time for all the nothing that happens after that! 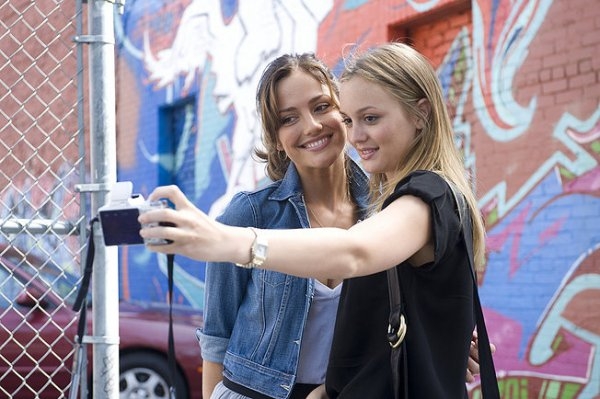 Moments later, this camera was stolen and listed on eBay. I bought it myself and immediately deleted this photo just so the world could be spared such a banal memory from being captured.

Seriously, you introduce Rebecca, the person we all know is going to be our psychotic villain, and then do nothing with her for about half an hour. Two characters are talking, one turns around. There's Rebecca, looking creepy. Tell me, Chris, when you filmed that the first time, did you think "That sure was exciting filmmaking. I better put that in there four or five more times?" Because you were wrong. At first I held out hope for the teenage girls who surrounded me, because every time you cut to Leighton Meester's dead expression they didn't gasp or shudder; they laughed. They laughed at your movie. Justin Bieber's fanbase laughed at your horror film. How does that make you feel?

Then you pulled out the big guns. And this is why you're either evil or incompetent, possibly both. You see, when you introduce a kitten into the lives of characters like this, I know that kitten's dead by the end of the movie. Readers at home, you know that kitten's dead by the end of the movie. (And not because I just told you, either.) The teens out for girl's night checking their cell phones beside me: They don't know that. They don't know what happens to the rabbit in Fatal Attraction, either. You're tricking them into thinking that you're breaking ground, when in fact you're repackaging things we've all seen before but doing it in a way that makes it PG-13 OK! And that's why these people not only got into the film by the end, but also some of the girls in my audience actually clapped. I'm okay with people clapping at movies, but not even the projectionist deserved this praise. What he deserved was hand sanitizer.

"But Vargo," you may argue, "Aren't you spending more time reviewing your audience than the film?" And to that I respond, Yes, smartass, I am. But I'm doing it for two reasons: A) Your film is really, really boring, and B) In this case, audience and film are essentially one and the same. Think about it. You clearly designed this film for one audience and one audience only: Preteen girls with helicopter parents who have never seen a scary movie in their life. Girls who think that Aly Michalka getting her navel ring ripped out is the only bad thing that has ever happened to a woman in the shower in the history of cinema. I've been known to give films credit for knowing their audience, so why aren't I giving you a free pass? Because this is manipulation, pure and simple. They don't think your movie is good. They think dozens of other movies are good that they haven't seen yet, because they are thirteen and stupid. The Roommate is "Baby's First Suspense Movie," and while there's certainly a place for that in cinema, your work actually seems to insult this genre and this audience. I shouldn't allow you points for contributing to the dwindling intelligence of youth.

Your editing is all over the place, your actors have nothing to work with, you completely waste Billy Zane, and your "Big Reveal" is that the girl we all thought was crazy is (Surprise!) actually crazy. That is not how storytelling works, dammit! Oh, and by the way, when you dedicate a good portion of the film to having your antagonist dye her hair and change herself to look more like the protagonist, don't make her blonde again in the very next scene. Or at the very least, let us see her. Somehow, you manage to take the "Show, don't tell rule" and do neither. In conclusion, sir, your movie, it is not the best movie.

P.S: I just realized naming the Crazy Girl Rebecca might be another Hitchcock reference. If this is the case, I hate you.

MINORITY REPORT: How do you "waste Billy Zane?" When was the last time he even did anything that was worth watching? Presumably by "waste Billy Zane," you mean "wasted a character on Billy Zane when you could have given it to an actual actor." -Ian "ProfessorClumsy" Maddison