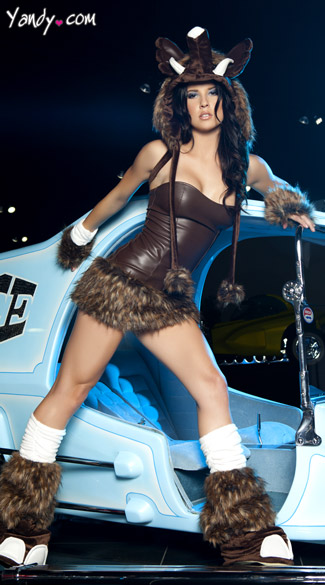 Dr. Thorpenstein: Man, she just looks like Ke$ha on some particularly ill-advised shit.

Zackula: It's the same basic format as the rooster costume. Apparently that is the template for "sexiness" upon which the brain trust at Yandy can superimpose any animal or lame movie license.

Dr. Thorpenstein: For those of you with too much pride to look at the site, you can actually mix-n-match all the absurdly expensive costume components, so you could be Sexy Beetlejuice but with Sexy Mammoth feet and a Sexy Rooster comb.

Zackula: Or Sexy Billie Jean with your greasy curls lubing up the inside of a mammoth's head.

Dr. Thorpenstein: I am a sexy chimera, here to titillate you with my mismatched sex parts.

Zackula: Speaking of the site, I just noticed there's a little icon at the bottom that says Free Panty With Any Order. I mean, okay, I get it, but who would not feel creepy ordering a Michael Jackson costume and you get the box and right on top is a pair of panties?

Zackula: I'll answer my own question: Corey Feldman would not feel creepy.

Zackula: He would slip right into a leopard print g-string and put on his rooster comb and arm band and start dancing on the light-up tiles of his hall floor.

Dr. Thorpenstein: If I could get serious for a moment, I'm so outraged at our society's constant insistence on sexualizing woolly mammoths.

Dr. Thorpenstein: Let these beautiful beasts rest in peace and be remembered with dignity. They're not objects. It's an extinct Pleistocene species, not a costume.

Dr. Thorpenstein: I understand that it speaks to the male's deep psychosexual need to get together with a few buddies and chase women for days across the icy tundra in pursuit of some meat, but there's no reason to wallow in the baser instincts of males by constantly rubbing flirty mammoths in their faces.

Zackula: These costume designers just go where the money is and the money is in making guys want to fuck prehistoric animals.

Dr. Thorpenstein: I guess there are women out there who'd say it's not about men, they just want to dress like mammoths to look good and feel good about themselves, and more power to them, but it still makes me a little uneasy.

Dr. Thorpenstein: I blame the Flintstones. Maybe it's because a whole generation of boys grew up having their first autosexual explorations while watching a hot baby mammoth vacuum up garbage.