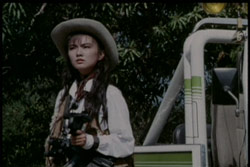 Tootie may have a magic pole, but Seetoe has a magic wardrobe!Tootie reveals that his family has a dragon pearl and Seetoe suddenly remembers that not five minutes earlier she was almost run down by a pair of stupid tanks being driven by Zebrata and Malila. Seetoe and Tootie, with surprising effort, come to the conclusion that the bad guys must be headed to the temple in the woods in search of grandpa's dragon pearl. Tootie flies off through the woods, followed closely by Seetoe in her jeep, but it's way too late. Zebrata, Malila, and a whole clutch of blue light special troopers arrive in the wooded temple and begin exploding anything and everything that conceivably contain a pyrotechnic charge. The ever-sassy grandpa manages to elude their explosions for a while but is eventually caught in the crossfire.

When Tootie and his newfound friend finally make it to the recently exploded temple in the woods Tootie has a great "Nooooooooooooooo" moment. Not only have the nefarious minions of King Pussyhorn stolen the prized family dragon pearl, they have also stolen the prized family. They have absconded with gramps and Tootie enlists the help of the imminently spineless treasure hunter Seetoe to help. After Tootie wipes the tears from his eyes and gets his flying orange shit together he climbs into Seetoe's jeep and they set off in hot pursuit of Zebrata and Malila. As they approach the stupid tanks, Zebrata and Malila launch huge explosions in their direction, culminating in a series of blasts that destroy the jeep. Rather than finishing the pair off, Zebrata and Malila hurry along to no doubt make things explode somewhere far away.

Tootie commandeers an elephant to serve as their new form of transportation and Seetoe changes into a floral dress, does her hair, and starts eating a stack of big green leaves that she refers to as "jerky". No, I have no idea what happened either. One minute they're standing next to the burning jeep watching the grampsnappers disappear in the distance and a dissolve later they're on an elephant and Seetoe has spent the day in a beauty salon. While chillin' on the elephant we learn of Tootie's deep back story, which consists of "grandpa found me in the woods and taught me kung fu". That sort of line might work on a closing time skank at Jim's Beer Pit, but a classy treasure hunter and formal dress beef jerky enthusiast like Seetoe would never fall for it. 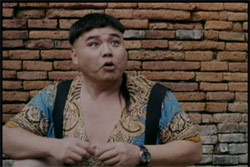 That'll do, rapist. That'll do.Minutes, hours, days, or seconds later the pair spot a young girl being chased through a field by a hideous solid black fat man with a pompadour and a pig snout. That's just how the Dragon Ball movie rolls. From Jeep chase to ebony pig man rapist in 6.5 second. The pig man taunts the girl saying she's such a pretty girl and she will be his wife. She screams that she's too young to be married. Seetoe doesn't like seeing pig men sexually assaulting young girls and insists that Tootie intervene on the young girl's behalf. It would be generous to refer to the ensuing combat between Tootie and the pig man as "comical". After being beaten repeatedly by Tootie the pig man flees into a canyon and pleads for mercy. When Seetoe and the young girl confront pig man and rebuff his requests for clemency pig man explains that he has a soft spot for pretty girls and then tries to rape both of them.

Tootie prevents things from escalating further and pig man explains that he could be a useful asset to their group. He demonstrates his ability to transform into various well-dressed and extremely manly women. Then he turns into a glowing cartoon bat and tries to escape. Tootie puts a stop to that in a hurry with a bit of hyper realistic magical pole on cartoon bat action. Pig man turns into a much more human fat man with a Moe haircut and explains that he is a pig fairy. Tootie reveals that he is related to the monkey fairy, which causes pig man to start calling him brother. Their bonding is shortlived, as the gayest cowboy ever appears on a nearby ruin with a parrot on his shoulder. The parrot explains that the gay cowboy is Westwood and Pig Fairy realizes that he is an extortionist bandit.

Tootie is having none of that, so Westwood tries to gun the pair down with an M-60 machinegun. Tootie easily deflects the bullets with his magic pole, so Westwood throws off his cowboy hat and poncho and discards his gun. Revealing that beneath his hardboiled gay cowboy exterior is a 12 year old French dandy in yellow and gold finery. Tootie and Westwood battle for several minutes, exchanging pole, sword, and various wire fu techniques. Westwood is ultimately sent plummeting to the ground. When he awakens to see women he flees in Benny Hill speed terror because of a bizarre fear of the fairer sex.

Later that night, rape victim starts talking around the campfire and reveals that her name is Jade and she is the daughter of the Town Chief from the opening sequence of the movie. She tells Tootie and friends that King Horn killed her family, exploded her village, and stole the dragon pearl for his nefarious purposes. Before dying her mother told her to visit the Turtle Man and request his assistance. Luckily for everyone but King Horn and the viewer, Piggy knows where Turtle Man lives! Before telling the group where Turtle Man lives, Piggy warns that even though Turtle Man's kung fu and magic are both unrivalled, the reclusive Turtle Man is also a "sex maniac" who is much worse than Piggy.