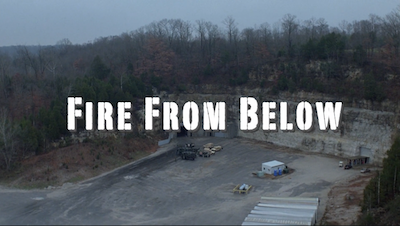 Overview: An evil mining company digs up an incredibly deadly super-chemical/roaming fireball that explodes when it touches water, or sometimes it doesn't. Also, it's a thermonuclear bomb, because why not? Only roaming professional geologist and amateur gumshoe Kevin Sorbo can save us from an inevitable fiery death by...blowing up the exploding chemical. No, really, he blows it up.

The Case For: If you are Michael Bay, you will probably enjoy this movie, because it's one step closer to your platonic zen ideal of just removing all of the actors and plot and having a movie where intelligent explosions fight each other (while exploding.)

The Case Against: If you are a fan of Kevin Sorbo's work, you should probably skip this movie, because knowing that he personally Executive Produced every stupid line coming out of his word-hole will prevent you from blaming his performance here on the people around him.

Hydrogen: Well, it's finally happened. Through some kind of ancient, unholy witchcraft, EXECUTIVE PRODUCER Kevin Sorbo et al have managed to accomplish what no one thought possible (no, not a good Kevin Sorbo movie): a more stupidefyingly nonsensitardical "oh no, the deadly weather is chasing us" movie premise than even Absolute Zero.

Trillaphon: Welcome to Fire From Below (not to be confused with multi-$10 bill grossing Steven Seagal toxic waste punch-up Fire Down Below). If there's ever been a movie that really earned the shit out of its title, it would have to be this one:

Hydrogen: Listen, I know this is only the first review of the new year, but I'm pre-emptively calling that dude exploding from taking a piss as the Best Death of 2016.

Trillaphon: Does it burn when you pee? You may be one of the millions of Americans who could hypothetically suffer from Chronic Urinary Explosia every year. Ask your doctor if Asbestostream(tm) is right for you! Asbestostream: because even cancer is better than getting blown to smithereens dick-first! (Warning: may cause drowsiness, irritability, herpes, cancer, ultra-death, regular death, and in some rare cases, severe bitchpleaseia.) Asbestostream - from the makers of Fecafreeze!

Hydrogen: Ah, the marvels of modern medical science. Speaking of which, how about a nice whopping load of some of the best-worst pseudo-science horseshit you'll hear this side of a Creationist geology seminar?

Trillaphon: Some kind of cold fusion element in the stage 5 seismic tecton chamber must have catalyzed the liquid fusion compression inside the vaporized hemoglobuled hyperbapes, explaining the rapid expansion of polarized proto-coolers and causing a chain reaction with the molecular crabdiprons...

Hydrogen: Ahhh, yes, I see it now! Hence the atomized nucules of gaseous thermal proton magnetos combusting from the unstable crystals of pustular de-borged fusion singularities at under 5 krotons per mega grungo!