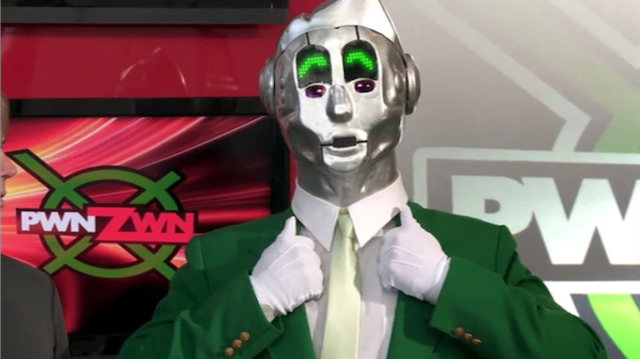 Yes, it's all about The Game(tm). And Monster(tm) brand energy drinks. And maybe a little bit about these Dumb Chairs(tm). That's it though, other than that it's really almost entirely about The Game(tm). And the crisp refreshing bite of Monster(tm) - which on a related note is in fact proven to help keep you gaming strong all day long - it's kind of noticeably about that too. And maybe these Stupid Gloves(tm). Wait, what were we talking about again?

Oh, right, the movie. One of the hallmarks of a great movie is complex, relatable characters, which VGHS of course has none of. But let's meet our varsity roster of oxygen-wasters anyway. The 90-pounds-soaking-wet underdog hero is Brian "Loves Dyin'" D, artfully portrayed by Josh Blaylock using the patented Shia LeBeouf Sputter & Stutter Acting System. Josh really makes the role his own by pretending at all times that he just took the world's most sour candy from a top secret lab at the Wonka factory without permission, and is in fact both sucking on that candy and beginning to realize with deep and serious horror what it is.

Anyway, back to Brian D the character, the man of the hour. He's a real everyman for the gamer generation, and he gets to go to a special school for being awesome, wow! Except he's an everyman in the same caliber as, say, Gomer Pyle. Brian spends the entire movie bungling ass-backwards through every challenge like a demented rodeo clown, and except for a few bizarre and painfully contrived moments of e-peen glory, he's uniformly terrible at absolutely everything he does. He's not the epitome of a badass gamer, he's the kid playing Call of Duty on his mom's sofa and talking smack to everyone in the game, even though he's worse than all of them. If you kill him five times in a row, it's because you're a "tryhard" and he's totally got more skill than you, but he's too busy scoring with lines of imaginary women to hold the controller with both hands. 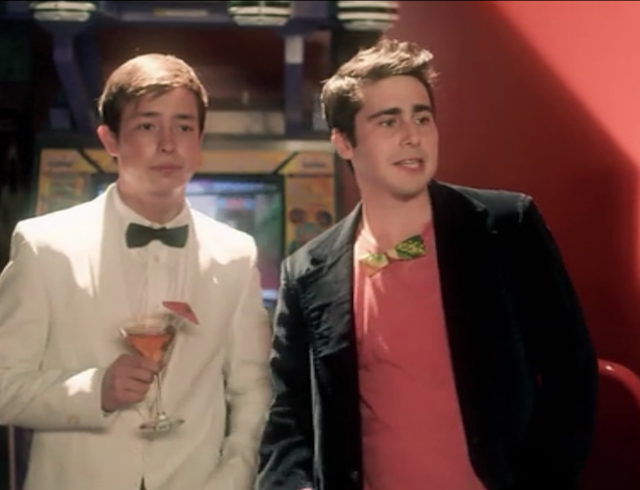 Crappy movie pitfall #37: reminding your audience that they could be watching Casablanca instead.A shining example of BrianD's elite skillz is the scene in which he tries to throw ace video-game-jock and varsity FPS captain (we know, we know) "The Law" a curveball by challenging him to a DDR DXM match. See, because DDR DXM isn't a serious enough game to have a school team for, but Brian secretly plays it behind closed doors, and there's no way a "jock" will be good at it. So they start things up in front of a cheering crowd of drunk teens, instantly giving us unwelcome flashbacks to The FP, and lo and behold Brian starts getting his ass handed to him. So what does he do? He turns around and starts dancing backwards. See, at first he was losing because he sucks at everything, but now he's losing because he's totally not trying and having fun with it, and that makes him the bigger man so he's totally cool and a hero/hustler now.

Fuck, how about we get to know the guy who's not incompetent and insufferable instead? He is The Law, played by YouTube "personality" Brian Firenzi, and the ladies inexplicably hurl themselves at him like depressed lemmings everywhere he goes, despite the fact that he has all the charisma of a foot fungus colony:

But of course, this is all obviously an intentional part of "the joke" that we're totally all in on, not that knowing that makes it any easier to watch, like the scenes where he's sporting a big fake mustache for no reason. As much as The Law loves suctioning his face to the camera like some kind of giant kooky lamprey, he must've spent some time offscreen earning that writer credit too. So it turns out The Law is not an improvement over Brian D in terms of not inspiring white-hot burning hatred in the viewers. "Aha, but you're supposed to hate him, he's the villain! It's genius!" Touche, except you're not also supposed to hate the hero, so something seems to be miscalibrated here.

There's at least a short moment of relief when Zachary Levi shows up to collect his paycheck/envelope of nude blackmail photos/whatever he got for doing this. His 60 seconds of screen time make it painfully obvious that there's no video editor plug-in that can fix acting yet. Seriously, he's not even trying at all in his performance as a vaguely Texan "FPS professor", but he just obliterates everyone else in the scene with him like some kind of mythical acting yogi. They all look like middle-school kids stumbling through some crappy thanksgiving play while chewing gum and tripping over scenery by comparison. But we're not here to tell you about things that aren't mind-bendingly terrible, so how about a guy named "Games Dean" (let that sink in for a minute) who looks exactly like you expect him to look?

Underneath all of the wicked-sick APMs, KDRs, BLTs and Spinning 360 No-Jokes, VGHS is really just a loose schmear of every '80s high-school drama fest ever made, and some that were never made (for good reason.) Everything that happens is nothing more than a kinda sorta semi-stylish delivery system for a cheesy off-kilter romantic comedy, and then, for whatever reason, a ten-minute detour into flaccid Casablanca homage which fits in with all of the above about as well as a Bill Cosby at a Klan meeting.

We'll admit it: Video Game High School has good production values and good special effects. Great, even - particularly for an independent/crowd-funded YouTube video series. And it's worth remembering that a lot of people are first-timers here, so we can't rip into the acting too badly. But production values alone don't add up to a good movie, not even close. What Freddie Wong et al have managed to prove to themselves and everyone else with this movie is that there's still a massive fucking gulf between a two-minute YouTube short and a two-hour feature film, and only one of those things can be propped up by novelty value, self-congratulatory pop-culture references, and a fat guy in a fedora named Games Dean.