As you can see, Alec and Shanna's Tandy Patrol already have superiority over the actual police: 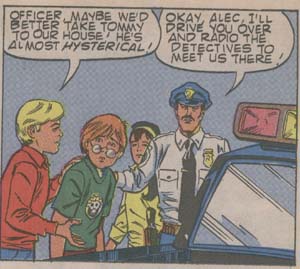 Tommy is hardly "hysterical." Look at him staring at the reader with that RUH-ROH look on his face. It's clear that Alec and Shanna are going to administer some good old-fashioned street justice before the detectives show up. With any luck, Tommy will wish he was dead more than most redheads usually do!

With Tommy's information, Buzz is busted, and squeals on Clayton Drugs, the Dean at Addiction University. 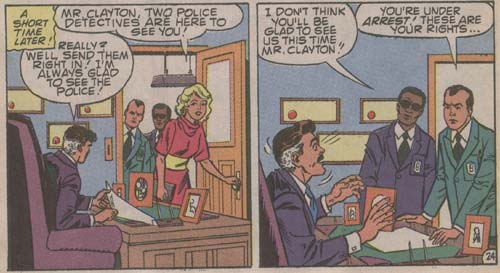 So, all the loose ends are wrapped up, but what of Tommy? 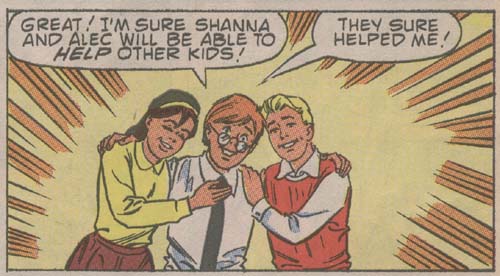 He's on his way to rehab! And, as you can see, he's removed the green T-Shirt that is common apparel for drug users. Despite his parents being murdered by Big Jim, Tommy seems to be pretty chipper about everything. And, together with Alec and Shanna, the Tandy Patrol, they can all emit some sort of dangerous radiation. At least that's what I think is happening in this panel. Perhaps it stops drugs or something.

So what should you have learned from A Deadly Choice! (please note that if you haven't learned the following things you are wrong):