Alec and Shanna's precious Tandy can't save them from everything, however, as when they get to school the next day(!) they find out that their (anti) drug hotline has been shut down. The reason? An anonymous tip has been called in saying that Shanna gave a student information on where to buy drugs. Christ, Buzz didn't even have to try to take that little organization down. I assume that he could have called the principal and told him that he had pretty good proof that Shanna was a Frankenstein, and it would have had the same effect.

"I'm sorry Shanna, we'll have to shut the hotline down. We've got an anonymous tip that you're a... Frankenstein. Someone! Restrain her! Watch out for those neck bolts! It appears that they're invisible this time!" 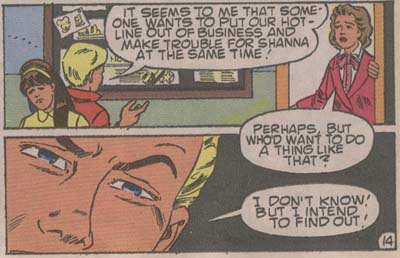 While Alec and Shanna plot, Tommy's life is falling apart, as is the case with most natural redheads. It probably has very little to do with drugs. When Alec and Shanna run into him, Tommy's odd behavior and collection of burnt teaspoons spell nothing but trouble, trouble that can only be resolved with the use of a fine product from Radio Shack!

I had second thoughts about showing so much of this page, but my first thoughts won the thought battle: 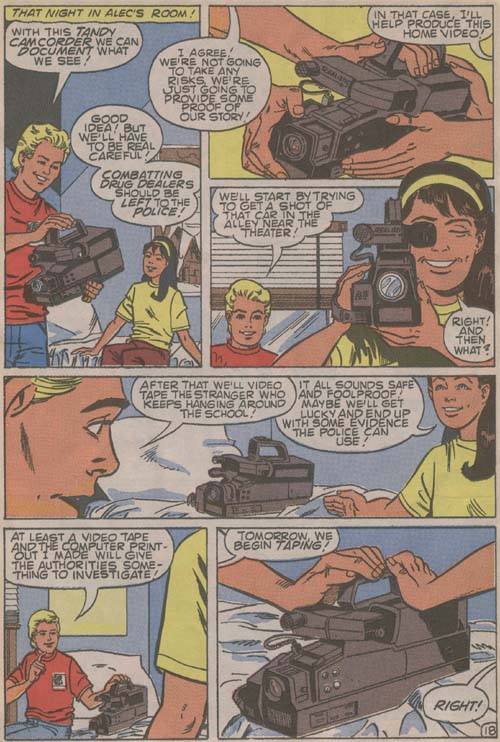 The writer (yes this comic was written) of this comic finally realized by this point that showing kids how to set up their own drug stings is a terrible idea, so he gives Shanna a little caveat to avoid any Radio Shack lawsuits (they were terrified of litigation after all of those RC cars exploded during the mid-1980s). In a nutshell, Shanna says "We shouldn't do this, and it's very dangerous. So instead of not doing it, we should just be careful! Alec, quit looking at my thighs."

So, with the disclaimer fully in place, Alec and Shanna climb to the top of a building and videotape Dr. Drugs picking up a wad of bills from Buzz. You think someone as dapper as Dr. Drugs would have one of his flunkies do these menial tasks, but I guess he didn't have to work on his dissertation that night.

The next day, Alec and Shanna film A Deadly Choice! Part Two! featuring the illegal activities of Tommy and Bobby. With his redheaded powers of perception, Tommy notices that he's being recorded by Alec and Shanna. He goes to them for a little heart-to-heart, and when they make it to his house, disaster happens! 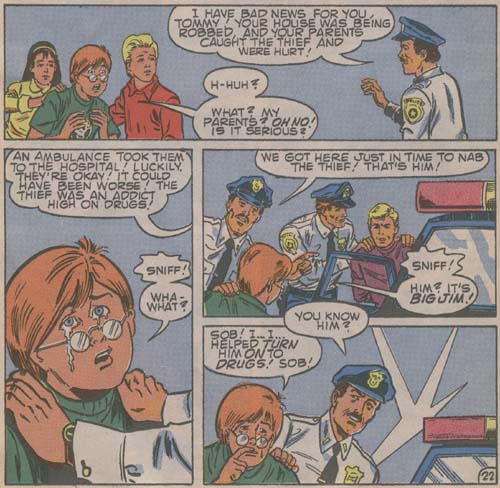 Please do not reveal the shocking twist of A Deadly Choice!

Yes, Big Jim is high "on drugs." You'll notice that in all of this anti-drug stuff made for kids, it's never clear what drugs people are taking, buying and selling. Hell, there's not even a distinction drawn between caffeine and heroin! I bet little idiot children who were taken in by this garbage were actually calling the police every time they saw their parents open a Folgers can, or shoot up in the bathroom.

If you think the last one is justified, you obviously weren't born in a shopping cart to parents who looove to party.