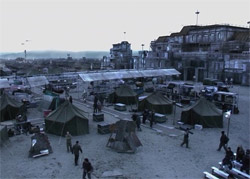 Who wants to spend time on that terfhole? At least it feels like a bazillion. I have been living on board the homeopathic spa ship Soothe for over a year now. It has done real wonders for my pores and my moisture levels, but it sure as heck hasn't helped out my sex life.

When I came to Soothe it was a choice between here, the crayon factory ship Bloodlust, the hydroponic rhubarb ship William H. Macy, the mannequin storage ship Impenetrable, or the commemorative coin ship Woe Hammer. They all had their ups and downs, I mean the coin ship had a fantastic gym, but luckily I decided to come to Soothe. I say luckily because a while back all of the other ships landed on New Caprica.

It's this planet that is really, really, really bad for your skin and hair. I was down there once and it was somehow able to give me split ends and alligator elbows in about five seconds. Yech! And those vegetables they grow down there, everything tastes like a turnip. Do you know how much I like turnips on a scale of one to ten, diary? Zero. Zero out of ten is how much I like turnips. I would rather eat the commemorative coins. 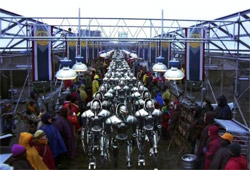 Pretty sure the Silobs came as fashion police. Yuck! If you look like a turnip don't dress like a flower puked.So, on top of being a total terfhole, New Caprica is also now occupied by the cylons (yes I learned how to spell it finally, thank you) who I hate and will never forgive for killing Princess and Bianca. Don't worry, we jumped away with Pegasus when they showed up.

Speaking of which, Lee is in charge of it now, he's married and he has totally packed on the pounds. I would rather get with his dad the Admiral at this point. At least I could give him some masks and concealer for that complexion, Lee is just too fat for words. I'm sure Lee and that Sagittaron hussy he married will be very happy together forever and ever in fatness till fat do they fat.

The irony of me choosing Soothe is that I have been keeping myself looking absolutely fantastic, yet every single man on this ship is totally gay. I've fooled around a little bit with the two that are 99.9% gay and it was like yelling "sit" at a deaf dog; if you wait long enough they'll do what you want, but it won't be satisfying.