Heather's Diary - Gaius Baltar is going to be on trial 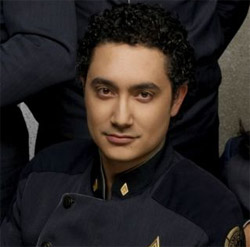 He used to be like totally Baltar's right hand man, but these days he hates Gaius. Well ever since they announced Gaius Baltar was going to go on trial he has like been all into it and fantasizing about how he is going to destroy Baltar at the trial. He even says terf like, "I will frakking make terf up if that's what it takes to bring that kurgsucker down."

Meanwhile, imagine me hearing all this, while at the same time I am reading Gaius Baltar's book he secretly released. It's totally banned. The guy has been given a bum rap in my humble opinion and he deserves a fare trial. At first I pretended like a I agreed with Felix, but after a while we started getting in fights.

When he called me a "frakking klunt" and threw his keys at me that was it, I was out of there. I called Ernesto aboard Soothe and asked him if I could come back and live there again. He was actually excited to hear I was coming back so, you know what, I frakking go where I am frakking wanted.

I swear, all that Galactica breeds are a bunch of headcases and perverts. Too much drama! After Baltar is acquitted maybe I can hook it up with him. He is really hot and I know if everyone hates him then he's probably the only normal one in the whole fleet.

I just watched you enter all of that into your little computer thing there and right as you typed my name for the last time I realized that there was nothing about the refinery. Oh gods, do you want me to just make something up right here on the spot or something? I can totally do that, I have a million and one gripes.

Number one gripe, I work on a cigarette ore ship and I don't even smoke. Not only that, but the smoke gives me these little pimples on my upper back for some reason so I think I'm allergic to it. Plus it is way too dry and hot, I sleep in a bunk with fifteen other people, there are at least three guys here that I think want to rape me, and I don't have appropriate footwear for this environment.

So frak this, frak the fleet, frak Adama and all of the other frakholes on kurg sucking motherfrakking terf-licking Battlestar Galactica. They can eat my klunt.