Alright, as long as we have an understanding, then here is my silent scream at the oppression of the Caprican plutocracy. 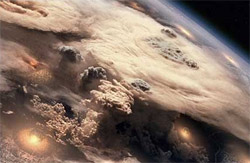 Jeez, I hope Caprica is okay.It is with sad news I finally get around to writing in you for the first time. The silans are back and they have dropped nuclear bombs all over Caprica. Everything is destroyed and everyone I know and love is gone. Mom, daddy, Justynn, Marissa, Princess and Bianca, my Pomeranians, they're all dead.

I was on my way back to Caprica from a meditation retreat at a vineyard on Virgon when I heard the news. The pilot came on the intercom of the first class express flight home (daddy upgraded me, if he hadn't I would still be on Virgon and probably dead!!!!!) and said that Caprica had been attacked by the silans. A fat guy in the seat two rows back said they are robots and that we fought a war against them a few years ago. I dunno, but they sound scary. 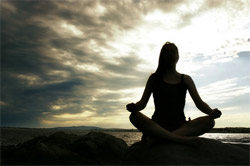 Ommmmmmmmm...The pilot said he was going to turn around and head back to Virgon, but then he came on again later and said there was a battle happening there so he decided to hide. Everyone was yelling and screaming and crying. It was very scary. I was pretty upset too, but I didn't cry. Luckily I had my meditation mantra on my CyPod so I just put that on and let the sound wash over me.

Guru Scorpion says we must first control our body and then we must learn to let it go. To release our stress and our pain and enter the unlimited realm of Contemplation. I have to say, it works. The only part that sucks is that Guru Scorpion's Peace Retreat by the slow moving river probably got blown up by an atomic bomb.

I hope he was Contemplating the infinite when he melted. 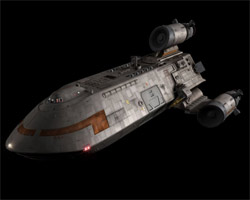 I'm sure everything will be fine even if we all get blastered. Just writing to you to say I'm bored. We have been cooped up aboard this ship for a long time now, and even first class seats start feeling cramped after long enough.

It's funny, people never use the bathroom on first class flights I've been on, but they are using it now. It is pretty darn smelly. I still haven't had to go. I'm meditating to make sure I don't have to go.

A woman is crying because her kids were on Picon and I guess that got blown up. I told her not to be sad, because we'll probably die horribly soon too and some people said mean things to me. This really sucks.

Oh yeah, the captain also said the humans lost the battle at Virgon to the silans. He sounded really sad when he said it so I think that is bad news. The pilot said he's going to go to Rangnar or something and try to find other survivors.

I hope there are some cute guys still alive.

G2G, tummy is rumbling again and I have to think myself calm.