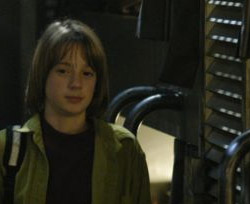 I bet we're all going to be seeing a lot more of Boxey.What a difference a couple days can make! I feel so much better now.

The pilot of my ship found the other human ships at Ragnar just as we were running out of fuel. Good luck there! I would like to think my meditation helped.

There were all kinds of different ships, but the pilot said he could only stop at two before he had to dock with the fuel ship to get fuel. He gave us two choices and we could get off wherever we wanted.

I picked to get off at the Battlestar Galactica because I figured there would be some hot fighter pilots there. Everybody else got off on the Olympic Carrier which is probably a nicer ship, but this is probably way more fun.

I've been on Galatica for a couple days now. I don't get to stay forever, but it's nice looking at all the hunks in their flightsuits and having some hot water to take a shower. None of the pilots have time to talk very much.

I did get to talk to one hunky guy named Lee, I think he was giving me the eye, but he's too busy. This totally blorp named Starbuck made a mean face at me and told me to, well, I'm not going to repeat it. It was bad. I think she has the hots for this Lee guy.

Oh, yeah, I also made a new friend. His name is Boxey and he is the most adorable little boy from Caprica. He used to live right near me in Delphi and he was on Caprica during the attack. He told me Delphi got bombed really bad. That made me sad, but then we played hide and seek and that was a whole lot of fun.

I hope I can stay here on Galactica for a long time, but they said I will have to leave pretty soon.

Bad day today, diary. I don't want to talk about it much because I am really feeling down right now.

Two bad things happened. First, I found out I have to leave Galactica tomorrow. I don't know where I'm going to go. I'm trying to get in touch with the pilot of the ship that brought me here, but it's really hard to find people.

I do sort of want to leave because we're not allowed to drink very much water right now and that means no hot showers. Plus the pilots are all doing things so what is the point of me being here, right? That's the way to look at it. Onward and upward, Heather. As long as I remember my mantra and keep positive everything will be fine. 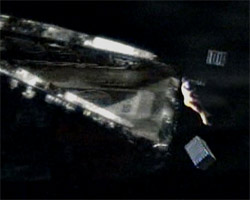 LOL whoops!The other bad thing is, remember that little boy I told you about? We got to be really good friends. I told him I had to leave and he was really sad. He said he wanted to come with me wherever I go, but I don't want to take care of a kid. It would be impossible to find any hot boys with a kid hanging around all the time.

So I told him he couldn't come with me and he got really sad. To get his mind off of it I said let's play hide and seek again. No, wait, I think it was his idea to play it. Yeah, it was definitely his idea, because I remember not wanting to and then I did it anyway because he really, really, really wanted to play hide and seek.

Boxey went to hide and I counted down and then I went looking for him. It took a really long time to find him because he hid in one of the external airlocks with the door closed. I could see him through the window and we both laughed a lot. He said I had to open the door and, diary, I don't know what happened. Shouldn't a red button mean open the door?

There was this wooshing sound and Boxey went flying up against the wall and it was like he was going to get smooshed going out this tiny crack. It looked like it hurt a lot, but luckily the door opened all the way and he was able to go through it to the outside of the ship.

The bad part is the door closed automatically a little bit later and he couldn't swim back to the ship in time.

I really hope no one notices that he is gone.