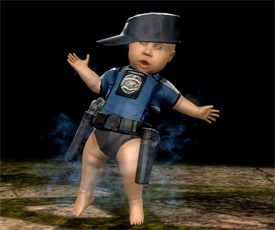 When you create a fighting competition in order to try to merge your realm into another realm and klaim the souls of all living humans you accept certain responsibilities.

You will be mindful of the environment; take nothing but memories from the acid pit and leave nothing but footprints on the howling bridge over the river of knives.

You will pay and feed all monks who stand around and watch fights or pray ominously near the fights.

You will maintain all swirling mystic portals and kreate a demon-gnawed ambiance of skulls, chains, and karcasses.

You will provide an announcer, a duty which I gladly take on myself to save money.

Those are all important responsibilities, but most sacred of all is the promise that after the fighting is over, after the piles of guts and femurs have been swept away, you will care for the babies.

Does that surprise you? Participants in a fighting kompetition never think about the babies. They don't train thinking about babies or plan for babies. But sometimes, at the end of a fight, through means even I don't entirely understand, there is a baby. Something has to be done with all the babies or, as I like to call them, "Shao Kahn's Little Miracles."

When I first started the tournaments I thought I could just toss the babies into lava or a khasm, but when you hold that baby in your arms you change. An evil egg cracks open to reveal a yolk of tenderness. 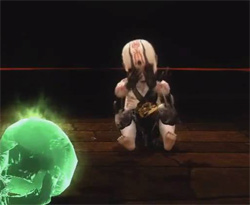 Fatherhood did not lessen my desire to Konquer Earthrealm and klaim all its souls, but when you are holding several babies in your arms you know the real weight of responsibility. Everything else becomes secondary.

It might not seem to make sense. I hated Liu Kang. I hated Sonya Blade. I was sort of indifferent to Scorpion and Sub-Zero. I barely even knew who Jax and Johnny Cage were. But when they're turned into babies and they're in your arms, looking up adoringly at your demonic skull mask, what can you be other than a loving parent?

So that is what I have become. My babies were totally defenseless. Outworld is not child proofed. It's 100% sharp objects, precipices and poisons. I couldn't just leave them to die so I ordered Shang Tsung, my sorcerer, to make at least part of the Outworld safe for the babies. He could put up gates to the spike pit and make it so they couldn't open the portals to the Netherrealm when I'm not watching them. He toned down the howling demons for me.

After he grudgingly obeyed, Shang Tsung said I should banish the babies to the Void by conjuring a Soulnado. For even suggesting such a thing I aged Shang Tsung 1,000 years and trapped him between worlds inside the Nexus. I hope he learns his lesson: nothing is more important to me than these babies.