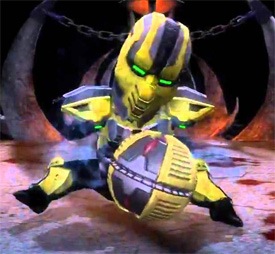 I have been focused on fatherhood since I first picked up a baby. I have not been without help.

To be honest, I don't think I could have managed without Prince Goro. Some of the dads I meet on play dates say they wish they had extra hands to deal with their little rascals. I tell them one of my babies is a robot so think about that for a second, but then I do have an extra set of hands thanks to Goro.

He is so good with the babies. So gentle and he loves to cuddle with them. He may have failed to defeat Liu Kang, but now he regularly defeats Liu Kang at nap time.

Fatherhood is quite the journey. I have been tested and I've also picked up a little wisdom along the way.


The precious moments of fatherhood just go by so fast. One minute they are crying on top of a beam over the acid pit and the next minute they are refusing to put on the veil to cover their hideous monster mouth before they go to high school. Treasure every moment you have with your children and love where they are in their lives. If you have raised them right they will choose to become kombatants and you might just get a second or third chance to raise them again. 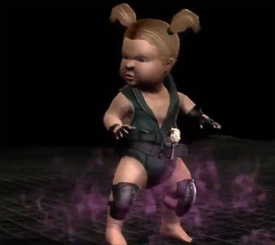 At first I tried to go it alone. I thought I knew best, after all, I am the supreme emperor of Outworld. It turns out I knew just about nothing. After some initial problems, like when I left the soul worm in charge of the kids while I went to the store or the time baby Kitana wound up on top of a bone ziggurat, I finally accepted that this wasn't going to be a FLAWLESS VICTORY! I decided to seek some advice. I konjured the souls of some of the greatest dads throughout history. It turns out, every dad had an adjustment period, you just have to believe in yourself and try not to destroy the puny, pathetic bodies of your children when they are being troublesome.

FEEL THE NURTURING OF SHAO KAHN!


Being a father means setting up routines and rules. I try to make sure my babies get plenty of superfoods and lots of DHA. As few plastics as possible in their toys and babas. No screens before sundown and no going to the Darkrealm with the iPad to get around that rule. I like to keep them social so I spend a lot of time disguised and going to tumble gym, wiggle tots sports, baby guppy swim aerobics, and Playrealm. Since these kids are growing up in Outworld I also want them to be familiar with the realm. Lots of trips to see the blood dinosaurs, howling ghosts, the torture chambers, and the place where my scientists do their kruelest experiments.

At some point, I know I will have to let these kids grow up and set out on their own so that I can get back to konquest. For now, I am enjoying being the ruler of the most important place of all: Father Realm.