When forums user Fat Lou invented The Subtext Game it was an instant hit. Everyone names a film and comes up with a random contextual theme to pretend to read into it. Then they all get jumbled up and everyone has to write an essay with a randomly assigned movie and theme. It's all in good fun and what follows are the three best entries into the best bullshitting contest around.

Hugo and the Righteousness of Capitalism

Objectivism spends much of its energy trying to explain the choices and the philosophy of the rational man. Since reality exists independent of human consciousness, Ayn Rand believed the best way to learn about it was through reason. The most rational man would realize his own self-interest and pursue those goals with other like-minded people through laissez-faire capitalism.

Hugo's world, behind the scenes of the Parisian train station, is one of enmeshed gears and clockwork. Few things in this world are more rational than gears- every piece has a purpose, every purpose has a piece. Complicated as the design may be, it ultimately boils down to logic, otherwise the machine would not work. In Atlas Shrugged, the trains ran thanks to the hard work of a number of prominent individuals. It is no coincidence that in Hugo, the train station relies on this hidden network of gears, unnoticed and unappreciated by the passersby. They would, however, certainly notice if it suddenly left, as occurs in Rand's magnum opus. Such a simple parallel to Atlas Shrugged, however, would be below the expectations set for a filmmaker like Martin Scorsese. What Scorsese presents in Hugo is a subversive tale of Objectivism, told through a scathing criticism of film disguised as heartfelt appreciation. 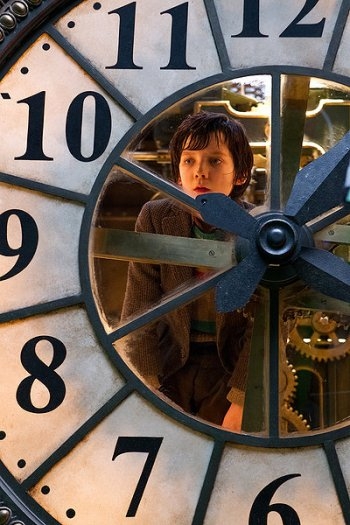 We've featured this film three times now, so enjoy these same screenshots again.The indisputable villain of the piece, Hugo fits the description of one of Rand's parasites almost perfectly. While his father lived, Hugo merely went to school, refusing to work and leeching off the fruits of his father's labor. After his father's death, Hugo's uncle Claude forces him into working in the train station, much to Hugo's protests. If Hugo had his way, he would continue with his studies, offering nothing to the family but a drain on Claude's resources.

After Claude's disappearance, Hugo continues to live within the train station, fixing the clocks. The very first action we see him take is to spy on a bored-looking shopkeeper. As the shopkeeper dozes off, Hugo sneaks out and tries to steal a wind-up mouse from his counter. As he is caught, the shopkeeper, Papa Georges as we will come to call him, exposits that Hugo has been stealing pieces from him for quite some time now, and forces him to empty his pockets. Hugo reveals a treasure trove of mechanical parts in one pocket, and a small journal in the other. Papa Georges takes the notebook, and departs for home, threatening to burn it. Hugo follows him home and meets his orphaned goddaughter Isabelle, who swears not to let Papa Georges burn the notebook. Hugo moans about the loss of his notebook to anyone who will listen, not once mentioning that it is entirely his father's work.

The irony here is obvious. Hugo regularly steals things created through the hard work of others, but is reduced to tears at the theft of an object that he did not work for. A petulant child at best and a parasite at worst, this hardly seems a character worthy of our sympathy. Inspector Gustave, meanwhile, is a wounded veteran who has returned to Paris and entered into law enforcement, trying his hardest to prevent theft in the train station despite his injuries. In any other film, such a character would be considered noble, but not in Hugo. The film indulges so much in poking fun at his injury and his character, it is difficult to not feel guilty. Such a portrayal of a man so profoundly affected by war should go against everything we have been taught. Scorsese has turned upside-down all proper notions of good and evil, but reveals his true intentions through his excess. Any time but modern day, someone who spends the entire movie antagonizing small businesses would be clearly a villain, apart from Obama obviously.

Hugo's entire world is gears: He lives among them and fixes them. In an ideal world, he would be as rational as them, or at the very least rational enough to properly understand them. However, it is made clear that Hugo is talented but imperfect without his notebook. This is particularly disastrous for Hugo's goal of fixing the automaton, a mechanical man found by his father. The automaton is a marvel to behold, a man literally made of gears, nothing but pure rationality.

Satirizing the common attack that Objectivists lack empathy, Scorsese shows that the one thing preventing the automaton from being operational is the one missing piece, a heart-shaped key. Objectivism held that love was an important part of life, but you could not give it out willy-nilly. Love should only be felt toward someone of admirable character. Love is to be earned and cherished. The heart of a rational man falling into the wrong hands would be disastrous, as Scorsese demonstrates. Hugo notices the key around the neck of a friend, fellow orphan and goddaughter of Papa Georges, Isabelle, and piques her curiosity enough to convince her to relinquish it. The result of this mistake is immeasurable, as Hugo, driven by nothing more than selfish curiosity, is absolutely the worst person with whom to make this mistake. 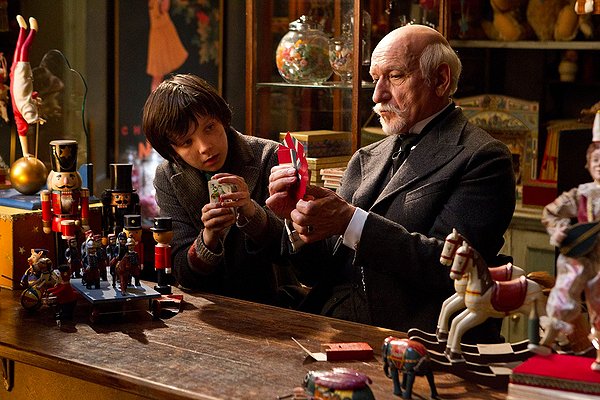 Go on, Hugo, ask him who John Galt is.

Hugo actively reveals that he is a terrible person to trust with this secret immediately before turning the key. "I know it's silly," he says "but I think it's going to be a message from my father." Hugo cares more about what he can get out of the automaton than what it actually has to say. Stuttering long enough to break Hugo's heart, the automaton delivers its message. This message, one created by a slip in love's rationality, is a sketch of the famous shot of the rocket lodged in the eye of the moon from Le Voyage dans la Lune, an image of pure fantasy and science fiction. "George Méliès," the automaton signs with a flourish, kick-starting an unfortunate chain of events. Isabelle recognizes the name as that of Papa Georges, and they return to her home to learn more.

What they uncover is a hidden cache of impossibly fantastical drawings. This discovery reduces Méliès to tears. The children, heading to the library to learn more about Méliès, find a book that says he died in the Great War. The author, Tabard, materializes behind them and denies their allegations that he lives on. He asks why he should believe them, and they come up with nothing better than "because it's true!" That's the way the world is. No sentence they can speak, no proof they can offer will make him any more alive or dead.

Fantasy plays a destructive role throughout Hugo, and is vital in getting across its message. The purpose of film, both then and today, has been a respite from reality, a brief foray into a human-created reality not bound by the real world. Objectivism holds no issue with art, but Rand remained staunchly loyal to romantic realism, presenting the way the world is or should be. The fantasy genre preferred by Hugo, however, is quite far from realism and it rightfully tears people apart in the film.

In a flashback to his directing days, Méliès exclaims: "if you've ever wondered where your dreams come from, you look around! This is where they're made!" This line is quite important, as little more than ten minutes later there are exactly two actual dreams shown, the only two in the film. Both are terrifying nightmares that leave Hugo bolting awake in the dark, drenched in sweat. For all his pride in his fantasy films, the dreams Méliès creates are not ones a rational man would want. The film wants us to recognize two discrete versions of Méliès, the director and magician before the events of the film, and the wary capitalist, rejecting Hugo's thievery and fantastical ambitions we are first introduced to. In an additional jab at Méliès the director, Scorsese showcases his past as an illusionist. Could any profession be more opposed to the idea of reality being independent of human perception than that of an illusionist? His turnabout into a man earning an honest wage is admirable. 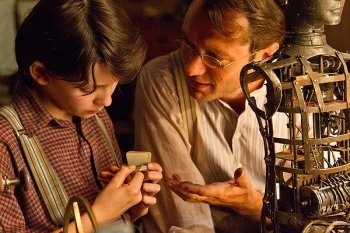 Give that back, son. You didn't build that.Hugo and Isabelle bring Tabard to the home of Méliès with a copy of Le Voyage dans la Lune. Viewing the film finishes for Méliès what uncovering the illustrations started. He reveals how much he loved making fantasy films. The Great War was what awoke Méliès from his fantasy-induced stupor. "The soldiers, having seen so much of reality, were bored by my films," he mopes. Capitalism has delivered a cold message to Méliès: There is no room for an illusionist in a world of soldiers, awoken to their own mortality.

It is the very heart of objectivism that recognition of mortality is required for morality. A man awoken to his own mortality is a man who can act best in his own self-interest, and with the Great War being a shock to the system for so many young lives; it seems only natural that morality as well would turn against fantasy. The world needed to awaken to its objective reality. Thanks to the detrimental effect of viewing his own fantasy film, however, he decides to take the spotlight once more. Damn the world and the proficiency of capitalism, all for the praise of a medium-sized auditorium full of people.

In Atlas Shrugged, John Galt realized his successes were being taken advantage of by the riffraff. Fittingly, he disappears, taking the fruits of his success with him. The film looks at this story through a funhouse mirror. Méliès has earned his success through fantasy and trickery, neither very noble pursuits. Thus when he disappears, the "Film Academy," his own version of Galt's parasites, wail and gnash their teeth, but are ultimately freed from fantasy's evil influence. Tabard publishes a book on film, which the movie suggests has sold reasonably well. He, like Méliès, has made the best of a bad situation by seeing the light of free-market capitalism. Méliès, unlike Galt, returns to the embrace of his parasites, for no more reward than the glory of the spotlight. The film, so corrupted by Hugo's influence, rejects the capitalist spirit for a sense of fantasy and wonder created by a charlatan. Scorsese takes Atlas Shrugged and turns its narrative structure inside out, while leaving its central message intact. With this twist on the old narrative, he is able to introduce a dark projection of where we are headed: a world consumed by fantasy films and getting further from the real goals of rationality and capitalism.