Cemetery Man is a modern fable for the trans community and beyond, in which an Italian trans person's struggle in an isolated community leads to disastrous consequences. This assertion is based upon a number of observations which, combined, point to the idea that the film was intended as a call for solidarity to the fledgling Italian trans community, and to warn of the dangers of dealing with gender dysphoria alone.

Before we can further address issues concerning Transgenderim in Cemetery Man, we must first clarify the language surrounding the topic. 'Transgender' is an umbrella term that includes transgressions of normative gender or sex, be it mentally, socially or medically. 'Transgenderism' is a broad term that can refer both to the social movement affirming transgender pride, as well as being synonymous with gender dysphoria, a condition in which a person feels a disparity between the biological sex assigned to them at birth and their internal gender identity. "Cis" simply means not-trans. Note that due to the controversy surrounding the terms Transgender and Transsexual, "Trans" will be used instead. 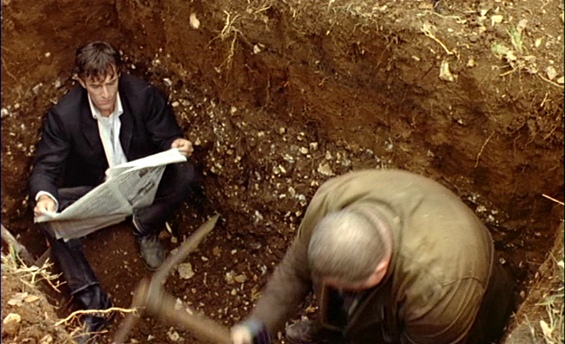 Are you going to do any work, Rupert?

The principle character of this tale is Franco, a beleaguered bureaucrat in the small Italian town of Buffalora. The film we see is an exploration of Franco's psyche, which is dipping in and out of an iodine-induced coma following an attempted murder-suicide. The audience learns of this over the course of the film through Franco's escapist self-insert Francesco Dellamorte, whose escapades were originally fabricated to distract Franco from a soul-crushing workplace dominated by never-ending toil. However, it quickly becomes evident through the increasingly surreal nature of the film that the seemingly typical cis-male fantasy is permeated with anxieties surrounding gender identity, which lead us to question whether Francesco really represents Franco's true desires or whether he is a symbol of internal repression.

We explore this mental anguish through Franco's imagination, and it is through this curtain that the audience bears witness to Franco's condition. Stereotypical cis- and transperson fantasies mix and blend as the audience is left to work out the boundaries between fantasy and reality. By the end of the film it becomes evident that Franco's struggle with gender dysphoria, combined with depression and isolation from education and a larger cultural identity, has led to the murders of Franco's wife Mara and their daughter Cinzia- at Franco's hands.

At first glance, ''Francesco'' Dellamorte appears to be the product of stereotypically male escapism, but also a product of a particularly isolated individual with low self-esteem. Francesco destroys waves of "Returners" night after night with a phallic gun that never needs reloading- an object of male potency that Francesco keeps close by when dealing with strangers at the door. Francesco also appears to compensate for something by insisting on being called a "Watchman," a gendered job title to go with the gendered title translation, "Cemetery Man". Equal part self-insert and imaginary friend, Franco ''talks'' to Francesco by telephone, unable to convince anyone else of the undead menace. Francesco is bound by bureaucracy, trapped in a similar Sisyphean cycle as Franco, though bound by a broader sense of duty mixed with apathy. In this scenario Franco's solitude is justified somewhat; those who try to contact Francesco are either trying to devour the living, or mock Francesco in some fashion.

Francesco to a certain extent embodies Franco's anxieties about coming out to Mara, Cinzia, and the cis community. This can be clearly seen by a recurring plot thread in the narrative of Francesco, who is constantly mocked for being 'impotent,' which soon reveals itself to be a metaphor for being trans in some way. This is evident from how the varieties of cis characters in the film regard this supposed impotency, eventually hinting that Francesco is transitioning or at least open to some extent. Marshall Straniero lets Francesco off of charges of rape due to the latter's perceived impotency, which would not matter in an actual rape case. Francesco is also antagonistic toward Doctor Verseci, who does not take Francesco's condition seriously, saying that there are other people with "good, honest diseases."

The mention of pills also seems to trigger Francesco, instantly instilling anger. Francesco is also referred to as an "Engineer" by cis elder authority figures, even when asked not to do so, even though all those who refer to Francesco in this way are aware of Francesco's actual occupation. This mirrors the stubborn and purposeful misuse of pronouns that those of cis privilege sometimes use regarding trans people, even after being informed of the individual's preferred term. 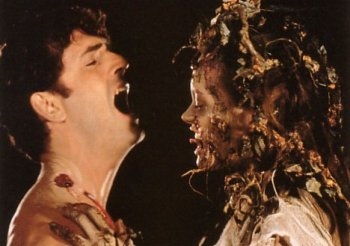 God, that's hot!Franco's real problem stems from a lack of education, both generally and regarding issues with gender. Admitting to be a high-school dropout and lying about having a degree in biology, Franco's only real experience with reading is with the phone books, which were obsessively read from cover to cover in a search for an outlet. However, due to a lack of knowledge regarding Transgenderism, and the lack of overt pride affirmation by the Transgenderism movement at the time, Francesco's search is futile. Franco's life spent entirely in Buffoloa leads to the question whether "The rest of the world really exists." Franco has no idea about what gender reassignment surgery is actually like, imagining giant penis-chopping pliers and huge syringes full of sterilization drugs; not knowing that less than half of trans people have any kind of surgical intervention. Francesco would not be a cross-wearing Catholic had Franco known of the current stance of the Church against trans individuals.

This lack of education about trans issues can further be seen with the character of Gnaghi. Having only experienced a cis dominated media, and without an obvious trans community in which to confide, Franco's limited knowledge of the broader gender spectrum is drenched with sensationalism and exaggeration. In this manner Gnaghi embodies a variety of stereotypes surrounding trans people. Gnaghi is dehumanized by others, being referred to as "It" by children and "Cutie" by the elderly. Gnaghi is also portrayed as being mentally unsound, having problems coping with emotions.

Sexually, Gnaghi is shown to be perverse, but in an ''innocent'," childlike fashion. He's disgusted by consexual sex between two peers, but he has no problems trying to foster a romantic relationship with both the young and the dead, even "Taking advantage" of a young returner's decapitated head, kissing and later attempting to marry her. Though obviously these traits are massively exaggerated, to Franco, who lives in an isolated community before the age of the internet, these fears of being seen as a mentally ill deviant for not being cis-gender are always not far behind. Indeed, this is why Gnaghi is a constant assistant of Francesco, but is not regarded by the latter as a "friend", who only has eyes for Franco. Franco's ignorance of even the most basic of trans issues means that there is great difficulty in separating fact from fiction for very long.

Indeed, a small part of Franco wishes nothing more than to cease all outreach efforts and hope for a divorce to come naturally, allowing Franco "To see what the rest of the world looks like." However, Franco loves Mara too much for that to happen. As such, Francesco falls in love with a variety of women who all take on Mara's form; credited only as "She." These women fit cis-male sex fantasies; the rich young widow who needs love, the sexy secretary and university students in need of a lift. However, Franco's iodised mind blends these gender- normative encounters with Franco's gender issues, resulting in encounters that are a synthesis of his escapism and denial.

To a certain extent, Franco subconsciously recognises this. Even while making love, the gender roles of Francesco and She are blurred somewhat; no primary genitals are shown, Francesco appears to gain pleasure from pectoral sucking, and sexual acts are kept ambiguous, to the extent that it is left unsure as to whether Franco is projecting on Francesco, She, or both of the lovers. However, in Francesco's first sexual encounter with "She," the lovers are surrounded by ignis faatus. These creatures are metaphorically representative of a goal that is impossible to reach.

Francesco goes to amazing lengths to be with She, only for each relationship to break up in contrived ways that become increasingly dark as the film continues; evidence that Franco indeed loves Mara, but is terrified of the consequences of coming out. She's final incarnation, who meets Francesco after Franco has finally snapped, is quickly burnt to death when Francesco finds out that She is a prostitute; evidence that Franco has found a solution for the marriage problem. Lying in a hospital bed, wishing death upon the life-saving staff, Franco finally rejects Francesco. In one last futile fantasy, Franco imagines packing everything up and leaving Buffalora for the rest of the world, but realises in horror that "It's beyond imagination." Feeling that there is no way to change the current state of affairs, Franco finally concedes that trying to repress how one really feels inside is madness, as Francesco cackles like Gnaghi.