EXPECTATIONS: Found-footage horror films have a tricky line to toe: How much horrific shit must happen before amateur filmmakers drop their gear and run for the hills? Enter the mockumentary, which manages to stretch our suspension of disbelief just a little bit further by providing a reason for these jokesters to keep filming: They're professionals. Based on that, and my fascination with conspiracy theories and the people who love them, I'm pretty excited for The Conspiracy, even while direct-to-VOD films are more miss than hit.

REALITY: In the dregs of a disappointing summer, with only a couple solid films at the multiplex, The Conspiracy is a nice reminder that the freshest films come from underneath, from where we least expect them. In search of a film to review, I picked The Conspiracy more or less at random from Amazon's VOD offerings. As a "documentary" that recaps some of the more pervasive conspiracy theories of our era before it evolves into an effective slow-burn horror flick, The Conspiracy is a two-fer. Its structure is none too original -- essentially, it's The Last Exorcism all over again, with different nouns and reapportioned "skeptics are skeptical" and "oh god our worst nightmares are coming true" acts -- but The Conspiracy knows what it's doing, hits the beats running and never gives us a chance to think too hard about the particulars.

That's always a plus for any film that straddles the line between fiction and non. Taking a cue from The Blair Witch Project, the documentarians in The Conspiracy are named after the film's actors: Aaron (Aaron Poole) and Jim (James Gilbert). Some of their subjects are real people. Their most important subject, Terrance (Alan C. Peterson), is fake. Footage of planes crashing into the World Trade Center is real, as is the Zapruder film. To the best of my knowledge, the YouTube videos of Terrance ranting on street corners aren't. Most of the conspiracy theories Terrance recites sound familiar, and he enthusiastically name-checks real world leaders, secret societies and historical events. Of course, he also name-checks at least one fictional entity before he promptly disappears, leaving Aaron and Jim to figure out which of his conspiracy theories was accurate enough to alert the ever-watching "they" to Terrance's existence. 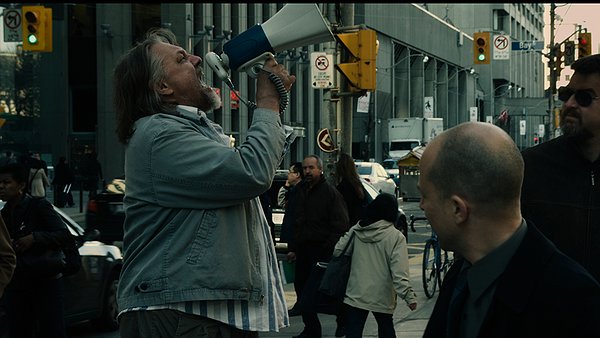 I suppose we're at the point that real footage of 9/11, in service of a fictional story that has little to do with 9/11 itself, isn't going to stir much controversy. Here, it bolsters the film's internal reality, in which nothing is sacred, corpses are the wages in the New World Order, black SUVs become a fact in your rearview if you scrape too close to the truth and the same bicyclist, head-to-toe in gray Lycra day after day, pedals away just when you notice him. Not that I buy much of the bullshit Terrance is selling, but The Conspiracy wouldn't be half as good on the mockumentary end if writer/director Christopher MacBride didn't ground this film in the materials of history and the manic connections of secret history -- or if he cut corners. What's most surprising is that The Conspiracy, made for $1.2 million Canadian, could pass as a real documentary, unlike many of its counterparts (Lake Mungo and The Poughkeepsie Tapes), which are frequently spoiled by reenactments and interviews with subjects essayed by actors who couldn't land a job on television.

MacBride wisely chooses to build The Conspiracy, at least initially, around a strong performance from Peterson. Terrance is equal parts charismatic and unstable, likable and antagonistic. He takes to the streets with a megaphone to call passersby "sheeple." He's convinced that cyclist is following him. He lives in an apartment wallpapered with news clippings, and his first instinct is to apologize to the documentarians for the mess. It's a nice touch. And even if the central dynamic between Aaron, jolted into obsessive belief by Terrance's disappearance, and Jim, the skeptic who is nonetheless concerned for his family's safety if Terrance was right, is a little shopworn, Poole and Gilbert play their roles well. So do their subjects, the talking heads who are never given enough screen time to reveal their shortcomings. 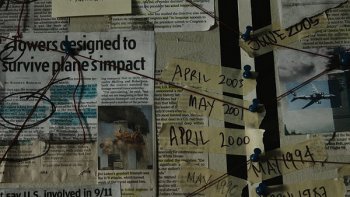 My attempts at scrapbooking never turned out very good either.If the first half proved MacBride could make a convincing documentary, the second, in which our intrepid documentarians attempt to infiltrate a secret society while wearing hidden cameras, affords cinematographer Ian Anderson and costume designer Megan Oppenheimer their time to shine. With low-res cameras in a low-light setting, his subjects' faces blurred in a nod to COPS-style anonymity, Anderson finds the eerie beauty in night shooting and simulated grain. Oppenheimer's contributions ratchet up The Conspiracy's surreal tension in its final scenes. I haven't seen a film so artfully derivative of the look and feel of '70s and '80s horror since Martha Marcy May Marlene or, I don't know, The House of the Devil.

Unfortunately, that's where The Conspiracy also reveals itself as a bit of a letdown, with an ending that doesn't quite deliver on the film's promise. Yes, there's a twist. Yes, it's kind of a cop-out, the sort of twist that will lower the stakes in a second viewing -- the kind of twist I'd excise if I ever start churning out fan edits of flawed films from my mother's basement. Otherwise, The Conspiracy is an enjoyable horror flick that, to borrow the cliche, is more about the journey than the destination. You'll probably predict the mockumentarians' fates before they do, mainly because found-footage horror allows for only a handful of different endings, but it's fun to watch the film unspool and, at least for a while, forget to wonder why they just won't put the fucking camera down.

MINORITY REPORT: So you're telling me if I go down to any street corner in America and start shouting off Wikipedia's list of popular conspiracy theories, eventually I'll say the magic word and get dragged off by suits? Actually, yeah, that sounds about right. - Joseph "Jay Dub" Wade