EXPECTATIONS: Is this seriously the only movie Zoe Saldana shows up in this year? This must be like a vacation for her, after it seemed like she was the go-to action girl in the theater every third week last year. Well, that's cool, at least she'll get to play the original and creative character of... angry female assassin out for revenge. Written by Luc Besson. ...So was everyone just sleepwalking through this production, or what?

REALITY: Remember how I was just complaining that Don't Be Afraid of Dark is a film acting as though it were directed by its writer? Colombiana has the same problem in a different manner. It doesn't matter that the name on the credits is Olivier Megatron; this is clearly a Luc Besson movie through and through. But it's not a good Luc Besson movie, and that is the problem. Did you like the unusual-yet-touching relationship in Leon: The Professional? Well, it's not as well executed in Colombiana. Did you like the fight scenes in Taken? Well, they're downright terrible in Colombiana. Did you like The Fifth Element? ...This is nothing like The Fifth Element. This is La Femme Nikita as seen through the eyes of Oliver Starscream, who is most famous for ruining a franchise based solely around Jason Statham driving and kicking things. 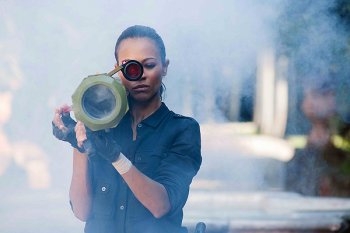 I seem to remember a similar image when we reviewed The Losers.The opening scenes of Colombiana, set in Bogata circa 1992, introduce us to Cataleya Restrepo (Zoe Saldana; younger version played by Amandla Stenberg), a twelve-year-old girl whose father is a drug lord, or something, maybe? She watches her mother and father be murdered at the hands of Don Julio, a rival gang lord who is after an SD Card (which didn't exist back then) containing information of some sort that is never explained. In fact, it is never mentioned again after the first scene.


Cataleya makes her way to Chicago by outrunning gang members and outsmarting Federal Agents. She is able to do this, of course, because Luc Besson believes that there is a cold-hearted assassin in every 12-year-old girl, because Luc Besson has never watched the Disney Channel. Once in Chicago, she goes to live with her gangster uncle and asks to be trained in the art of killing. These are probably the best scenes of the movie. Once she grows up, everything goes to hell. As a note, the movie makes a huge point out of Cataleya's love of the show Xena: Warrior Princess. In five minutes, she is shown reading a Xena comic book, drawing Xena and saying "I wanted to be like Xena." Xena would not be on TV for another three years. Is this a ridiculously nerdy nitpick? Yes, but it's relevant because it reveals one of this film's many flaws: Luc Besson and Olly-Olly Optimus just don't care.

There's a certain amount of suspension of disbelief I'm willing to allow for in movies, particularly action flicks. When Cataleya goes on her revenge-inspired killing spree, I'm willing to allow for the possibility that she has the ability to swim between sharks unnoticed, or that there is always, always a well-lit air vent leading exactly where she needs to go. After a time though, the script just asks us to accept certain leaps that are overly far-fetched, even by Luc Besson's standards. For example, Cataleya's tertiary antagonist, FBI agent Ross (Lennie James), is apparently so well-connected that his computer gives him an instant message every time any photo is added to any police database ever. Despite this, the man never does any actual police work to find Cataleya; he stumbles across her information by a series of freak coincidences, and then she comes to his house. This is not Tommy Lee Jones in The Fugitive that we're dealing with here.


This leads us to another problem. There is literally no explanation given for how Cataleya knows any of the things she does, yet she's able to locate the office of a high-ranking CIA agent and set up a sniper position on him in a matter of hours. Again there's a suspension of disbelief, but then the movie adds in a completely pointless scene where Cataleya threatens a city official to get blueprints to the bad guy's house. Ironically, this detail is so unimportant that I would have been completely willing to let it pass. Instead, their arbitrary decision to give us back-story in this particular case throws everything else into question. 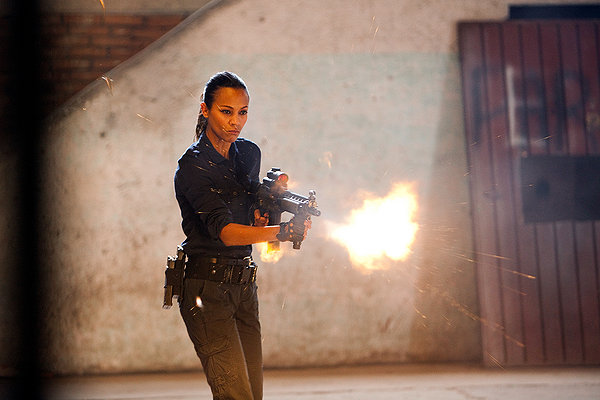 I swear, the only publicity images from this film are of Zoe Saldana firing weapons. They know their target audience, I guess.


This brings us to one of the primary problems with the film. The opening credits detail no less than six different production companies putting money into this thing, and I have to figure that at least one of them wanted to move production along. As a result, the movie feels strangely incomplete. Characters are introduced in two lines before they're killed off, and we're supposed to assume that they were important somehow. The FBI agent's lead runs cold until one lone janitor passing by happens to know the name of one of the rarest flowers in the world. There's a plot about Cataleya trying to have a normal life with a boring artist boyfriend that goes nowhere, and the pacing is so odd that there is basically no buildup to the movie's climax. All of a sudden, Cataleya's shooting rockets and we're left thinking "Oh, apparently the movie's ending!" What follows is a terribly filmed fight scene, evidence that Oxford Cheetara may be able to copy Besson, but apparently learned nothing from his movies. There is a cutaway literally every time a punch lands. This is not just shaky-cam. This is Parkinson's-Cam.

Colombiana (There is no reason given for the movie to be named this, by the way) is not a very good movie, but it did leave me with an interesting question: What happened to the solo female action character? The '80s gave us Sarah Connor and Ripley, yet since Terminator 2, there's only a handful of true action movies with well-developed female leads. At worst, action women are still thinly disguised sex fantasies, and at best, they're secondary to the male lead, able to kick just enough ass to still have to be rescued. (And at the absolute worst, they're Resident Evil characters.)


Cataleya is none of those things. At no point does she use her sex as a tool to get what she wants, and she's restrained from being solely eye candy, even when she's pretending to be a drunk hooker. There's actually some interesting insight into her character when she reveals she's willing to harm an innocent man's family in order to get the revenge she needs. Cataleya's characterization is interesting in that the film would have been incredibly similar had the character been male. In fact, she would basically be The Punisher. (And the hooker scene would have been much more interesting.) Saldana's performance doesn't add much, but it works for what little she's got to go with. Cataleya, while not an original character, is still an interesting and compelling one. She deserved a better movie.

MINORITY REPORT: I'm convinced the only reason Luc Besson wrote this movie was to remind Joss Whedon where he got the idea for his "female empowerment through violence" shtick. - Joseph "Jay Dub" Wade