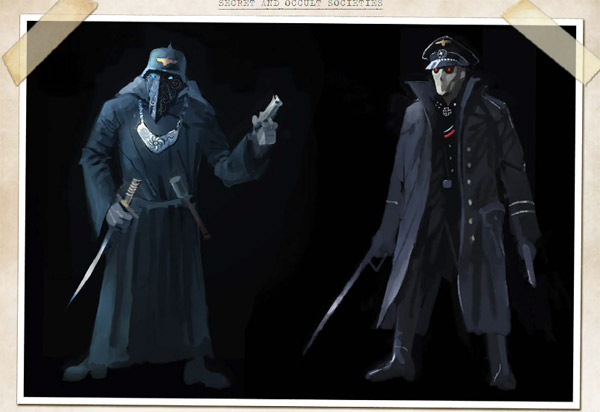 Zack: Walt shoots him several times and he collapses back against the wall. Blood soaks his shirt. As he dies, the knife falls from his fingers and clatters onto the floor. It seems like a dagger of some sort.

Steve: Checking the dagger and the briefcase.

Zack: The dagger is emblazoned with a symbol on the pommel that is like a sawblade incorporated into a wolf's paw with an eye in the center of the blade.

Zack: The briefcase is difficult to get open. It seems locked.

Steve: Pry it open somehow. I don't want to blow it up if there is a bomb inside.

Zack: Gags thinks he can open it. While he's prying it open, the tavernkeeper and his wife come out of the back and are like, "What have you done?! They will know. They will know!"

Steve: Betty is all, "Who will know? Who is they?"

Zack: The wife screams, "NACHTWÖLFE!" and runs from the room. The man gives you a last agonized look and chases after her to calm her down.

Steve: What about the briefcase?

Zack: You get it open and it seems to be some sort of armored carrying case. In a dozen chambers are finger-sized blue crystals that give off a very faint glow.

Steve: Great. The one thing worse than a haunted mansion. One full of magic crystals.

Zack: You don't know they're magic.

Steve: Is this going to be another radioactive ghouls scenario? Are you really going to make me fight ghouls again?

Zack: Find out, NEXT TIIIIIIME!