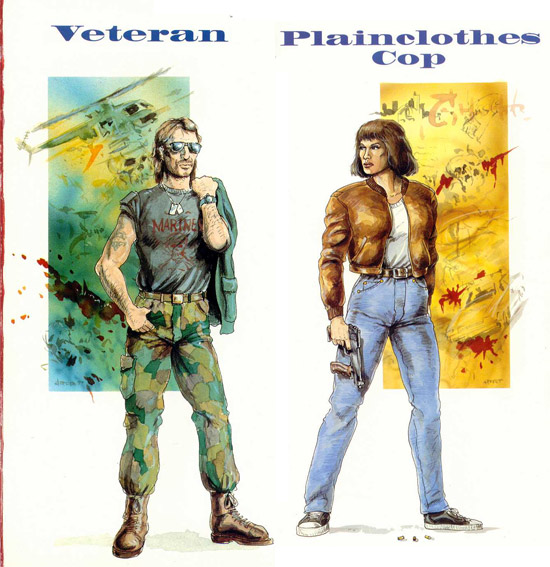 Zack: Before we get to bloody boob I want to point out that the one exception to the sinister red artwork you're going to be seeing a lot of in this article were the character class illustrations.

Steve: Every book had these in the 1990s even if they weren't always in color.

Zack: The goofy character classes in Kult almost ruin the otherwise mysterious and sinister atmosphere. They include classes ranging from "Student" and "Artist" to "Secret Agent" and "Mad Scientist." I am pretty sure, almost as an afterthought, you could also play a mythological monster like a vampire or werewolf.

Steve: Of course a vampire or werewolf can also have a class.

Zack: No, I'm pretty sure that's the institution where they teach football players to beat the shit out of their families.

Zack: There's nothing plain about her clothes.

Zack: Also, the veteran appears to be haunted by visions of war and death and the lady cop just thinks about piss and blood.

Steve: Yeah, I guess it does, but it's not actually amazing.