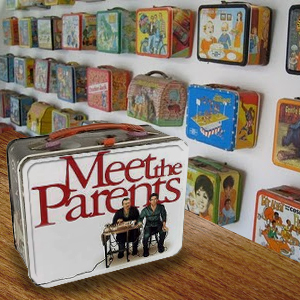 BOB: It's hard to tell which pop culture will stand the test of time. No one would have ever guessed that a little B movie called Star Wars would turn a skinny, flannel-wearing man into a fat, flannel-wearing man with unchecked power and a beard that kindly reminds you where his face ends and neck begins. So, needless to say, we were shocked when we discovered that future generations have abandoned Star Wars in favor of a new classic trilogy: Meet the Parents.

Characters and catchphrases adorn t-shirts, lunch boxes, and helper robots, while the future Kevin Smiths of the world film movies which feature cyber-clerks in their techno e-stores grumbling about the minutiae of Jay Roach's classic hat trick of reliable comedy. We are currently trying to figure out if we can get this time machine to go backwards far enough to prevent his birth.

JOSH: Having watched the Parents prequels, I don't necessarily think I can find justification in homicide or even infanticide for that matter.

BOB: All I know is that long-time fans of the franchise have been annoyed by the various changes to the original trilogy. For example, the first film now has 30 minutes of fart sounds added randomly to the soundtrack, and every male character has been digitally given a perpetual hard-on for the entire running time.

JOSH: On the flip side of the coin, my eyes being constantly transfixed on digital boners helped to distract me from Owen Wilson's face

BOB: Some say the origin story of the Fockers must be told. I say, let's leave their grand tale where it belongs... our imaginations.

JOSH: I'm going to have to disagree with you on this one. I found these new creations to be a far more cohesive string of humorous narratives than the originals. I would even say they're better movies overall, if it weren't for the bizarre casting decisions.

BOB: I disagree. Justin Bieber III makes for a fine young DeNiro, but the epic tale of his family's struggle to make it in late 19th Century America is undercut by the multiple scenes him loading a fish wagon for upwards of 20 minutes.

JOSH: Fair enough - I can grant Bieber a pass on this one. But I'm particularly upset with the casting of Vin Diesel as his father, Jimmy Byrnes. I can appreciate when a director includes in-jokes for the audience; I'm a sucker for fan service. But to have Diesel enter literally every scene surrounded by an array of constant explosions was a bit much. Your action film days are over old man. Hit the showers.

BOB: Especially since he's almost one-hundred years old and missing all but one arm. But, to the film's credit, we were handed a promotional bag of hardcore opiates for the screening, as they are now legal in the future. Which makes The Parents my favorite movie of all time.

JOSH: I'm glad you see it that way, Bob. Transversely, I'm currently locked in an explosion and CG Boner -riddled nightmare from which I may never wake.

BOB: We'll have to agree to disagree on this one.