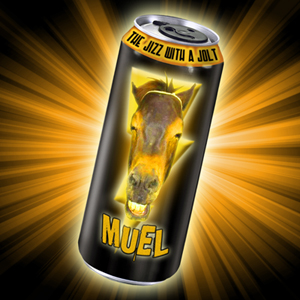 BOB: Being the horrible result of confused horse-on-donkey sex, mules are granted the gift of sterility by a generous god who wishes only for a world where these creatures cannot prosper. So obviously, mule semen is completely useless, right? WRONG! Leave it to those guys in the future to discover that mule semen actually makes for a very nutritious and energy-packed additive; this fact was unearthed when a local farmer was seen uprooting trees with his bare hands. When asked how he achieved such a peak physical condition, the man admitted to his shameful ways. Both beasts were put down later that day.

But for their sacrifice, the future now contains a vast line of highly-effective energy drinks, labeled and organized based on their mule semen concentration. To be honest, anything greater than 20% is like chugging marmalade.

JOSH: And just when I thought I had tapped the full potential of mule ejaculate...

BOB: I have to say that if you're not used to energy drinks from the present, you should stay away from the mule-based ones of the future. This one called "Mule Kick" doesn't lie; I've already lost several teeth and needed a major kidney operation, and I only got through half a can! Though it still tastes better than Red Bull.

BOB: You may want to check your math on that. Besides, you really shouldn't ingest so much mule semen. After you drank those four cans, you went on a PCP-style rampage and killed the four policemen who tried to bring you down. Lucky for you I went back in time to cut the break lines on their cruiser, because I wasn't about to be an accessory to murder.

JOSH: Whatever you say, Bob. I'm so hopped up on mule spurts right now that the rules of basic math no longer apply. I'm ready to go kite surfing.

BOB: I still don't know how you can even get past the flavor... This one's called "mango madness" but it tastes like there's a county fair in my mouth. And rodeo clowns are shitting on my tongue.

JOSH: You gotta just grit your teeth and fight through it. That's just the pulp you're tasting. It's packed with protein and concentrated energy.

BOB: I think these clowns are sick.