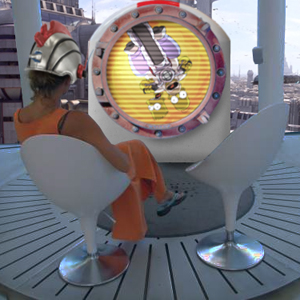 BOB: In the year 2011, former fans of The Simpsons are tormented by seeing their once-great show make desperate grasps at relevancy with strange publicity stunts like reanimating the opening titles to a Ke$ha song, and rubbing a Mr. Burns puppet on Katy Perry's crotch. And in 2055, things haven't changed much, aside from the production of the show, which is now written and directed entirely by computers that became self-aware in 2033. These episodes no longer use prepositions or include the color green, and mostly involve plot lines about the allocation of RAM, but everyone from the future agrees that these years have been much funnier than seasons 10 to 43.

JOSH: As much as I hate to admit this Bob, I haven't watched an episode of The Simpsons since season eight. Has the theme song always been one continuous high-pitched synthesizer note? My eyes have been bleeding for well over an hour now. I might just be coming down from my mule semen extravaganza.

BOB: Yes, the sentient CPU who now runs The Simpsons has made it so the opening theme now forces viewers into a mild catatonic state. It's much easier to absorb the jokes that way.

JOSH: It definitely made the persistently shrieking skeletons in each scene more bearable.

BOB: Well, to be fair, the show was forced to add those characters by the FCC so that the new skeleton population of the world would be accurately represented by popular media.

JOSH: I hate the future. And I also hate how all of the main voice actors have been replaced by Yeardley Smith.

BOB: Well, she's the only living original cast member, but her work ethic has really changed since she's entered her 90s. Now all of the characters sound like Grandma Lisa Simpsons, and the fact that she lost her tongue to cancer doesn't do her performance any favors.

JOSH: I agree. So while we were watching this episode I picked up this week's issue of HD3TV Guide and was reading how each week, the sentient computer chooses a random celebrity to fill on for the voice of Homer Simpson. Did you catch that?

BOB: Yeah, apparently for three years most of them were Chinese and spoke all of their lines phonetically.

JOSH: "You dishonor our clan with much shameful prank."

Of note to our readers, the rules regarding censorship have certainly eased up in the future. For evidence, I submit the introduction of Bart's cousin "Fuck Simpson "to the show. There's also a new neighbor named "Shithouse."

BOB: Well, I'll tell you how I feel about Future Simpsons, in the words of Bart himself: "Suck diseased horse cocks in Satan's asshole, man."

JOSH: Spoken just like a tongueless geriatric cancer victim with no discernible talent.

I hate the future.

Special thanks to Ian at Fused Muse for providing us with all of those awesome pictures!