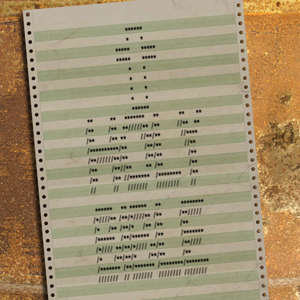 JOSH: The Holy Bible was, for the longest time, the most widely circulated and read piece of fiction in existence. Perhaps if Jesus had adopted a greasy hairstyle and fought off werewolves he might not be losing so much ground to the Twilight series. Part of the reason that both the Old and New Testaments have tapered off in readership is that the material is old... dated, if you will. Fans of fictional literature can only read about bizarre liquid transformation parlor tricks for so long before they move on to the next British wizard novel or homoerotic vampire saga.

Imagine if you will, how excited the entire Christian world was when a pair of archeologists unearthed the twenty-two lost books of the bible. That these books were found just thirty feet below a demolished J. Crew Outlet seems a bit suspicious to me, but then so does the fact that each page is printed on dot matrix paper. Faith being as it is, however, the good people of the Jesus gang are bound to these new words of God, regardless of how suspect they are. I'm not a religious kind of guy, but I did find a few redeeming qualities in these new "books."

BOB: I'm glad you pointed this out to me, because I had no idea The Bible was renamed "Harry Potter and the One True Savior" in 2056 in attempt to curry favor with young readers. But one thing I can say about this bible that I couldn't say about the old one: too much sudoku.

JOSH: Agreed. I found it initially acceptable and eventually annoying that the Book of Numbers started off as a simple parable about a Japanese lumberjack trying to come out to his parents, but then around verse 20 it turns into a series of numeric problems which I have neither the time or patience to solve.

BOB: And I don't get some of these new "lost" prophets. Like, what the hell is up with the Book of Steve? Just sounds like a guy who's rolled one too many doobies. Check it out: "The Devil shant harshest my buzz; he, the captain of bringdowns." Steve 13:3-5

JOSH: "And lo, he sayeth unto me 'Steve, thou hath dropped out and will never amounteth to anything." Steve 33:6-10

I know it was quite a ways into the new books, but did you get around to reading any of the Book of Reggie?

BOB: Is that the one that consists of 80 pages of inaccurate and irrelevant maritime law?

JOSH: You're thinking of the Book of Chaz. The Book of Reggie was the one about the blind guy who Jesus refused to heal because of some outstanding carpentry debt or something. Anyhow, he spends like fifty pages just roaming around picking fights with apostles. I've never adhered to the specific teachings of any particular religious sect, but I have to admit that I found real inspiration and guidance in Reggie.

BOB: Well, this bible came with free POGs, which is way more than the original bible had ever given me.

JOSH: That's because the guy at the Books-A-Billion liked your SA Tank Top. I got the paperback version with a creepy "about the author" insert. Who the fuck is Dr.Jesus Thomas?

BOB: Apparently he hails from "the fabled underwater continent of Africa."

JOSH: Author of The New York Times Best-Seller, "The Unbendable Pecker." I don't trust these credentials.

I'm parched, Bob, and low on sodium. Let's move on.