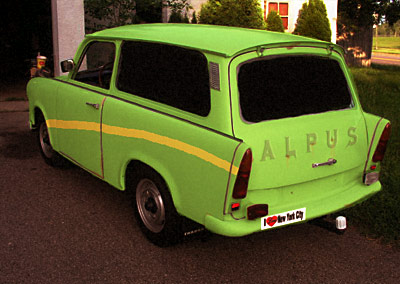 Fifty-six kilometers per hour is the maximum speed of the 1978 Volstrada Alpus when traveling on a level surface. There is no velocimeter in the Alpus, but Nils has calculated this top speed by counting the intervals between roadside markers. By his estimation, they have been traveling at this maximum velocity since the expedition's sudden departure from the Affordolodge in Durning.

Connecticut has put both Nils and Beauregard in a foul mood. Neither man is eager to speak of their abuse at the hands of the Gendarmerie, nor of their subsequent encounter with shackled warlocks and their gloating gaolers at the Affordolodge. It is Beauregard who finally breaks the silence and asserts that it would be best to simply look ahead and not obsess over recent events.

Nils agrees in principle, but his simmering anger causes him to complain tangentially. He rages at the handling and cramped interior of the Alpus. He compares her Thuringian builders unfavorably to a species of hateful goblins constructing torture devices disguised as automobiles. He moans about the Alpus's engine and the way it is rapidly consuming their stores of rosin.

Like a petulant child, Nils even shouts that he skipped over breakfast. At Beauregard's insistence they pull off the road at the first sign advertising a restaurant.

They follow the hand-painted signs to a flat-topped lunch shack with a counter and worn stools open to the air. They sit down and each have a cup of tinned Caffo and a baked turnip that is soft and buttery and filled with a scalding-hot globule of rich cheese. 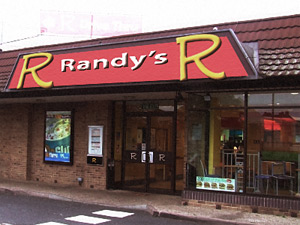 The bewhiskered man behind the lunch counter brags that he has developed a technique to inject melted cheese into turnips and then bake them, transforming an unappetizing staple into a delicious hot lunch. Nils and Beauregard agree that his technique is a success and Beauregard suggests that he sell it to a business concern.

The man becomes sad and explains that he gave away the secret to a customer in a fine hat some weeks earlier. The customer seemed quite keen on the cheese turnip and asked many questions about the cooking process. The lunch man scratches his whiskers, shakes his head, and says that the customer with the fine hat must have stolen the technique: Desirable Food Amalgamated is now offering the cheese turnip in all 20,800 of their Randy's restaurants.

Nils notes that there are even Randy's across the sea in England and the rest of Europe. This plunges the lunch man into an even deeper depression. He seems hurt by the idea of Russians eating his cheese turnips.

Beauregard offers his condolences and a whole dollar as a tip. The despairing lunch man sits down next to the sizzling turnip rotisserie and begins to sob. Nils and Beauregard return to the road, a bit more upset than before, but at least having full bellies.