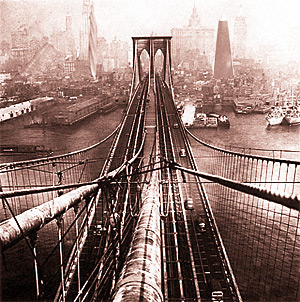 Gleaming towers ascend to the heavens like columns supporting the roof of the sky. Each twisting spire is a wonder of architecture. As the Alpus approaches on one of many elevated motorways both men marvel at the buildings they recognize from films and posters of New York.

Beauregard points out the Woolray Building, shaped like a birthday candle and chased in gleaming copper and gold. He also spies the angled Tipperton Tower, a seeming impossible feat of engineering that appears as though it will succumb to gravity at any moment.

Nils spots the white-capped teat of Madison Square Aerodrome, the world's largest indoor aeronautics venue. Such are the crowds that attend events at the Aerodrome that one of the city train lines runs directly to a station on the roof. Just before a performance the huge outer doors facing the street are opened hydraulically to accommodate the performers and their aeroplanes.

Neon and mechanical advertisements sprout from rooftops along the motorway. The signs depict men chewing Nutty Toast or drinking a hot cup of Caffo. Pretty ladies a hundred feet tall and made from light extol the virtues of shaper garments, battered onions, astroman pens, and any other thing that can be sold. Their glowing, hypnotic eyes seem to follow the Alpus as it speeds past.

New York is a living testament to the power of American capitalism. For those men who truck in stocks, bonds, and currencies this is the holy city. To twelve million Americans, New York is home.

Nils is now too distracted by the breakneck pace of traffic to wonder at the city or the many garish advertisements. Six-tyred Hudson Embarcovans, Nash Scudas, Checker Taxis and sleek Plymouth Supers rumble past. Their engines are as big as the whole of the Alpus and blinding clouds of smoke spew from their exhaust pipes. Nils is wary, but refuses to be intimidated by the larger and faster American automobiles.

Beauregard, having fewer demands on his attention, gladly gawps as more sights become visible from the elevated motorway. 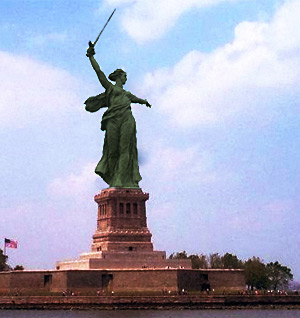 There is Lady Liberty, holding aloft the sword representing justice and strength. She stands sentinel over Manhattan Harbor as a ten-stack steamer passes beside her. For 200 years she has been the first sight to greet immigrant or invader.

There is the windowless black obelisk of Wall Street, gargoyle faces leering from the aluminum pyramid that caps the famous 100-story building. Beauregard swears even through the din of the motorway he can hear the excited murmur of the thousands of traders in their coupolas.

There! There! Beauregard sees a hundred incredible landmarks that could fill a dozen books of architecture. He snaps photographs as quickly as he can to commemorate their momentous arrival.

Finally, they approach the tiled gullet of the City Tunnel. The intimidating entrance has been styled into the shape of a woman's open mouth. A trick of shadow and sunlight has been cleverly used by engineers to create the illusion of teeth rising up from the roadway. The Alpus speeds through the illusory incisors and Beauregard, caught unaware, gasps in relief.

Sodium lights flash by overhead and create a dizzying stroboscopic effect. After only a few minutes the Alpus buzzes onto the streets of New York, amongst the immense buildings. Beauregard says he feels like an ant crawling through a forest. Nils cranes his neck and says he feels like a mouse peering up the skirt of the lady of the house.