Beauregard is speaking to Penelope on the car telephone and relaying her instructions to Nils. The Alpus travels down a corkscrew motorway, descending from the street level into the cavernous depths of the old city. Penelope's voice is soon lost in static.

Dutch Harlem is just one of the nine Burroughs of York on which New York has been built. The old city is steeped in tradition and history, but it is also a place of intrigues and violence. It is a subterranean underworld that is in many ways culturally frozen in the early days of York.

When the Alpus reaches the bottom of the corkscrew, Nils switches on the headlamps and pauses to orient himself. This briefly interrupts the flow of traffic and the Volstrada is nearly crushed beneath the tyres of a garbage truck the size of a barn.

Nils ignores the shouting of the garbage men and peers up at the metal grates that make up the roof of the old city and the floor of the new. Beauregard shifts uneasily at the violence of the threats being pronounced on their mothers by the garbage men. Just enough daylight spills through the grate to allow Nils to locate the sun and reorient himself.

To the great relief of Beauregard, Nils at last disengages the Alpus's third brake. He pilots the auto unerringly to Le Hotel Bruxelles. It is there that Penelope has arranged for Beauregard to let an apartment during their stay in York. 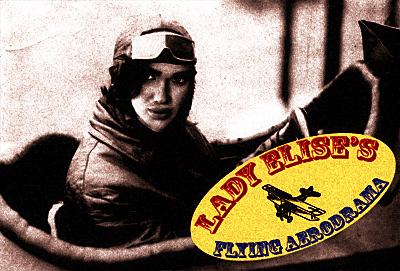 The hotel is a stout and very long building made from brick. Its leaded windows are deep-set in mortared stone frames. Iron ivy climbs the disused chimney. Handbills for Lady's Elise's Aerodrama are plastered to the walls, covering up red stars and slogans of the Panther Army revolution. Beauregard looks at the grainy photograph of Lady Elise and his heart skips a beat. Nils agrees that she is very beautiful. Beauregard tears one of the advertisements form the wall and stuffs it into his coat pocket.

A porter in an animal mask helps them with their luggage. He and the other workers at the hotel are members of the Panther Army, one of the many gangs that compete to run the old city. Le Hotel Bruxelles is their headquarters, but they also operate it is a working hotel. A waiter in a spotted jaguar mask pushes a food cart past them. A small woman with ebony skin adjusts the straps of her tiger mask. She greets Nils and Beauregard and leads them to an office.

Nils and Beauregard are introduced to C.C. Sequoia, leader of the Panther Army, known also as the Last Black Indian. He is polite but very serious. He wears a leather coat, a black panther mask, and his hair glistens with exotic oils. The woman wearing the tiger mask serves up cups of bitter Caffo while C.C. explains the Panther Army's tenets and gang alliances.

Communalism and community is superior to capitalism and individualism. Violence is reserved for the system, which is the vague force controlling all evil in the modern world. The Short Ties, the Traders, New Towners, and the Lawmen are friends of the system and enemies of the Panther Army. 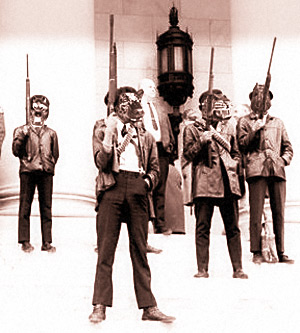 C.C. laughs when he learns that Beauregard and Nils are tourists on a cross-country expedition. He slides a lavender handkerchief under his mask to wipe tears of laughter from his eyes. He warns that people come to the old city either looking for trouble or running from it. Anybody else is going to find trouble.

Beauregard asks C.C. about Lady Elise and the Aerodrama. C.C. smiles knowingly. She is the most beautiful aviatrix in America, but she is also, after all, part of the new city.

Nils asks about a tour guide for the old city, but Beauregard persists with questions about Lady Elise. In response to both, C.C. leads them to another room where men in cat masks are recording radio propaganda.

DeShaun Vondel is stocky, short, and wears a pair of black-framed glasses over the eyeholes of his cougar mask. C.C. tells Nils and Beauregard that DeShaun knows the old city as well as anyone and he works in Madison Square Aerodrome, down in the pipeworks. Someday he will sabotage the pipeworks for the Panther Army, but for now he can take Nils and Beauregard to see the Aerodrama.

C.C. gives Beauregard a sealed envelope and tells him that he must give it to Lady Elise if they should ever manage to meet her. Beauregard agrees at once, thrilled simply by the fantasy of shaking her hand and standing close enough to smell her hair. Fortunately, Beauregard does not speak of his enthusiasm.

C.C. leaves them with DeShaun. The stocky young man speaks in a deep voice, like a volcanic booming heard and felt from deep within the earth. He explains solemnly that to get to Madison Square Aerodrome they will have to travel late at night through the most dangerous parts of old city.

The territory controlled by the Dolorists.