EXPECTATIONS: It doesn't seem that long ago that we got our first glimpse of Ashton Kutcher in his Steve Jobs get-up, teasing the biopic absolutely no one was asking for. Now that it's here, Jobs (previously stylized as jOBS) has all the hallmarks of a rushed production. I'll be surprised if this turns out to be anything more than an attempt to beat Aaron Sorkin's own Jobs biopic to the punch.

REALITY: Almost by definition, biographies are made by people who are fascinated with their subject. Authors and filmmakers have to be at least somewhat interested in whose story they're telling. Otherwise, why bother? Sooner or later, though, that interest becomes obsession. In the case of director Joshua Michael Stern, it becomes borderline propaganda. That's not to say that Jobs is a film made by die-hard Apple Kool-Aid drinkers, but at a certain point its portrayal of Steve Jobs stops being an examination of a genius and instead becomes the endorsement of a maniac. 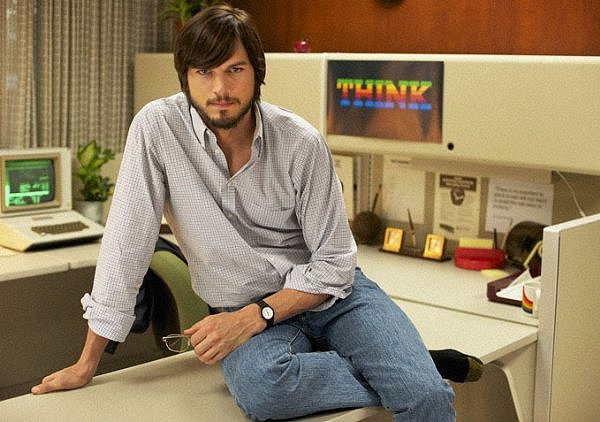 Hello, ladies. Let me tell you about perfection.

The film opens in 2001, as Steve Jobs (Ashton Kutcher) unveils the device that will eventually rule the world: the iPod. We then jump back to the 1970s and Jobs' days as a college dropout. While working at Atari, Jobs and his buddy Steve Wozniak (Josh Gad) develop the very first Apple computer. With funding and financial guidance from Mike Markkula (Dermot Mulroney), Jobs builds Apple into one of the biggest names in the industry. His vision and demand for perfection wind up getting him kicked out of his own company in 1986, but by the mid-'90s he returns to set things right and put Apple back on the path to world domination.

Jobs hits all the major points of the man's life between 1974 and 2001, but in doing so it ends up as a frantically paced series of montages recounting Apple's greatest hits. The most damning issue is that there's simply no drama in any of this. It portrays the corporate power struggles and personal issues, sure, but every last one of them plays out as a hurdle for Jobs to leap over on his way to becoming the greatest man in the universe. When Kutcher's Jobs stares down computer-industry obstacles played by the likes of J.K. Simmons and Matthew Modine, there's the genuine sense that he considers them inferior, and the film tacitly agrees. 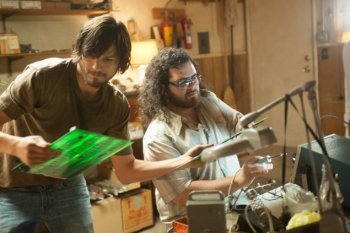 Hey kids. When you grow up, this is what work looks like.The film makes no bones whatsoever about the fact that the founder of Apple was an egomaniac, a man so driven to succeed that he shunned his firstborn daughter because he saw her as a distraction from his life's work. As terrible as this may seem, it's portrayed less as a deplorable character flaw and more as necessary means to an end. "Yes, Steve Jobs had a number of undesirable traits," the film seems to say. "But who are we to judge the one who brought us that manna from heaven known as the iPad?"

In fact, it's disappointing that the film doesn't explore Jobs' family life in more detail. The brief glimpses we see illustrate that these are the relationships that truly make this man tick, but Jobs is just as eager to push them by the wayside as the man himself was. Perhaps it's because the film is more interested in Jobs's accomplishments rather than his personality. That's fair, but then why include his daughter Lisa as a character at all? Why feature an entire segment about Jobs developing the Macintosh to directly outperform Apple's own Lisa computer? The character's constant drive to overcome his flaws extends to his drive to overcome his family, but the film barely scratches the surface.

For the better part of two hours, Jobs reminds us in no uncertain terms that you're either on board with Steve Jobs' maniacal obsession with his product, or you're not, and if you're not, then you can just fuck right off. We witness a number of Jobs' presentations and speeches, and while Ashton Kutcher is remarkably on-point in selling it, that's still precisely what he's doing: He's selling. The film presents these moments almost like historical speeches. Just as General Patton spoke to the troops in front of an American flag, so too does Steve Jobs address his shareholders in front of a giant screen projecting his own face. It didn't strike me just how blatantly this film was preaching to the choir until I realized the guy next to me in the theater had been clutching and stroking his iPhone from the very first scene.

Even beyond the film's oddly sycophantic tone, its structure offers no sense of tension or drama that would necessitate a two-hour motion picture. It takes great care to drop as many little tidbits about the man as it can, but to little effect. For example, Woz informs us that Jobs was a fruitarian. Why do biopics feel the need to do this? It's important to show us the man as he was, painting a portrait through actions, decisions and statements, but peppering a film with factoids for the sole purpose of having them feels like a waste of precious time, especially in a film this frenetic. 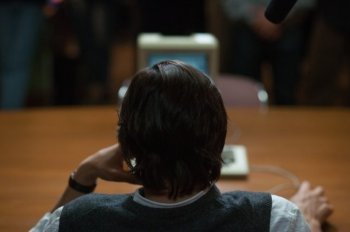 The film puts you in the shoes of whoever is standing behind Steve Jobs!

Ashton Kutcher's portrayal of Jobs' mannerisms is uncanny, particularly as he bounces through scenes mimicking the man's walk. The fact that Kutcher isn't more effective in the role is mostly the fault of Matt Whiteley's script. Covering such a huge span of the man's life only serves to give us snapshots as he evolved through the decades. Show us the Steve Jobs whose trip to India as a young man changed the course of his life in amazing and profound ways. Don't just show us the Steve Jobs who shouts down employees while wearing sandals. This leaves Kutcher's job feeling less like a good performance and more like a pretty neat impersonation.

MINORITY REPORTS: Somewhere in his fortress carved into a mountain in Northern Washington, Bill Gates sits, writing out the screenplay for DOS, the epic adventure of his life. "If Google and Apple get movies, I do too!" he cackles. His waitstaff are all afraid to tell him that both of those movies suck, because they know he has a Death Ray and will not hesitate to use it. - Martin R "Vargo" Schneider